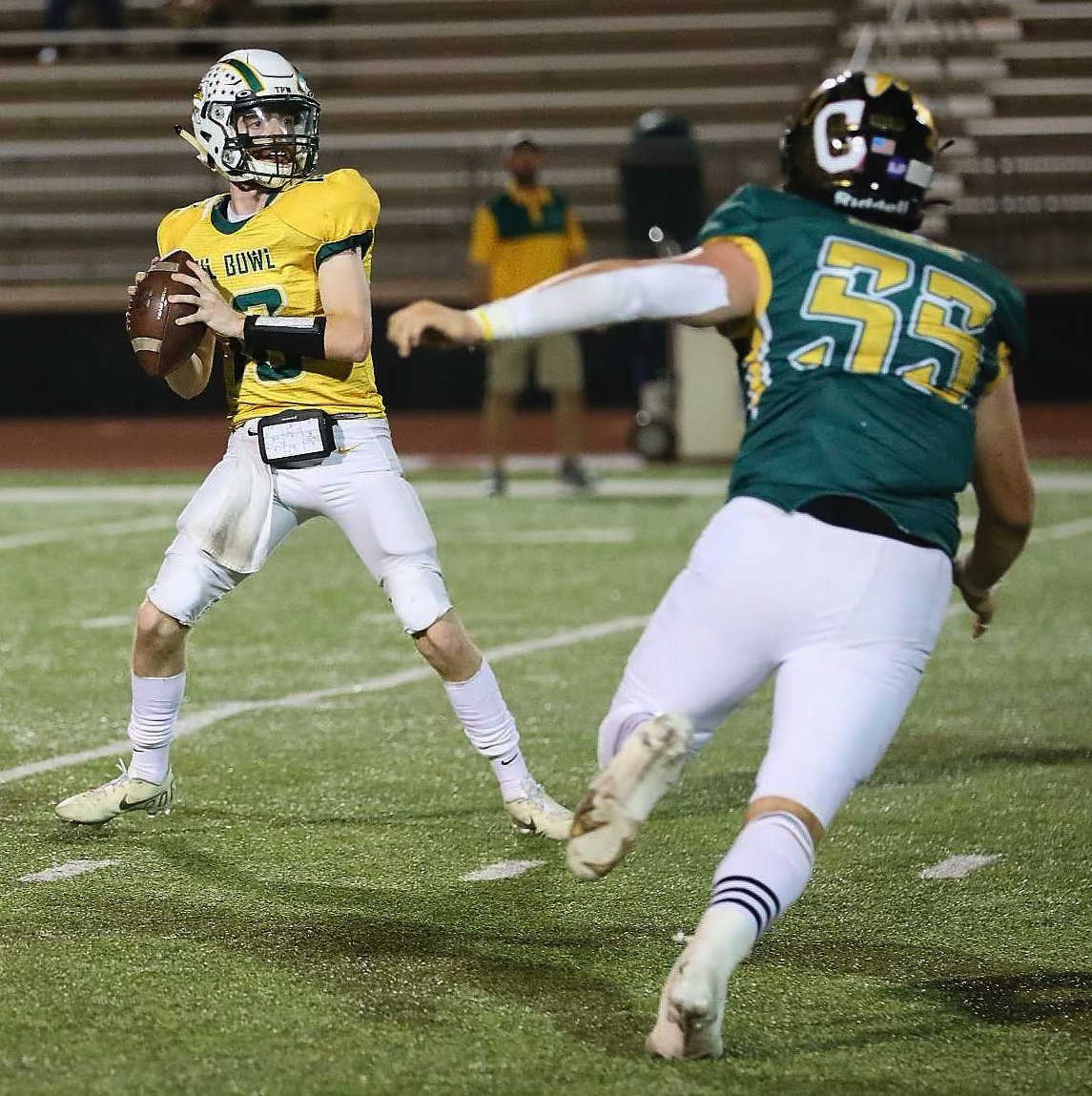 High school athletes have strange journeys sometimes. Often it involves multiple moves, such as the case of former Aledo student Major Youngblood, who found himself at three different high schools throughout his career.

Youngblood moved to Aledo in the fifth grade and started playing football right away. However, he found himself playing behind the youngest of the Bishop brothers, Jake. Youngblood spent his sophomore year at the junior varsity level.

After the 2019-20 school year came to a remote end because of the COVID-19 pandemic, Youngblood’s father moved from his north Fort Worth home to an apartment in Weatherford. Youngblood made the decision to move in with his father and attend Weatherford in the 2020-21 school year.

“We were very fortunate to be able to do that,” Youngblood said. “It just really seemed to be in God’s plan. It wasn’t meant to be here in Aledo.”

Playing under Aledo alumnus Billy Mathis at Weatherford, Youngblood was named the backup to starting quarterback Ryan Clark. The first game of the 2020 football season saw the Kangaroos take on Aledo at Globe Life Park in Arlington.

“I knew that it wasn’t going to be given to me,” Youngblood recalled. “I had to go out there and earn it at Weatherford. There was some kind of feeling about playing Aledo. That’s a tough first varsity game. It was surreal.”

On the third drive of the game, Clark went down with an injury and Mathis turned to Youngblood.

“They threw me out there and it was definitely ‘baptized by fire,’” Youngblood explained. “Guys were all over me, we were able to come up with a scoring drive and that felt amazing.”

Clark eventually came back and the two quarterbacks alternated playing time throughout the season, ultimately leading the Kangaroos to a 5-5 record and a playoff berth. However, Weatherford fell to Haslet Eaton in the first round of the playoffs 21-14.

After the season, Youngblood’s father was looking to upgrade from his apartment and buy a house. After a long and tedious process, he bought a house in Benbrook and Youngblood was again on the move.

“I figured I’d give it a go at Benbrook,” Youngblood remembered. “It was kind of one last hoorah for senior year, let the chips fall where they may. That’s exactly what we did and it was great, I loved Benbrook.”

The Bobcats dropped their first three games of the year, including a tough loss to Mineral Wells. When district started, Benbrook needed a spark and found it against Fort Worth Dunbar with a 23-12 win. The Bobcats then won their next five games, setting up a district championship matchup with Kennedale.

However, the Bobcats were no match for Kennedale and they fell unceremoniously by a score of 63-0.

In the first round of the playoffs, the Bobcats faced 4A contender Midlothian Heritage, who came out of one of the toughest districts in the state.

Benbrook fought hard but came up short 49-20. One consolation was that Youngblood’s final high school football snap was a 33-yard touchdown pass.

It seemed as though Youngblood’s football career was over, and he would turn to baseball. Then one fateful day, he got a call that gave him one last opportunity in one of the oldest all-star games in Texas.

The Oil Bowl has been played in Wichita Falls since 1938. It used to feature all-stars from Texas playing all-stars from Oklahoma. However, it has recently changed to East Texas vs. West Texas.

“My coaches are from the Wichita Falls area,” Youngblood mentioned. “They were really pushing for me to go and they put my name out there. They reached out to me and said they would love to have me.”

Due to renovations at Memorial Stadium in Wichita Falls, the game was moved to nearby Iowa Park.

Representing the East All-Stars, Youngblood did not get the start but saw quite a bit of playing time. With a little less than five minutes remaining in the first half, Youngblood brought his offense to the line, dropped back and delivered a perfect strike to Whitesboro’s Jake Hermes for a 12-yard touchdown.

“I was nervous because I hadn’t played in seven months,” Youngblood recalled. “There were definitely some jitters, but after the first time getting hit, it brings you back to focus. Then that first touchdown felt just incredible. It was just like - wow!”

The score put the East up 21-0, and they would end up taking a 28-0 lead into halftime. The West responded in the third quarter, but Youngblood put it away just three seconds into the fourth quarter with a 17-yard scoring strike to Lake Worth’s Nathaniel Sessions.

“That one was equally as cool,” Youngblood reminisced. “I definitely helped my team and contributed to our success. That was the coolest thing to me.”

Youngblood finished the affair going 7–for-12 for 68 yards and two touchdowns, and the East came out victorious 42-14.

Youngblood’s future is in the air at the moment, but he is leaning towards walking on to play football somewhere close by if no baseball offers come his way.

This article appears in the July 29, 2022 issue of The Community News.