Now a Bearkat with a ‘K’ 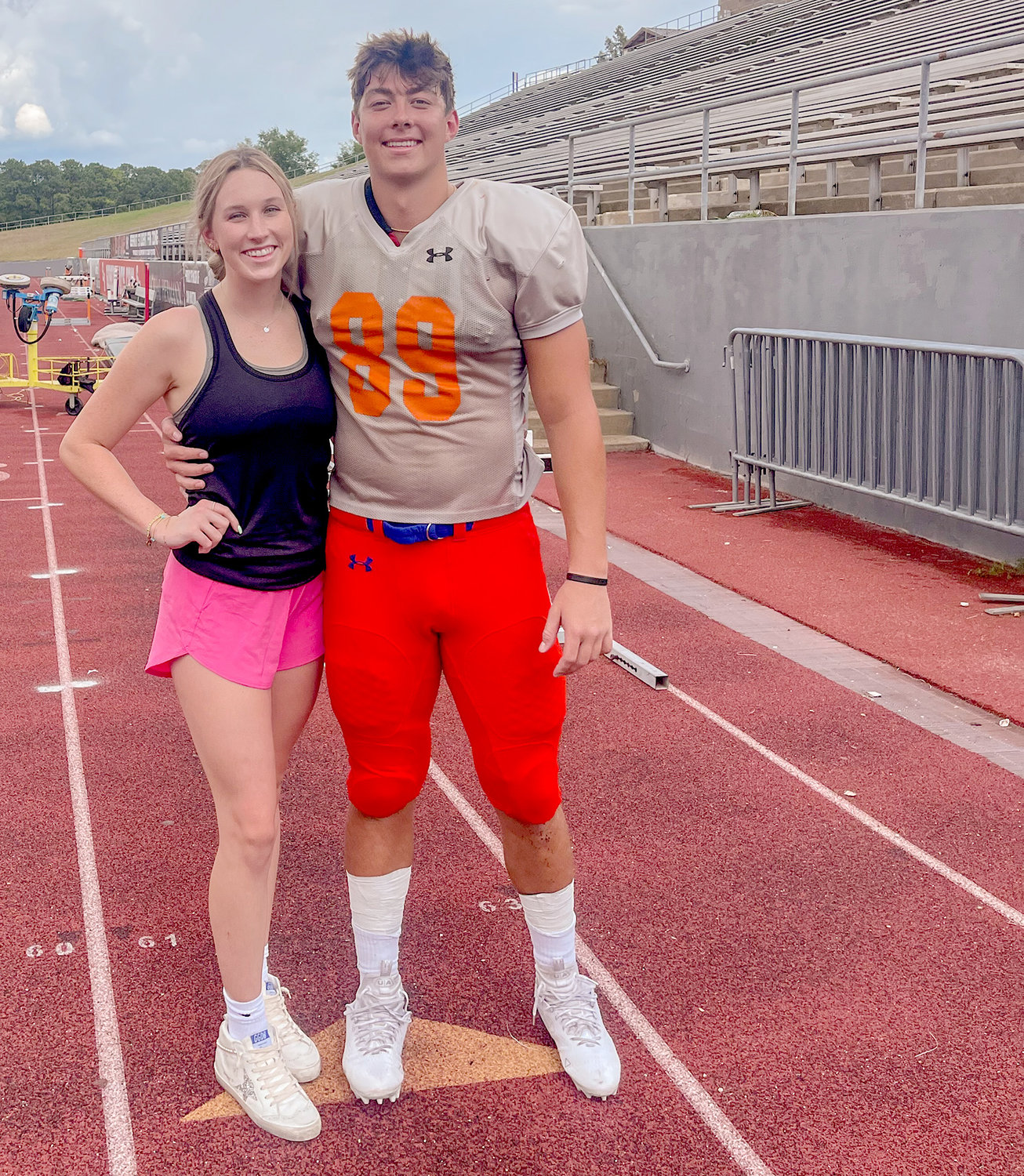 Former Aledo Bearcat state swimming champion Elijah Sohn is switching from swimming to football and transferred from SMU to Sam Houston State. He is pictured with his girlfriend Sydney Stafford following a preseason scrimmage. The Bearkats open the season Saturday at Texas A&M, where Sohn began his college career.
Special to The Community News
Posted Saturday, September 3, 2022 10:45 am

I have been playing football for about a month now, and am very excited to play my first game on one of the biggest fields. It truly points to how big God is. On my own, none of this would have been possible.”
Elijah Sohn
By Rick Mauch
The Community News

The collegiate journey of former Aledo Bearcat swimmer Elijah Sohn continues. This time, however, he's switching sports and he's becoming a Bearkat again — albeit now with a “K.”

Also like Aledo, Sam Houston State has orange in its color scheme.

“I decided to switch to football not on my own strength, but through prayer and wise council. It was a decision that took a lot of faith to walk out while not seeing a lot of results,” Sohn said. “The process started when I was swimming at SMU and the new head coach Rhett Lashlee came into the weight room, introduced himself, and asked what position I played. At the time I was sitting at 220 pounds, the heaviest elite level swimmer in the world.”

Ultimately, Sohn said his reason for change was a religious one.

“God has blessed my family with physical talent and size. I knew I wanted to use it to glorify my King and Savior. However, swimming had become something in my life that was no longer glorifying the one who gave me my talent as it had become a ‘Look at me and what I can do,’” he said. “I never want my life to point to me, but rather Jesus as He has changed and saved my life forevermore. It was time to step away from swimming, but I still had this athletic talent that I knew God wanted to use, on and off the field.”

Sohn hasn’t played football since his freshman year at Aledo, when he was much shorter than his current 6-5 height and weighed less than half of the 245 pounds he does now.

‘It has been an adjustment for sure, as the last time I played football I was 5-6, 110 pounds. However, as a testament to God who has placed me here to glorify Himself, I have adjusted very quickly,” Sohn said. “My body feels great and It has been so fun learning and getting better every day. Every practice I get to thank God for the opportunity He has given me.”

Sohn, a tight end, will wear number 89. It was his younger brother Isaac’s number all throughout Aledo youth football.

“Coach Buc has always said I should have played football. When I first started talking to him about it he had told me I could have a future in this sport and make a lot of money doing it,” Sohn recalled. “I am not concerned with the money involved as I live my life ‘seeking first His Kingdom and His righteousness and all else will be added unto you.’ But I am very grateful for his support and connections to the college football world. He never doubted that I could not only play college football, but also be very successful doing it.”

Buchanan said of Sohn, “He’s a tremendous athlete. When he came in about a year ago and worked out he took his shirt off. I said, ‘Put your shirt on, you’re embarrassing me.’

“For somebody who hasn’t played since ninth grade, that’s amazing. He’s a special athlete - and a good kid.”

A 2020 Aledo graduate, Sohn has enjoyed success as a collegiate swimmer. His career began at Texas A&M, where he earned honorable mention All-American status as a freshman as the anchor of the Aggies' 400 free relay at the 2021 NCAA Championships.

He transferred to SMU, but saw limited action for the Mustangs due to an injury, competing only in the season-opening SMU Classic. He was named to the American Athletic Conference All-Academic Team this past season.

“I haven’t done it alone. The very first day I decided I was going to embark on this journey I met Jermichael Finley at the Aledo indoor (facility). Looking back it was no doubt a God-given relationship,” Sohn said. “He instantly saw my potential and started training me. He pushed me and encouraged me every day. What started a relationship built around physical training quickly grew into a relationship centered around a gratitude for Jesus.”

“I am very excited to go back to A&M and play on Kyle Field. It’s a huge stadium and a very large opportunity to get to point to Jesus,” Sohn said. “My girlfriend still goes to A&M and is excited to watch me on the field, as is my family.

“It is my dad’s birthday on game day and he will get to see me play in front of 110,000 people. God’s hand of favor has certainly been upon me in my time here. I started fall camp at the very bottom of the depth chart. For the first game against A&M I am starting on kickoff return as well as field goal and PAT (point after touchdown). I will also likely get reps at tight end.

“I have been playing football for about a month now, and am very excited to play my first game on one of the biggest fields. It truly points to how big God is. On my own, none of this would have been possible.”

Competing for coach Tiffany Williams at Aledo High School, Sohn was a four-time letter winner and a Class 5A state champion in the 200-yard freestyle. His time of 1:37.02 in 2020 is a state record.

Sohn was also named the 2019-2020 Texas Christian Athlete of the Year.