Entering district on a strong note 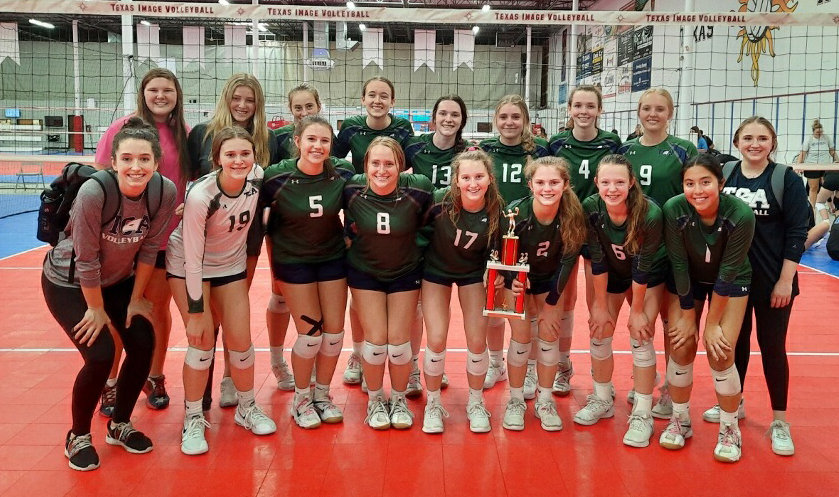 The Trinity Christian Academy Lady Eagles captured the Silver Bracket championship in Fort Worth Christian PIT Tournament on Aug. 19-20, followed by a split of matches the following week.

The Lady Eagles, 11-6 on the season, took the Silver Bracket title with a hard-fought victory against Southwest Christian, 25-23, 24-26, 15-13. Senior Bella Sigala led the Lady Eagles with eight kills and 11 digs. Junior Faith Brooks had six kills and 10 assists.

The Lady Eagles opened up the following week on Tuesday, Aug. 23, with a 3-0 sweep against Fellowship Academy. Junior Caroline Thompson led with 11 aces and nine digs. Senior Margaret Cowley had five kills and three aces, and Sigala added another five kills.

On Thursday, Aug. 25, the Lady Eagles dropped the fifth set to High Point Academy after an exciting fourth set that TCA won 33-31. Sigala led the way with 15 kills and four aces. Freshman Sadie Gough had four aces and 24 assists, and freshman Emily Ickert had nine kills and 11 digs.

TAPPS District 1-4A play begins on Thursday, Sept. 8, against Pantego Christian in Barber Gym at 6:30 pm.

“Our district is one of the toughest in TAPPS 4A. I am extremely excited about district play,” Lady Eagles coach Jessica Sims said. “We are strong defensively, and we are seeing the hard work that the athletes put in during the spring and summer come to fruition. Our setters are solid, and they have done an excellent job in setting up our front row.”

The Lady Eagles volleyball team wrapped up their pre-district schedule with a pair of road sweeps this past week.

Trinity was hosting Pantego Christian in their Texas Association of Private and Parochial Schools District 1-4A opener at press time. They travel to Arlington Grace Prep Tuesday, Sept. 13.