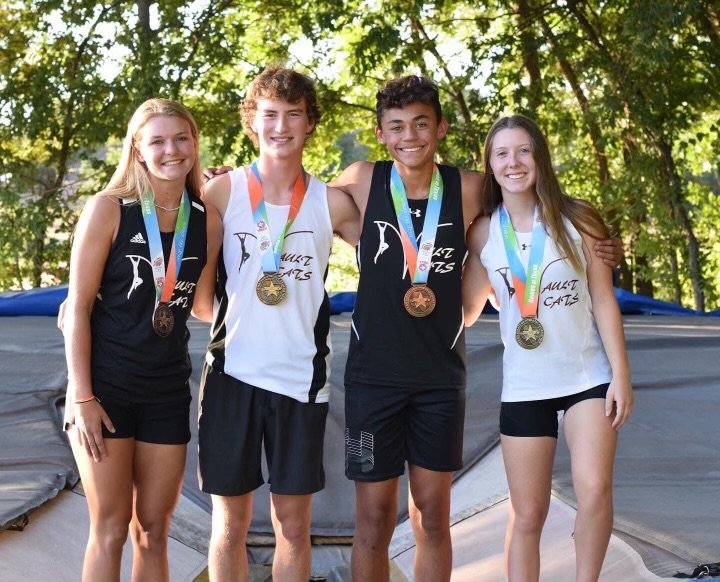 As the summer comes to a close and school sports start kicking off, the final national events for summer sports are taking place. For five Aledo students, it all comes down to the Pole Vault Summer National Championship in Navasota.

Sean Gribble, Brad Campbell, Braylon Brown, Taylor Hindman, and Claire Campbell are all a part of the VaultCats Pole Vault Club located between Aledo and Azle. All five qualified for the national meet by medaling at the state meet in Corpus Christi.

VaultCats was started by longtime Aledo pole vault coach John Rhodes when he saw that pole vaulting was taking off at the school.

“When I got to Aledo, more and more kids were starting to jump during the summer,” Rhodes stated. “I didn’t necessarily want the Aledo kids being coached by someone else. So I set up a pit and a runway at my house and it grew.”

The summer program remained entirely Aledo students as a way to keep perfecting their craft during the summer, and the team started going to meets. Then, after Rhodes retired, it expanded past Aledo.

“It was kind of like having an open weight room or open gym,” Rhodes explained. “They could just come to my house and pole vault. Then, when I retired about that time, I got a few kids from Weatherford and a few kids from Azle and that summer I had about 40 kids.”

Despite being retired, Rhodes is still allowed to coach the Aledo High School pole vault team. The University Interscholastic League rule states that a retired coach can remain a part-time coach once they have surpassed 20 years of experience.

“The whole reason this started was to make Aledo pole vault better,” Rhodes said. “I’m a school coach at heart. The club coaching has been good to me and been fun, but I still love coaching the Aledo kids.”

The 2022 summer group is possibly the best Rhodes has seen come through his club. Including the five Aledo students, the VaultCats have four more members going to the national meet. A feat so rare in summer pole vaulting.

“Sean Gribble has probably been the highlight,” Rhodes mentioned. “He jumped 15-3 during the school year and has kind of just clicked this summer. He jumped 16 feet and then 16-3 at back-to-back meets. Then, at one of our last practices he cleared 16-8, which is an inch over the school record.”

Because it was for a club, and it was a practice jump, the jump does not count towards the school record. However it is clear that Gribble’s goal is to break the record.

“That’s a great turnaround,” Rhodes exclaimed. “To go from 15 feet during the school year to then jump 16 feet three weeks in a row, that’s incredible.”

Gribble is the only one among the national qualifiers to be an incoming senior. He cleared 16-3 in Corpus Christi to take gold. Brad Campbell took the gold in 16U with a 14-foot jump, while Brown took bronze 13-6. In the girl’s 16U, Hindman took home the silver due to a jumpoff after jumping 11-6. Claire Campbell competed in the girl’s 14U and finished fifth jumping 6-7.

The National Meet will take place from Friday, Aug. 5 through Saturday, Aug. 6.