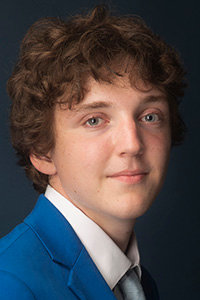 The National Merit Scholarship Program, initiated in 1955, recognizes about 50,000 academically talented high school students each year out of the 1.5 million or so who take the PSAT/NMSQT. About 16,000 of these students (less than 1% of each state’s high school seniors) are selected as National Merit Semifinalists. To qualify as a National Merit Finalist, Semifinalists must complete additional requirements, such as earning ACT or SAT scores that confirm their PSAT performance, receiving a positive recommendation from their principal, and demonstrating consistently high academic performance in high school classes.

About 7,250 of those finalists will be chosen as Merit Scholarship winners in the 2023 competition. Winners can receive scholarships from the National Merit organization, corporate-sponsored scholarships, and scholarships from universities. Shane has completed all requirements, including writing an original essay, to be considered.

National Merit Finalists will be announced in February or March, 2023.

“Shane's intellect was evident in class, but more than that he was always a grounding and empathetic presence who could speak on any topic with maturity,” said Anabel Cruse, TCA Secondary Teacher.

“I am so impressed with Shane’s level of academic output,” said TCA Secondary Principal Jesse Whiteaker. “To score as highly as he did and earn this accomplishment is truly remarkable and his TCA faculty family is so very proud of him. It has also been really cool to see the exciting opportunities that this designation has made available to him.”

Shane is the son of Dr. Mark and Nancy Houston of Aledo. Shane says his three most influential academic teachers during high school at TCA have been Kimberly Cyphert, Jason Breisch, and Anabel Kruse.