Local news from the heart of East Parker County
Weather brought to you by:
Log in
Willow Park

At Tuesday's meeting the Willow Park City Council approved an agreement between the city and Trinity Christian Academy to provide a school resource officer for the private school.

As per the agreement, beginning in October the Willow Park Police Department will provide an officer to be on campus during school hours and activities.

"This is a new position for our agency. However, the officer that will be assigned is already a member of our staff. The vacancy created will be filled at the earliest opportunity."

Per West's request at Tuesday's meeting, the Willow Park City Council amended the Fiscal Year 2023 budget to include funding to fill the vacancy.

Dr. Steve Newby, TCA Head of School, said this is something completely new for the school, but something that is certainly welcome.

"The Willow Park Police have come by, and so has the Parker County Sheriff's Department for special events and such to help with security, but this allows us to have someone here at a moment's notice," Newby said.

"There's people out there that want to hurt our children and we want to make sure that doesn't happen here."

Newby said the SRO will not only provide security, but will also help in areas such as educating students on being safer themselves and watching out for any possible criminal activity. The SRO will also know all the ins and outs of the school and staff.

Newby, who came onboard at TCA in 2016, said this is something he and West have been discussing since she became the Willow Park police chief a year later.

"I really attribute a lot of this to her forward thinking," Newby said.

"The Willow Park Police Department and Trinity Christian Academy recognize that a strong partnership between law enforcement and academia is essential to the safety and security of students," West said. "The Willow Park Police Department is both excited and pleased to partner with TCA to add a layer of safety and security to its prestigious campus."

Newby noted that the school shooting in Uvalde on May 24 might have helped accelerate this decision becoming a reality. On that day a shooter got into the school and killed 19 children and two adults.

"I do think Uvalde raised everybody's awareness," he said, adding, "Part of it is God's timing. I think it was a combination of it all coming together."

A private school having an SRO is a rarity. In fact, Newby couldn't think of another private school that does have one, though some have hired security companies.

"We worked out an arrangement with the Willow Park police that's achievable and works for everybody," Newby said. "We prefer it this way. It's a good fit."

The council approved a change in its meetings. From now on city council meetings will start at 6 p.m., one hour earlier than before.

The Community News was  approved as the newspaper of record for the City of Willow Park by the council.

The holiday schedule for city employees was amended to include Juneteenth. The schedule now is: 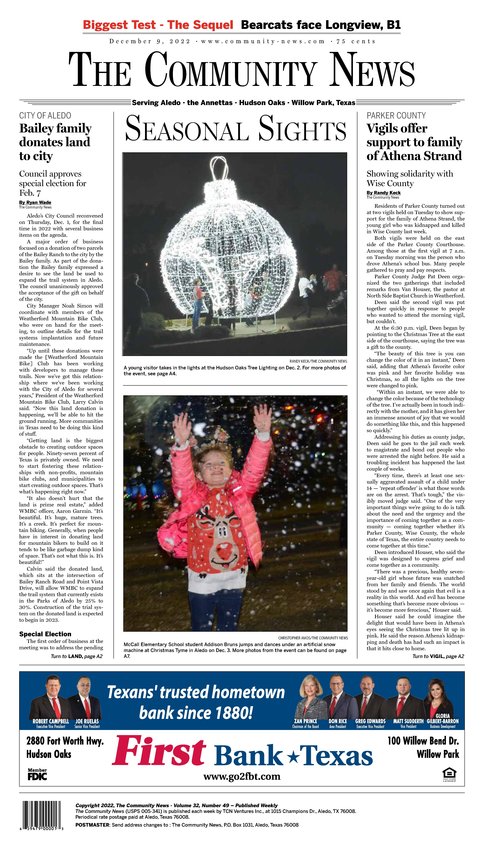