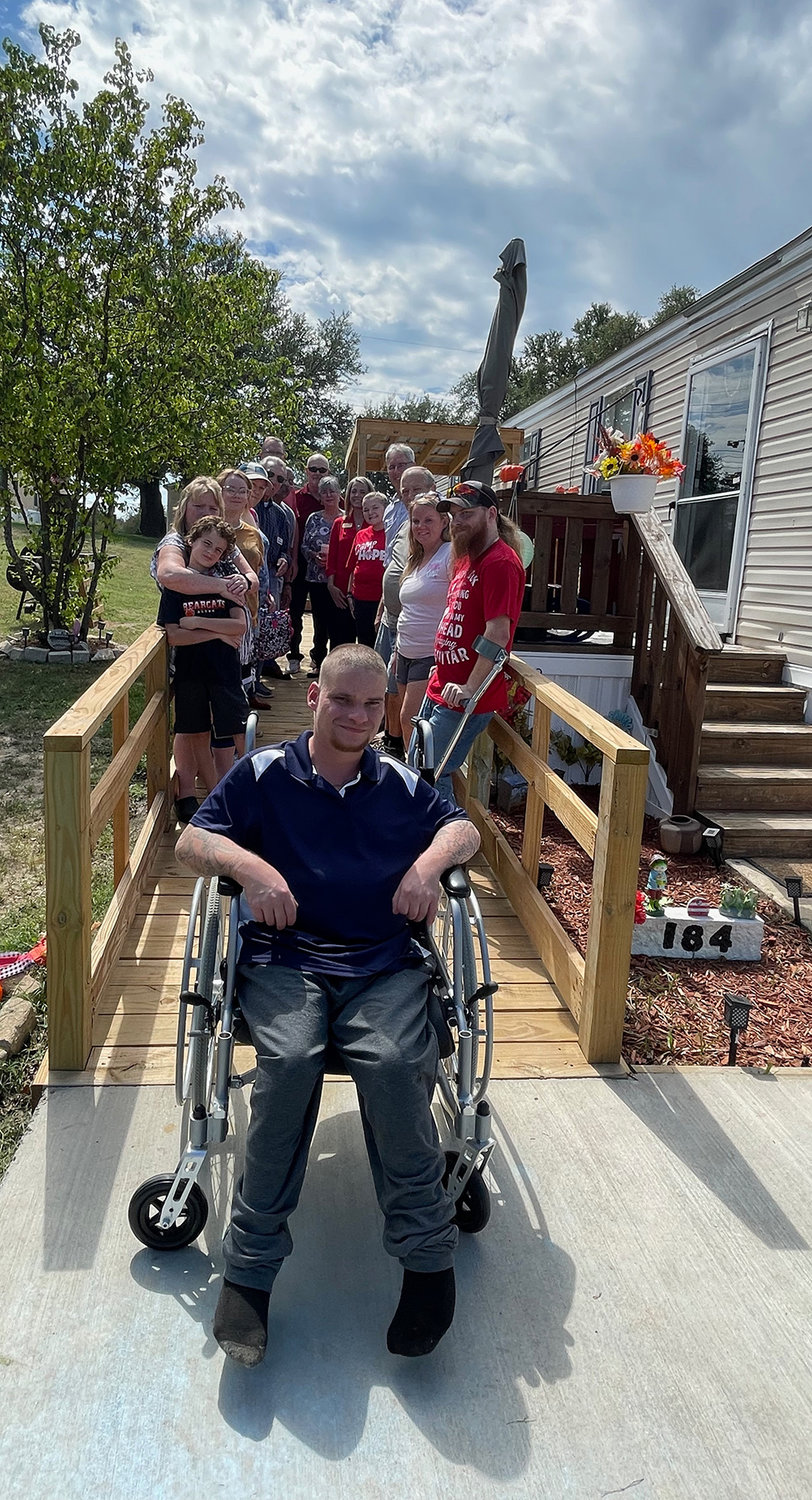 This year was a game changer for Robert Seely.

Seely lives with his mother, Michelle, in the Yes mobile home community of Aledo. Robert, 33, was born with Spina Bifida, a condition in which a baby’s spinal cord does not develop properly.

Robert is now in a wheelchair, but it wasn’t always so. As a young adult he lived on his own and maneuvered on crutches. But in 2016 he had a massive stroke and has been in a wheelchair ever since.

Robert’s movement was restricted because the home didn’t have a ramp.

On Sunday, Sept. 25, the Rev. Troy Miklos from The Summit in Aledo, representatives from the Center of Hope, friends, and volunteers gathered to bless and celebrate a newly-completed wheelchair ram for Robert.

Miklos explained how the ramp came about. In partnership with the Center of Hope, The Summit has participated in Camp Hope each each of the past 12 years in the Yes community. About two summers ago a manager from the community made Miklos aware of Robert’s situation.

Miklos reached out to the family, but the onset of COVID 19 pushed back the plans and preparation for a ramp. Because of the slope, the ramp was going to be challenging.

Craig Brown was retired from a business of designing specialty staircases, and he designed the ramp. The original plan was that volunteers from The Summit would build the ramp in pieces behind their church, but then Miklos had health issues that prevented that from happening.

Miklos took to social media to see if he could find someone to build the ramp, but this was during the post-COVID building boom and he couldn’t find any takers.

“And so it wasn't until construction kind of took a burp earlier this year that I saw Joshua Hope recommended for something. He was the first one I called,” Miklos said.  “What better name to have! He's a neat guy Christian.”

Hope is part of a company that mainly does drywall, but they take on other jobs as well, and they built the ramp and completed it in July.

In the interim, Robert’s mother Michelle, an avid radio listener, heard about Michelle’s Miracles on KSCS. She informed her daughter, who wrote an essay and sent it to the station.

The station put Robert on the air and presented him with a new wheelchair.

Michelle said the ramp has opened a whole new world for Robert, providing hum the opportunity to come and go, and go out with his friends.

On the day of dedication, Robert wheeled down the ramp for a group photo with representatives from The Summit, the Center of Hope, and friends and family.

Miklos, ever the pastor, said a prayer to dedicate the ramp.

“Father, some days the world is so broken. And yet some days we get to celebrate some joys that were unexpected. Who would have thought 12 years ago, when we did our first Camp Hope, that it would lead to today — that we'd be standing here right now. And celebrating the ramp, and some mobility and just the opportunity to just be Christ out in this world that so desperately needs it.”