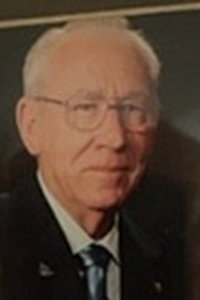 He attended and graduated from Freer High School in 1957, where he met his future wife, Martha Lee Velau Parchman.

Luke joined the United States Air Force in 1958. He started his training at Lackland AFB in San Antonio. Luke then trained in Wyoming before being transferred to Tyndall AFB in Florida. Luke and Martha were married in 1958, and their first son, Robert, was born while they were stationed in Florida. Robert was born on Luke’s birthday, and each year they would celebrate their special day together. Luke was then transferred to Nova Scotia, Canada, and then to Niagara Falls, New York.

Their second child, Cindy, was born while they were in New York. Luke and family were then transferred back to San Antonio to Lackland where he served as a training instructor. He was deployed to Vietnam in 1968-69 and then returned to Lackland.

Their third child, David, was born in San Antonio. Luke and family were then transferred to Eielson AFB in Fairbanks, Alaska. where he served for three years before returning to Lackland.

Luke retired from the Air Force in 1977. He worked briefly with his father in the oil fields of Freer before moving to Somerset, Texas. Luke started working for Somerset as Director of Public Operations. He then spent more than 30 years planning and developing the streets, sewer, and water system for Somerset.

Luke was very active in the community. He was a member of the Masonic Lodge at Somerset, where he is a Past Master. Luke was also president of the Lions Club.

Luke will be remembered for being a humble servant, father, and friend to many.

A funeral Service was held Saturday, June 18, 2022 at Hurley Funeral Home Chapel in Lytle with Interment following at Bexar Cemetery in Somerset.