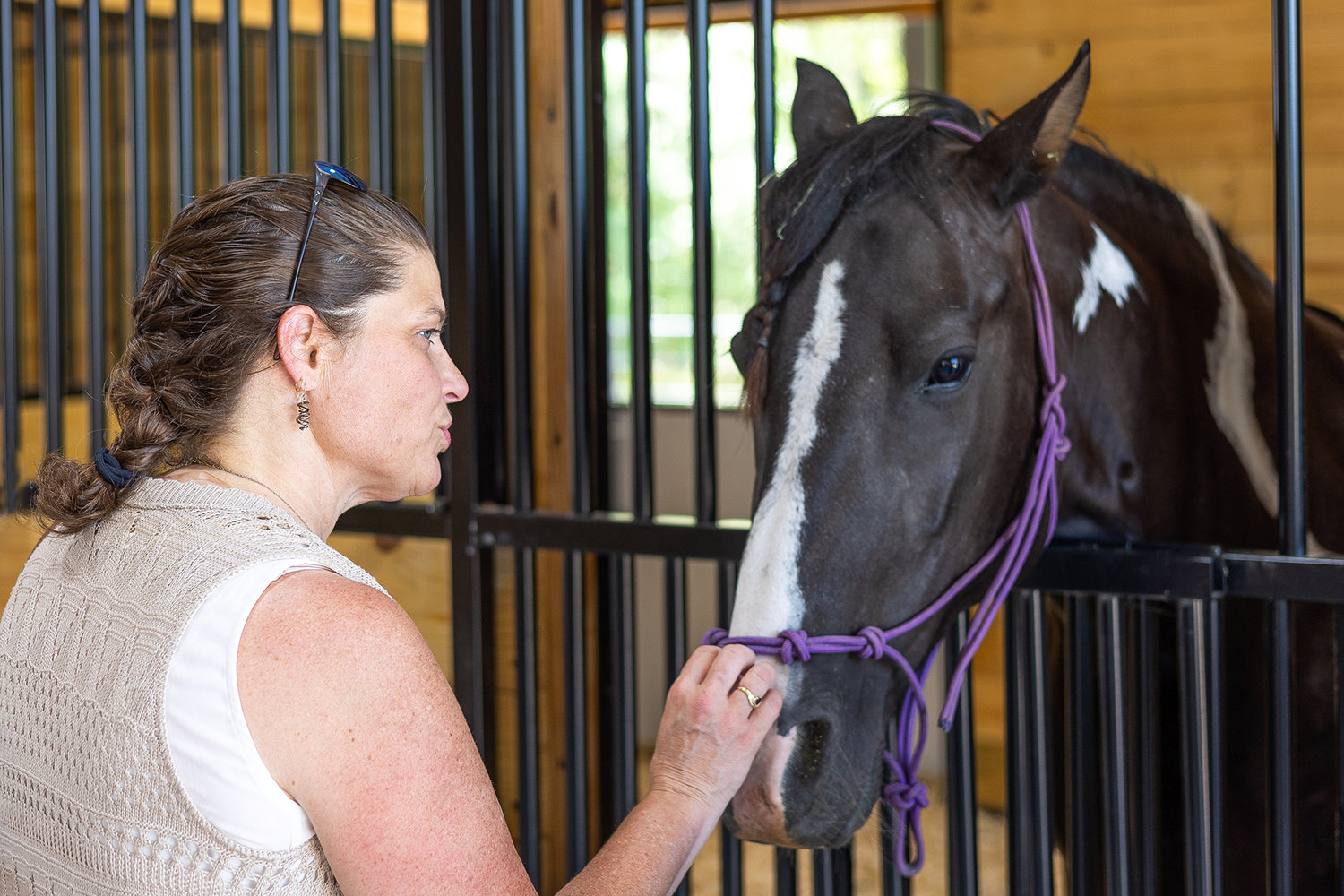 Annetta Mayor Sandy Roberts provides some attention to Shelby, one of the horses at Layla Horse Ranch during its ribbon cutting on June 25.
Trey Freeze / treyfreeze.com
Posted Thursday, July 21, 2022 8:57 pm

Finding your passion, no matter what stage in life, truly changes who you are and what your were created to be. She [Catherine] brings light into the lives of otherwise hopeless situations. And that’s a pretty amazing opportunity for any of us.”
Matt Hudson
By Rick Mauch
The Community News

It all started when Catherine Hudson was out for a walk one day near their home in Annetta. She met Cletus, a Tennessee Walker horse whose owner did not want him any more.

Cletus, now 8 years old, has been with Catherine and her husband, Matt, for two years now. They care for him daily as they hope he, and most of the other horses they have at Layla Ranch Horse Rescue, can find a forever home.

“Cletus was my first rescue,” said Catherine, who runs Layla Ranch, “I saw him and we created a bond. He’s the one who started the passion.

“We got our next one, started rescuing, and realized we needed a bigger place.”

So they bought some nearby property, 11 acres, in fact, and Layla Rose Ranch Horse Rescue was born. Now, the 501(c)3 nonprofit is home to at least 10 horses that simply wanted to be loved, but often were mistreated or forgotten.

“Nothing was here but trees. We built everything around rescuing — and Cletus. But don’t tell him that,” Catherine said with a chuckle.

Ironically, neither Catherine or Matt grew up around horses. She’s from Fort Worth and he’s from Indiana. However, driven by their desire to rescue equine they learned a lot about them in a hurry.

“It was a late passion. It started with Mr. Cletus,” Catherine said. “They were just done with him. I said I’ll take him.

“Most people just surrender horses, say they can’t afford to take care of them. A lot of times we go to kill lots. We have four right now from kill lots.”

As Catherine was saying this, she pointed to a pair of Mustangs that came to the ranch on July 4 from kill lots. They were very thin and in need of nourishment, which, of course, they are now getting.

“They said they were feeding them, but they had other horses that were in better shape,” Catherine said, noting that often they have to take whatever stories come with the horse with a grain of salt.

Sandy Roberts (left), Catherine Hudson (right), and Hudson's daughter Alexa surround Shelby, a horse with a disease that will eventually cause her …

Most of the horses who come to Layla Rose Ranch arrive with a mistrust of people. Such was the case with Buddy, a 16-year-old quarterhorse missing one eye — also obtained from a kill pen.

“If you’ve ever seen one of those kill pens, it’s packed with sick horses, abused horses,” Catherine said. “A lot of times if you look into their eyes they’ve given up. He’d given up.

“He loves kids. He’s such a kind horse. It’s amazing watching them change so much when they come in. He was scared to death of men, which tells us it was a man who abused him. Matt spent a whole lot of time with him and now he’s the nicest horse.”

“I think it’s cool that my mom started a rescue. I just love being around the horses and helping feed and take care of them,” she said.

The youngest horse at Layla Rose Ranch is Lola, nine months old. She came to them malnourished. The oldest is Kinsley, a 25-year-old rescued from, you guessed it, a kill pen.

Of Kinsley, Catherine said, “She’s not rideable anymore. So we’re looking at a forever (companion) or a pasture pet.”

A forever companion is an animal to belong to an elderly person, the two growing old together.

Another horse, a paint named Angel, roams around the preparation pasture. It’s a place where new horses are kept until they can be cleared by a veterinarian to join the others.

“Angel was completely wild when we found her in a kill pen. She was pregnant and her baby died 11 days after it was born with pneumonia,” Catherine said. “We tried everything we could.”

Not all horses that come to Layla Rose Ranch can be relocated to homes. For example, Shelby, a 9-year-old Rocky Mountain, is a forever resident. She has a disease through which, over time, her ligaments will completely give out.

Layla is a 2-year-old after which the ranch is named. She is Shelby’s baby.

Layla Rose Ranch is 100% operated by volunteers. Every bit of any proceeds raised goes toward the care of the horses.

“There is no paid position,” Catherine stressed.

Matt is the Chief Experience Officer at Work Wear Safety, based in Fort Worth.

“Finding your passion, no matter what stage in life, truly changes who you are and what your were created to be,” he said of Catherine. “She brings light into the lives of otherwise hopeless situations. And that’s a pretty amazing opportunity for any of us.”

Catherine said she has a half dozen volunteers helping out. One of those is Pete Zachrison, who, like Catherine, came from the city but fell in love with horses.

“I’d never done anything like this before,” he said. I’m a city boy. I moved here from Las Vegas, but I rode a couple horses on trails and now I just love it.”

If you’d like to be a volunteer, you can sign up on their website, https://laylaroseranch.org/. There’s also a place to donate supplies from their Amazon wish list, and good ol’ fashioned monetary donations can also be made on there.

Also, if you are interested in adopting, you can register to do that on the website as well. As one might expect, the application process is very thorough.

Catherine noted that Annetta Mayor Sandy Roberts was impressed with the ranch and even spoke at an event there recently. In fact, Catherine said the mayor asked her to speak at an upcoming city council meeting.

“On behalf of the town of Annetta we are honored to have Layla horse rescue as part of our community,” Roberts said. “We are a rural town that takes care of not just our two-legged citizens but our four-legged friends too.”

Catherine admits she gets close to the horses. When you’re saving an animal’s life, you’re a very caring person to begin with.

Also, being with him is simply some of her favorite time.

“They’re very peaceful, very therapeutic. I just love hanging out with them,” she said. “The three we adopted out, I cried. You spend so much time with them.”