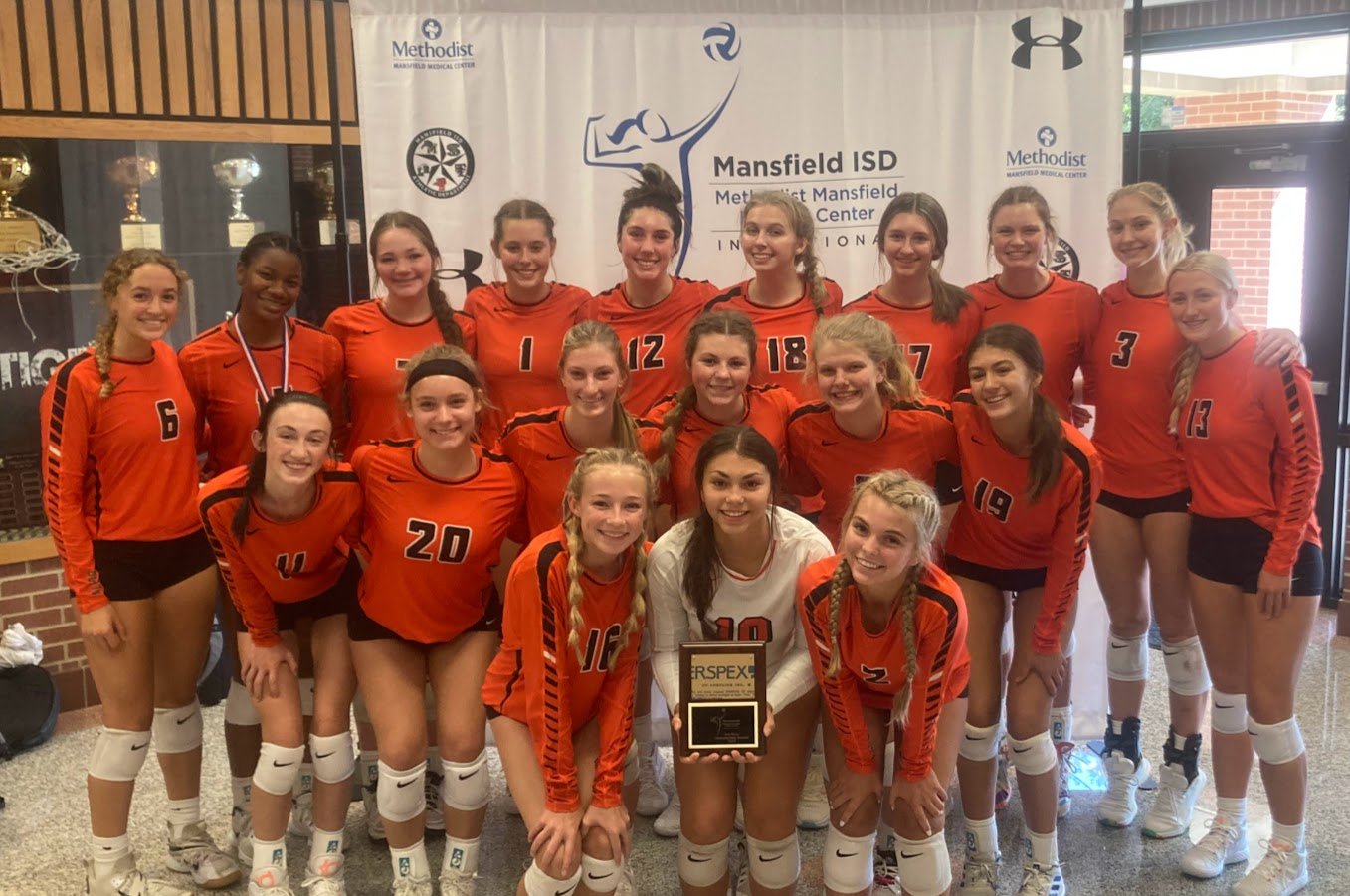 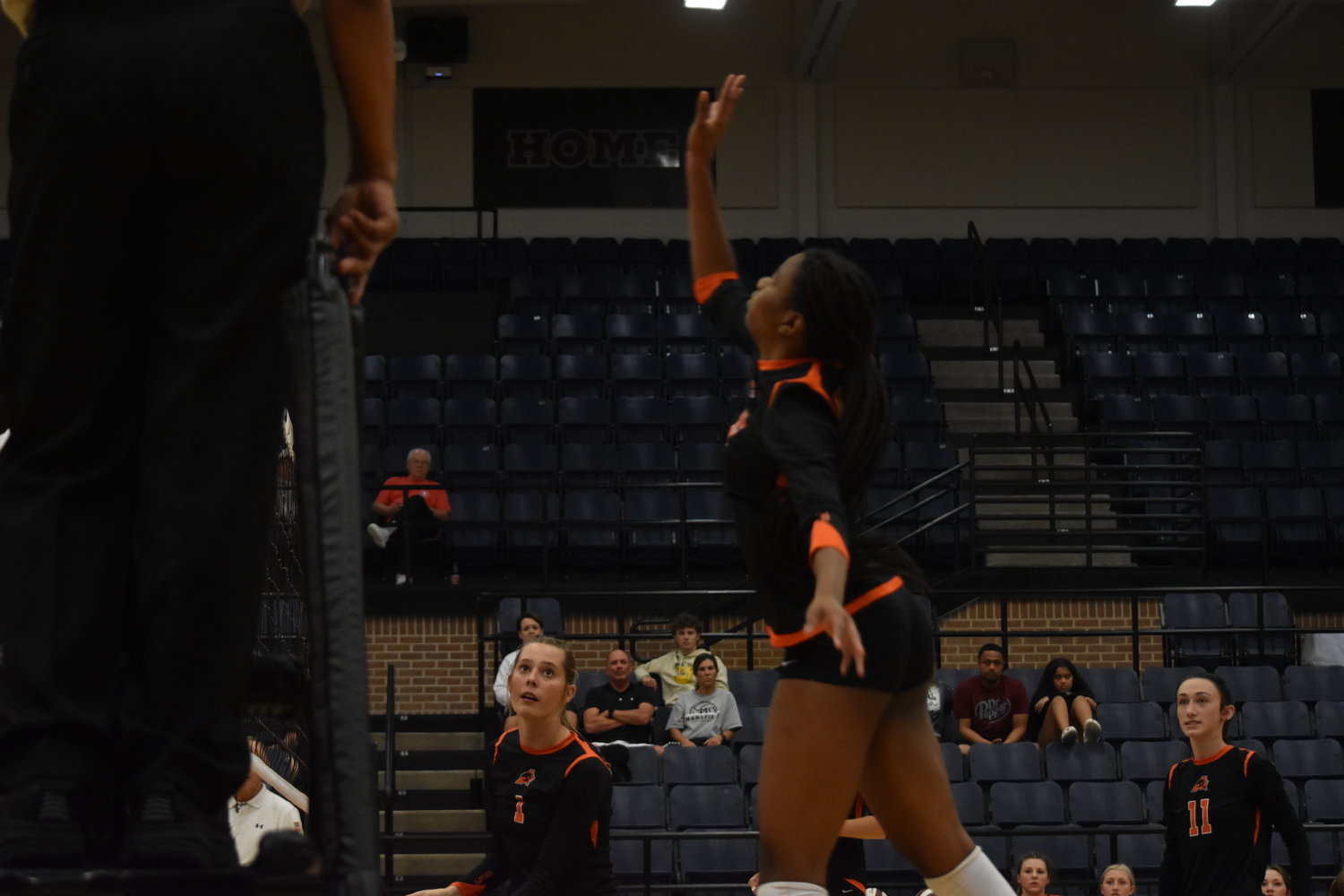 Lauryn Mack, makes a play on the ball in day two
Nolan Ruth / The Community News 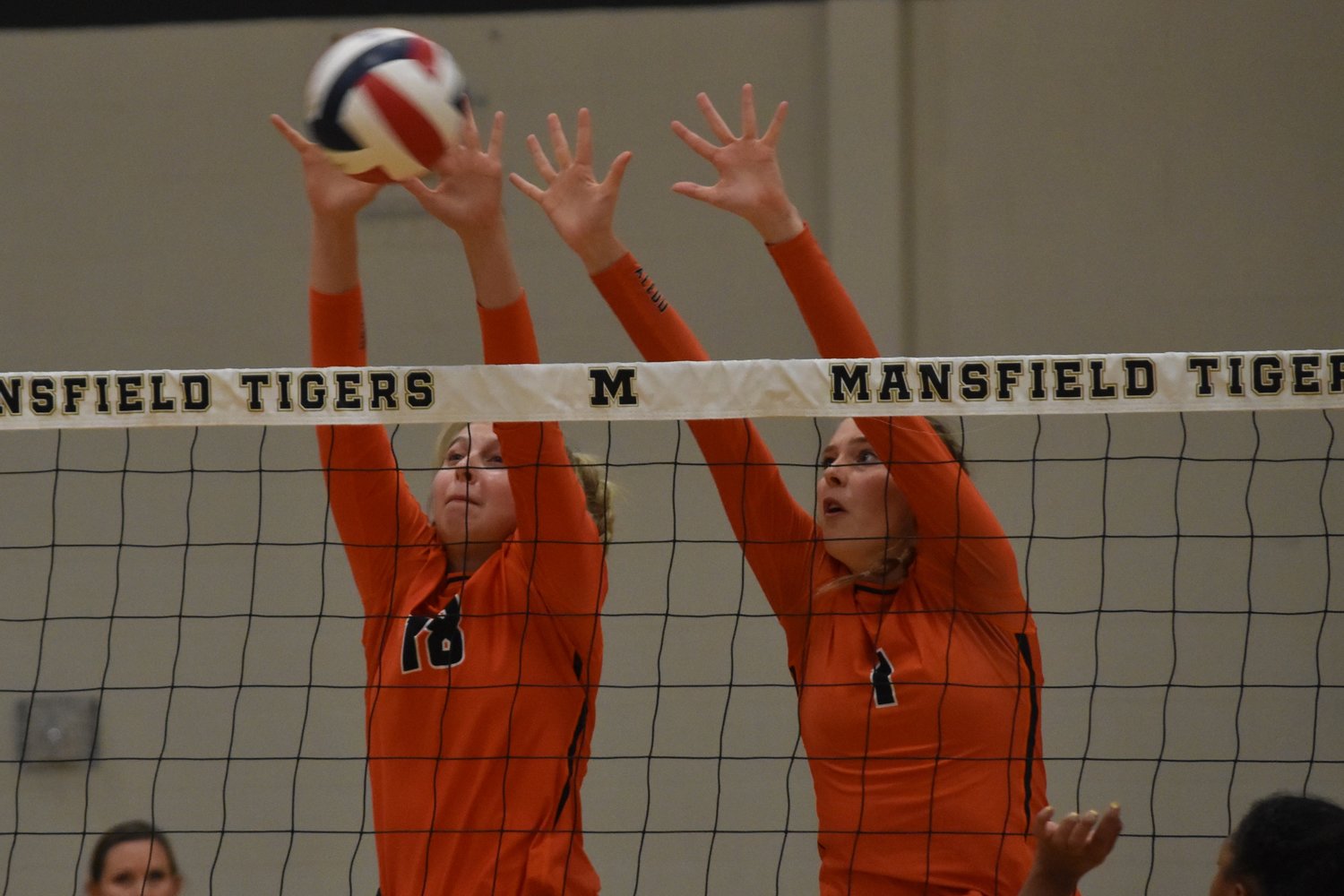 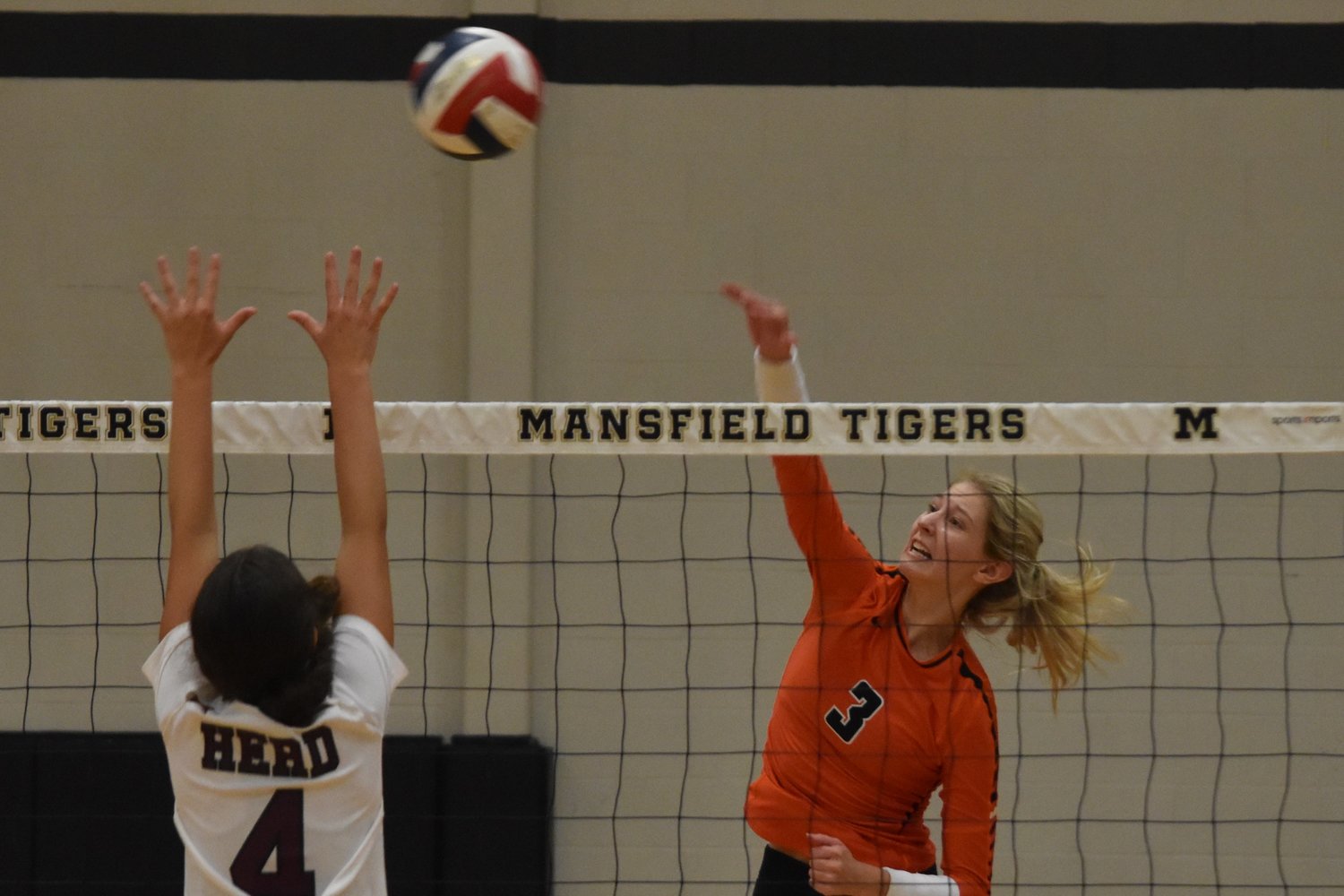 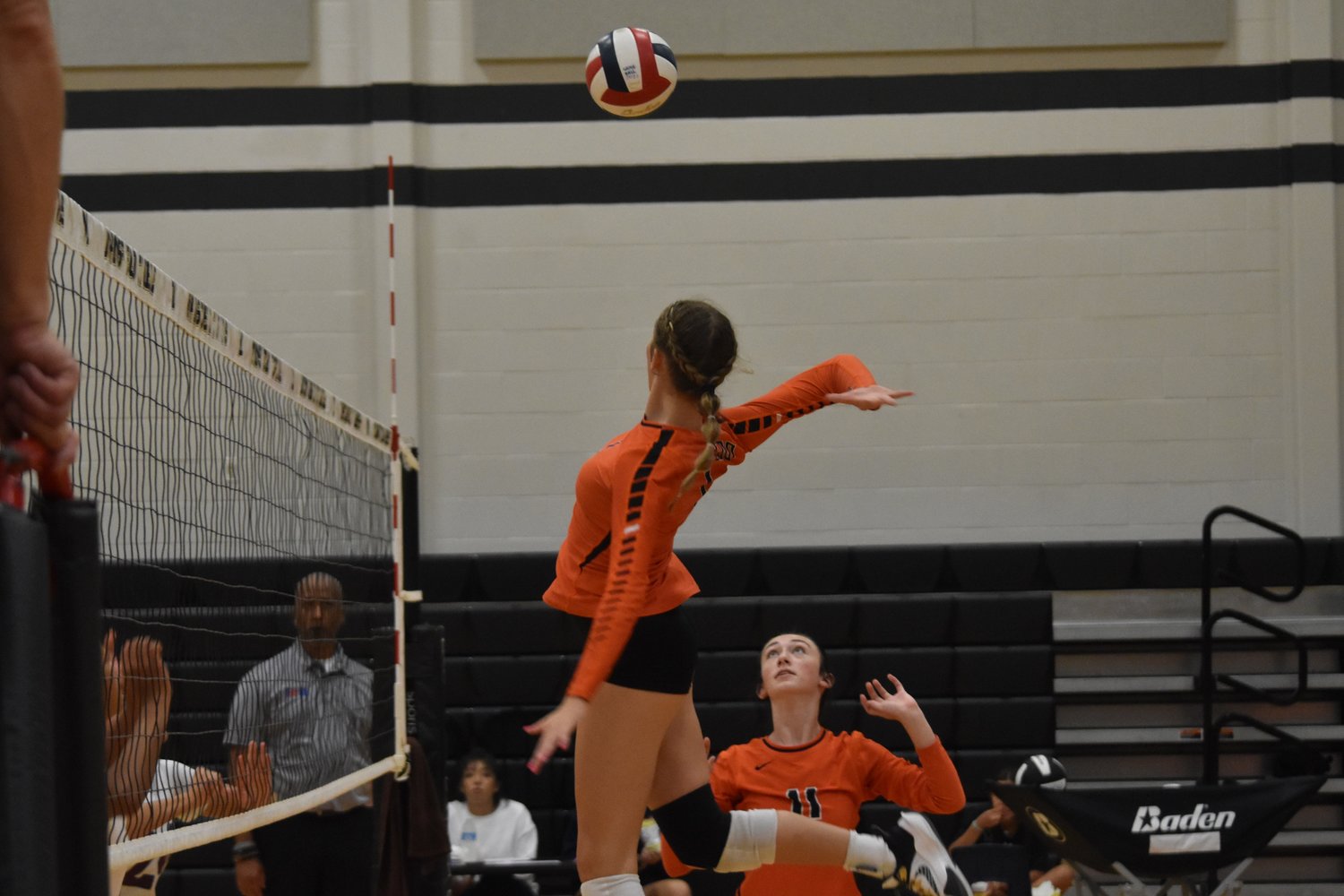 After dropping their first match of the season against Keller, the Aledo Ladycats volleyball team traveled to Mansfield for their first tournament of the campaign. It was a successful weekend for Aledo (9-2) as the team won six in a row in the first two days, before finishing third in the final day.

The Ladycats built on their 8-1 weekend just days later when the team traveled to Fossil Ridge High School in Keller and defeated the Lady Panthers 3-1 after a hard-fought match.

Aledo’s next competition will be at the Northwest ISD Tournament starting on Thursday, Aug. 18, and concluding on Saturday, Aug. 20.

The Ladycats opened their tournament at Lake Ridge High School on Thursday, Aug. 11 and got off to a rough start as they dropped their first set to Keller Central 25-15. However they stormed right back taking the final two sets 25-13 and 25-22.

In the second match against home team Lake Ridge, Aledo left no doubt as they swept the Eagles in straight sets, followed by a sweep of Dumas to put the Ladycats in excellent position after the first day.

Day two took place on Friday, Aug. 12 at Timberview High School where Aledo continued its run. The Ladycats swept Arlington High by winning both sets by a score of 25-20. The second game of the day saw a close match with Mansfield High, but Aledo again came away with a sweep.

A win in the final match of day two against Waco Midway would secure a spot in the championship bracket for the Ladycats. Midway got out to a quick start and had Aledo trailing early, but the Ladycats made a good run to bring things back even. The two teams matched each other point for point until it was tied at 24. Aledo was able to use its momentum to get two more points to take a 26-24 set win.

The second set went more favorably for the Ladycats as they were able to break away from Midway a little more than the first set, winning 25-22 and securing a spot in the championship bracket with a 6-0 tournament record.

“We’ve battled,” Gay said after day two. “It’s good to see. We came from behind when down a set that was not pretty, so for them to come back and prove themselves the rest of the time, it was good.”

Riding a six-game winning streak, and a twelve set winning streak, Aledo went into the championship bracket on Saturday, Aug. 13 against Midlothian. This time, things did not go the way of the Ladycats. Midlothian took the first set 25-14, and despite a strong push from Aledo in the second set, the Panthers completed the sweep with a 25-23 win. The loss put the Ladycats in the bottom part of the bracket, meaning the best they could finish was third.

Aledo was tasked with bouncing back against Plano East to keep their medal hopes alive. The Ladycats took the court with an eagle eye look of determination and swept Plano East to put them in the bronze medal match.

The only thing standing in Aledo’s way of a top three spot was Hereford. The fourth ranked team in 4A made the trip from the panhandle and was undefeated before also getting beaten by Midlothian.

The two teams were dead even to start the contest before the Ladycats started to pull away midway through. Aledo took set one 25-17. In the second set, Hereford came out with more ferocity and at one point led by four. However, the Ladycats found their footing and went on a run that saw them reclaim the lead and win the set 25-19.

After being presented with a third-place plaque, sophomore Lauryn Mack was given a medal for being named to the All-Tournament team.

“It was my first tournament with Aledo,” Mack said after receiving the honor. “It feels great, I’m really excited and it’s great to have a good start to the season. I’m happy to see where it goes in the future and I think it can turn into something amazing.”

Three days later, at Fossil Ridge, the Ladycats came out of the gates firing. The Ladycats got out to a 12-4 lead in the first set before the Lady Panthers took a timeout to regroup. Senior Maddie Frank made a difference early, recording multiple kills to give Aledo the lead.

The Ladycats took the first set with ease, 25-16. Fossil Ridge made a strong push in the second set, and the two were tied at eight early on. Aledo won the second set 25-18 and stood 25 points away from sweeping the Lady Panthers.

However, Fossil Ridge had no intention of going quietly. The Ladycats held a 14-10 lead when Fossil Ridge called a timeout in the third set, and immediately the Lady Panthers came storming back to take an 18-16 lead. Fossil Ridge ultimately took the set 25-21 to force a fourth set.

“I told them that we had to contain the amount of swings that they got,” Gay recalled. “We had to do a better job of serving tougher and a better job of hitting the ball to space and not just directly to their better defenders.”

It appeared Fossil Ridge had found its groove and found itself leading the Ladycats 17-10 in the fourth set. Gay took a timeout to regroup her team and Aledo started to push back, working the score to 18-16. Then four consecutive Alyssa Gonzales aces gave the Ladycats a 20-18 lead.

Minutes later, Aledo finished off the set 25-22 to take the match 3-1, extending their win streak to three and improving to a 9-2 record.