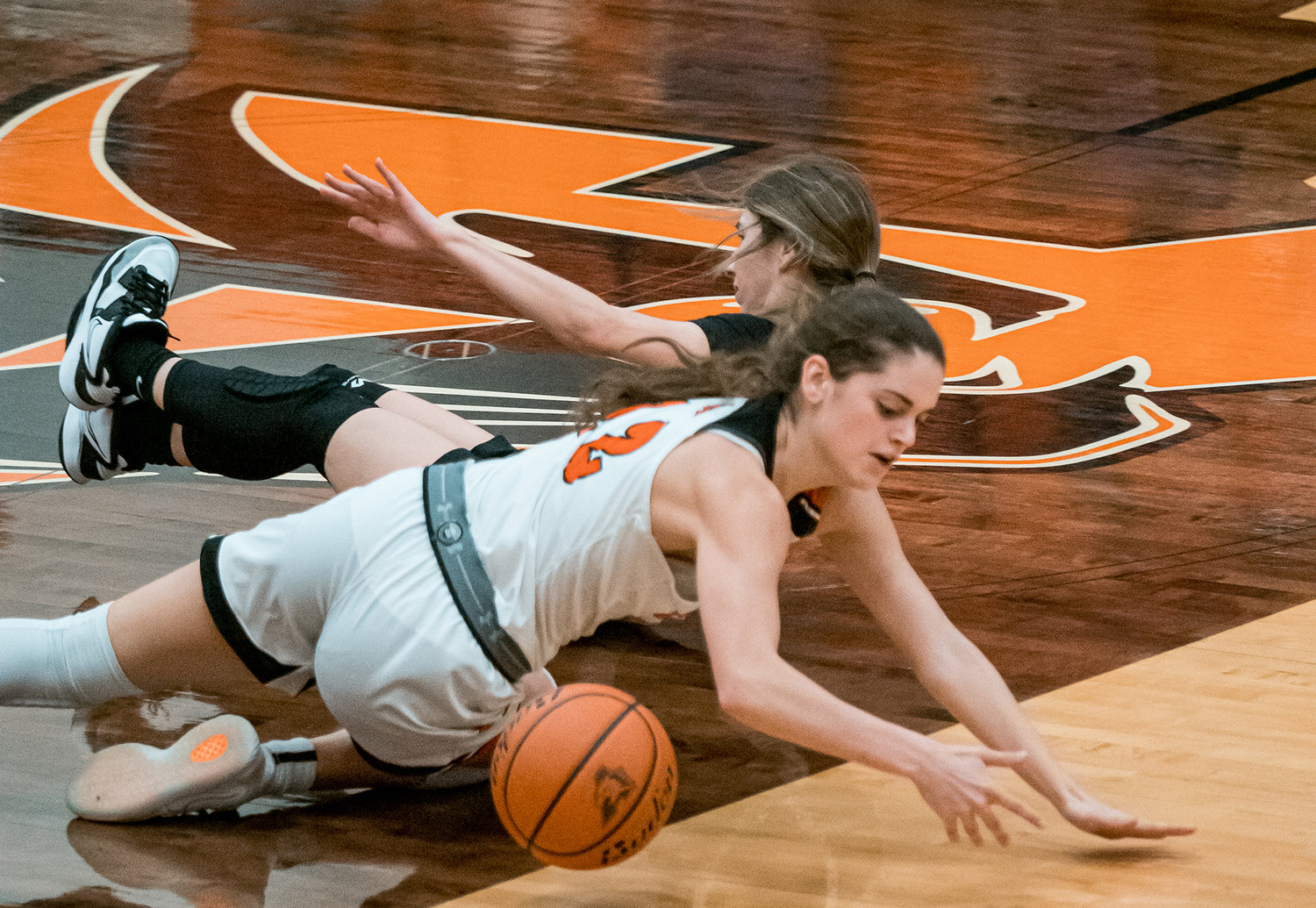 Reagan Davis scrambles for a loose ball after causing a turnover during the girls varsity game on Tuesday, Jan. 17.
Ryan Wade/The Community News 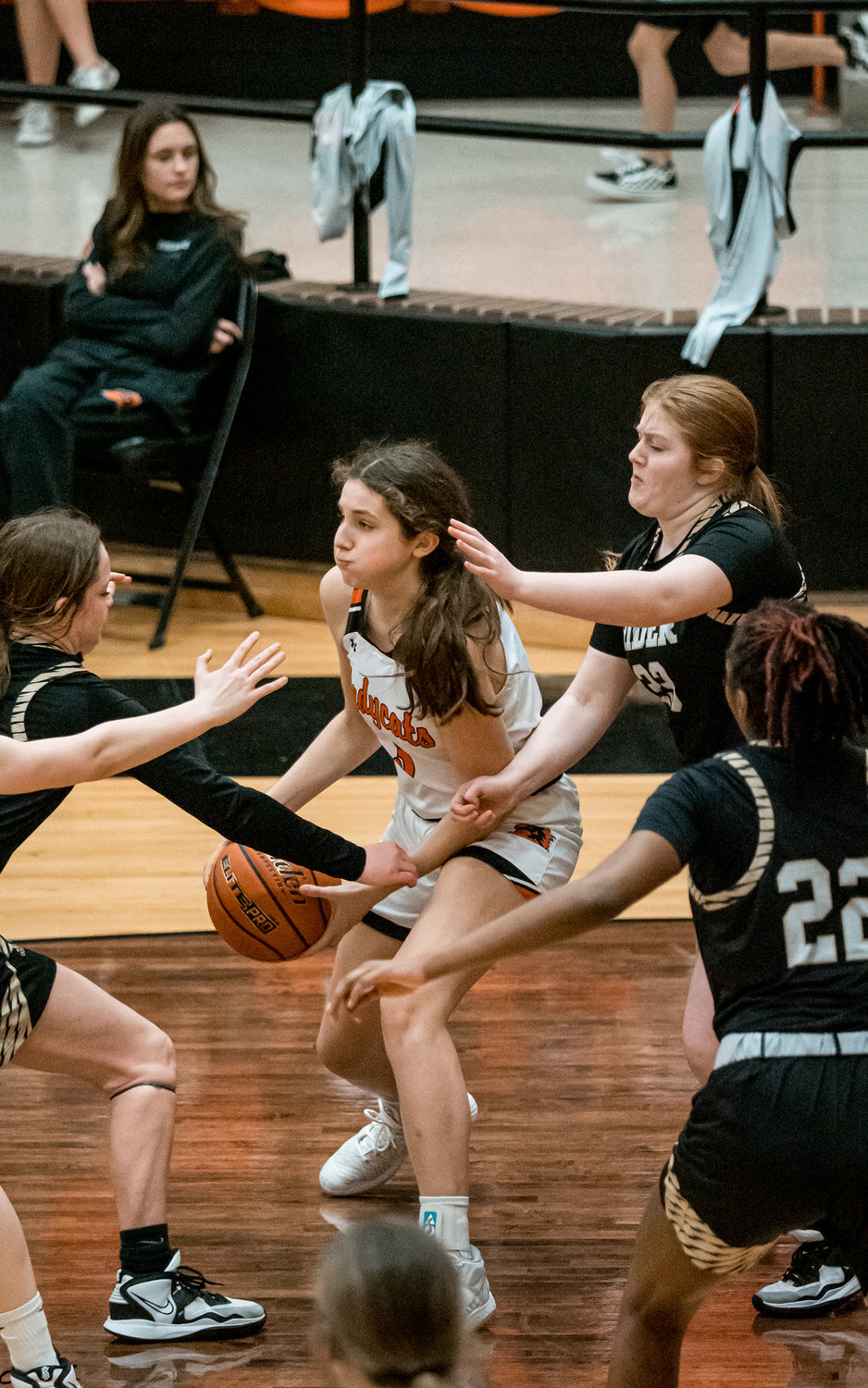 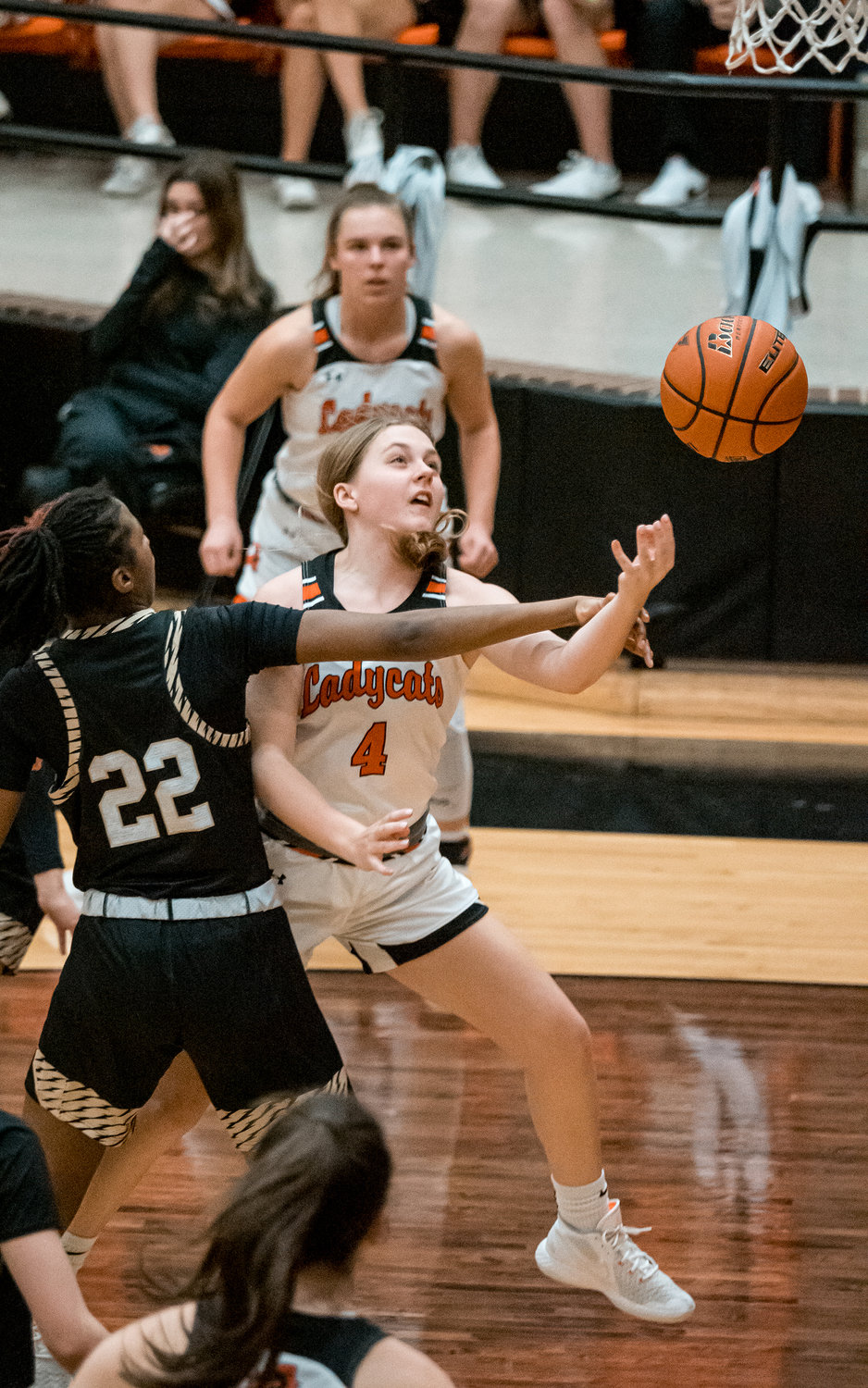 Aledo’s Ladycats earned some redemption and got themselves back in the win column on Tuesday, Jan. 17, with a blowout 56-32 victory over Wichita Falls Rider. The win comes on the heels of a 45-44 loss to visiting Granbury on Friday, Jan. 13.

The Ladycats, 13-14 overall and 3-4 in district play, find themselves currently sitting in sixth place in District 5-5A action.

Tuesday’s contest was never in doubt as the Ladycats jumped out to an early lead over the Lady Raiders and never looked back.

“We’ve done a really good job of preparing,” said Aledo head coach Nikki Hyles. “This was probably our best first quarter that we’ve had in a long time. We really got after it with some confidence. We rotated well so that we could get some opportunities for steals. It was good to see in the first quarter.”

The Ladycats came out in the opening minutes of action poised to pounce on the Lady Raiders on both ends of the floor. Offensively, Aledo dropped 24 points in the first quarter while simultaneously the defense held Rider to just a handful of points at the other end.

In the second quarter the Ladycats set the cruise control, only scoring seven points through eight minutes of play. However, the defense held its own during the stretch as Aledo took a 31-10 advantage into the break.

When halftime ended Aledo got back to work. Kandle Boggus kicked off the scoring for the home team when she came up with a steal leading to a fast-break scoring opportunity. Boggus converted the old-fashioned three-point play, sinking a contested layup on the breakaway before draining the free throw following the foul. With 6:34 left in the third quarter Aledo held a commanding 24-point lead.

The third stanza was the only time in the contest the Lady Raiders managed to put up double-digits offensively. Rider outscored the Ladycats 15-10 during the eight minutes of action, but Aledo still held a decisive 41-25 advantage heading into the final frame.

With just eight minutes remaining the Ladycats finished strong as Kenzie Grau scored all four of her points in the final frame to lead Aledo’s 15-point run. Utilizing excellent ball movement, Aledo managed to get Grau a wide-open look at the basket from the top of the key. She rewarded the execution by utilizing pin-point accuracy as she sank the long-range shot midway through the fourth quarter to put Aledo up by 20 points.

Seconds later while driving to the hole, Grau drew a foul as she attempted a short-range layup. She went 1-of-2 from the free throw line on the possession, helping her team coast to a big victory at home.

Aledo continues District 5-5A action on Friday, Jan. 20 when they travel to Justin in a battle with Northwest.

“[Northwest] is ranked second right now, but we led that game for three of the four quarters when we played them the first time here,” said Hyles, looking ahead to the matchup with the Lady Texans. “We’re going into [this game] with some confidence. We know when we’re playing well, we can play with them.”

With the game coming down to the wire trailing by three, Aledo called their final timeout of the contest to draw up a plan in an attempt to tie the game and force free basketball in overtime.

Trailing 45-42 with 10 seconds left in the game, the Ladycats scrambled down the floor before throwing up a desperation three. The shot missed the mark as it clanged off the iron. Claire Byars came up with the rebound by the high block as time dwindled down. In a last-ditch effort to draw a foul, Byars dribbled once around a Lady Pirate defender before putting her shot in off the backboard. Unfortunately, Granbury’s players remained disciplined by refusing to take the bait and fouling Aledo’s starting center.

The two teams battled throughout the contest as the lead changed back-and-forth the entire contest with neither squad able to establish a comfortable lead. The Ladycats took a 10-9 advantage at the end of the first quarter. Just as the first half was about to come to a close Granbury held a 10-point lead with just over a minute left in the second quarter. Aledo rallied in the final minute of action to post the final seven points of the half and enter the break trailing by just three, 26-23.

As the second half got underway the Ladycats managed to cinch the game up at 32-32 in the third quarter, leading to a dramatic finish down the stretch.