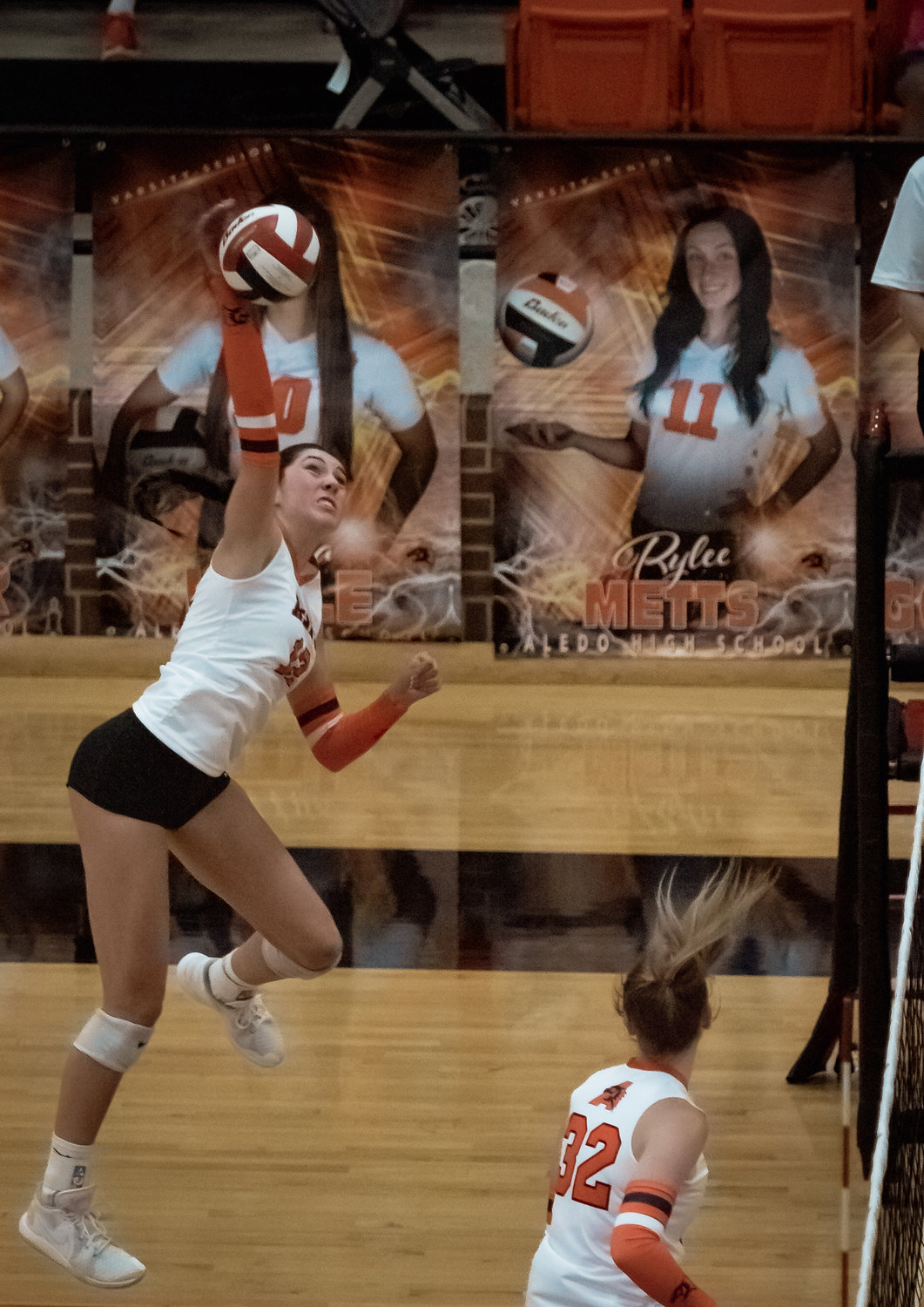 Aledo High School’s Ladycat volleyball netters kept their hot hand going with a pair of wins. Last Friday the Ladycats sent Granbury’s Lady Pirates off the plank in three straight sets. They followed up that performance with a four-set route on the road over Rider’s hosting Lady Raiders on Tuesday.

The Ladycats have now won six matches in a row, improving their overall record to 25-14 on the season (6-1 in 5A Region I District 5). On Friday they host the last team to hand them a loss as they look to avenge the only blemish on their district record when the Northwest Lady Texans come to town.

Aledo’s contest with the visiting Lady Pirates last Friday was reminiscent of a great heavyweight brawl in the first set as the two combatants were both dealt heavy blows before returning fire. The Ladycats opened the set with an early score. Granbury responded quickly ripping off several points of their own to put Aledo down by a small deficit early.

Then the battle started.

Back-and-forth the two teams went with neither willing to cede an advantage to the other. The set was so contentious, when the Ladycats rallied to go up by a 20-18 score, Granbury quickly called the first timeout of the match in an attempt to halt Aledo’s momentum.

The Lady Pirates mustered a rally of their own forcing Ladycats Head Coach Claire Gay to use her first timeout as her squad fell behind 23-21.

Aledo answered the bell coming out of the break with a 4-1 run of their own. With the Ladycats one score away from winning the first set as the score stood at 25-24, Granbury took their second timeout hoping to retake the momentum in the match.

Two quick scores later the Lady Pirates retook the lead as they were just one point away from taking the first set away from the hosting Ladycats. Gay called her second timeout in an effort to give Aledo an opportunity get back on top and make a run to close out the set.

That’s exactly what happened. The two teams battled for supremacy all the way to the bitter end of the first set before the Ladycats pulled out the victory, 30-28, in front of the hometown crowd.

The Ladycats used that first win as they rallied past the visiting Lady Pirates. Aledo took the next two sets with relative ease as they topped Granbury 25-18 and 25-20 to take the match.

Senior outside hitter Alyssa Gonzales led the way for the Ladycats on the night as she combined for 15 digs, 10 kills, and one ace. Sophomore outside hitter Lauryn Mack had a good night as well, as she compiled 13 kills, five digs, and an ace of her own. Vivian Parker, junior outside hitter, led Aledo in aces on the evening with a pair to her credit while also amassing nine kills. Senior libero Mia Little led the Ladycats defense with 20 digs. Seniors Maddie Frank and Payton Himler tended the net effectively as they both finished the night with two blocks, respectively.

Ladycats best hosting Rider on the road in four sets

Endurance has been a hallmark of the last two wins Aledo’s netters have accumulated. Last Friday after a grueling first set the Ladycats appeared to be the fresher of the two teams, and it showed on the scoreboard when they defeated Granbury.

Tuesday’s road win at Rider proved to be much the same. The Lady Raiders stole the first set from Aledo 28-26. Rider’s lady netters took the early advantage, but at a great cost. Running on fumes the remainder of the match, they became easy prey for the Ladycats the rest of the way as Aledo rallied the next three sets to take the match by scores of 25-9, 25-14, and 25-15.

Mack led the charge for the Ladycats in the match with 17 kills, 14 digs, and a pair of aces. Parker compiled 22 digs and 14 kills on the night. Frank tacked on 14 kills of her own while also coming up with a block at the net. Junior setter, Rylee Metts had one of her strongest performances to date with a whopping 37 assists and 13 digs to her credit. Sophomore setter, Ava Reding posted 20 assists of her own. Gonzales had her serve dialed in as she ended the night with five aces in the match.