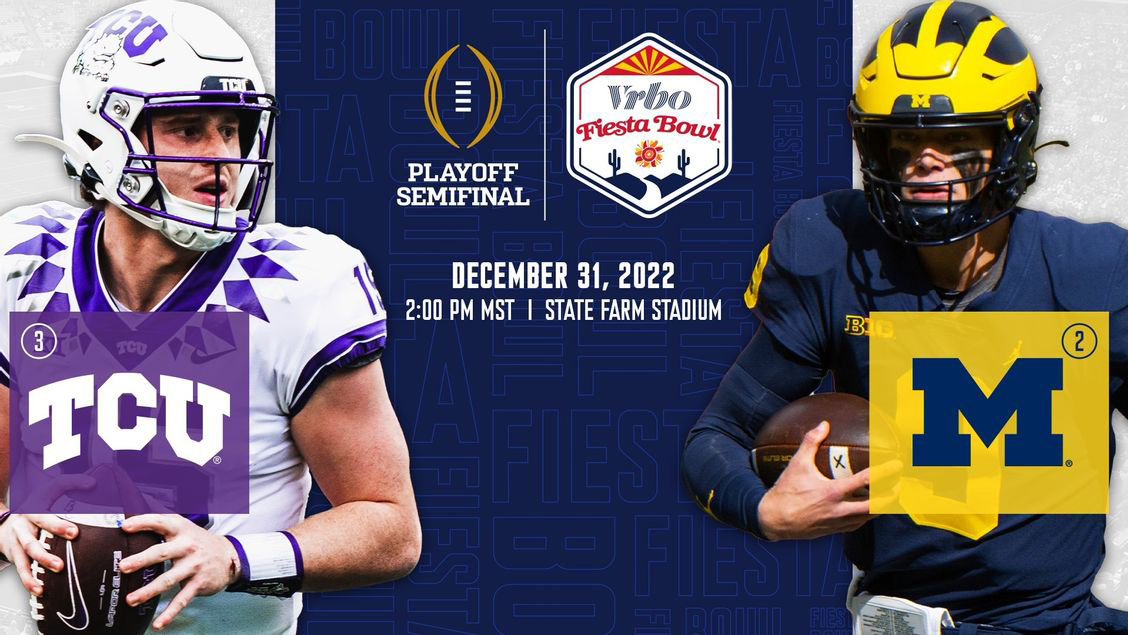 Three former Aledo Bearcats who know a lot about winning championships could be on the verge of capturing another as members of the TCU Horned Frogs football team.

The Horned Frogs (12-1), ranked No. 3 in the nation, will face No. 2 Michigan (13-0) in the Fiesta Bowl in Glendale, Arizona at 3 p.m. on Saturday in the first game of the College Football Playoffs semifinals. The other semifinal pairs defending national champion and No. 1 ranked Georgia (13-0) against No. 4 Ohio State (11-1) in the Peach Bowl in Atlanta at 7 p.m.

The semifinal winners will meet in the national championship game at SoFi Stadium in Los Angeles at 6:30 p.m. on Jan. 9. All games will be broadcast on ESPN.

The trio of seniors, Wes Harris and his brother Wyatt, along with Colt Ellison, are hoping to join Alabama running back Jase McClellan as the only former Bearcats to win both a state championship and a national title. McClellan helped the Crimson Tide win the 2020 national championship when he was a freshman.

Aledo Athletic Director Steve Wood, who coached each of them to state championships during his five years as head coach of the Bearcats, said there was a sense of something special even before the season began. It came up during a round of golf with Wyatt and Colt.

"There was a breath of fresh air, they were excited and ready," Wood recalled. "Of course, nobody saw this coming, but here they are and they are very deserving."

Sonny Dykes' first season as head coach of the Horned Frogs has, without question, been unforgettable. It would also be a most memorable end to each of their college football careers.

Wes Harris has started all 13 games this season on the offensive line, helping anchor an offense that averages more than 475 yards and 40.3 points per game. He also blocks for the Heisman Trophy runner-up, quarterback Max Duggen.

Wyatt Harris, a middle linebacker, has played in six games this season. Ellison, a defensive end, has seen action in four.

Wood was Aledo’s head coach in both state title seasons for Wyatt Harris and Ellison in 2016 and 2018, going a combined 32-0 in those seasons. They were also state runners-up in 2017.

Buchanan said he sent the trio a text congratulating them on being a part of history as members of the first team from Texas to qualify for the College Football Playoffs. He added that he told them, "Now go and win the darn thing."

"It doesn't surprise me they're in this position. I'm happy for them," Wood said. "They put a lot of work in, they always have.

"You want them on your side. As a coach I was glad they were wearing my colors."

Among those making the journey to Glendale, a suburb of Phoenix, is Willow Park Mayor Doyle Moss. In fact, he and his wife Linda are hoping to be on the road for some time.

The Mosses began their road trip via car on Thursday. Along with the game — hopefully games — they plan to visit family.

"We got back to Texas in 2006 and bought TCU season tickets and have had them now for years," Moss said. "We've been Frog fans, Bearcat fans, Longhorn fans (Linda attended the University of Texas). I'm so glad this is happening for TCU, they deserve it."

Moss reflected on the last time TCU was in a high profile game. It wasn't quite this caliber, but it was at that point perhaps the biggest win in Horned Frogs history as they defeated Wisconsin 21-19 in the 2011 Rose Bowl to finish No. 2 in the nation.

"We regretted not going to the Rose Bowl," he said. "We're not missing this one — or the next if they get there."

The Aledo trio aren't the only Parker County players in quest of a national championship. On the Georgia roster is redshirt freshman Cash Jones from Brock.

Jones saw action as a reserve running back and on kick return coverage units in 10 of the Bulldogs' 13 games to date. He had one carry for a 36-yard touchdown in a win over Vanderbilt.