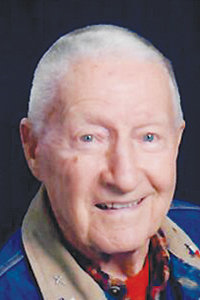 Local icon Charlie McLain died at his home of more than sixty years in Annetta on October 19, 2022.

Charles Fisher McLain was born January 7, 1930, to Robert A. McLain, Sr. and Nellie McLain. He spent his earliest years in rural Wheeling, West Virginia, before moving to Lakeland, Florida at age 14. His family moved to Florida to get away from the West Virginia winters and to flatter ground more suited to farming. Charlie remained in Florida until enlisting in the United States Air Force at Age 18.

During his eight years of service in the United States Air Force, Charlie served as a Crew Chief on the B-36 stationed out of Carswell AFB in Fort Worth, Texas. After completion of his military service, he worked at Consolidated Aircraft (which later became General Dynamics and is now Lockheed Martin) prior to opening his own business.

Charlie was a master electrician and could fix just about anything. As an electrician, he worked on many of the major projects in and around Parker County including the grain elevators in Aledo, Weatherford, Saginaw, and Fort Worth, as well as overseeing many water systems in Parker County.

Charlie also worked for many years building and repairing 200-plus fire trucks in his shop on Old Annetta Road for most of the fire departments in Parker and surrounding counties.

Charlie moved to East Parker County in 1959, and married Elizabeth “Betsy” McLain on Valentine’s Day, 1971. The two had known each other as teens in Florida, but the courtship didn’t start until much later over long phone calls and by mail, and Charlie proposed by mailing her an engagement ring in a shotgun-shell box. The two remained in Annetta for the rest of their lives.

Charlie was instrumental in the incorporation of the Annettas in 1979, and was proud of these successful endeavors to keep the East Parker County area from becoming western Fort Worth. Charlie led these efforts, getting the paperwork filed with the State of Texas just days before Fort Worth applied to annex this Parker County area.

Charlie truly lived as the hands and feet of Christ, and lived a life of service.

He faithfully served as a member of the Aledo Lions Club, helping to raise thousands of dollars in support of their efforts. Charlie also ran the chains at the Aledo High School football games for many years. With smiles on their faces, friends laugh that there’s no telling how many first downs that might have been a hair short were given to the Bearcats because Charlie was on the chains!

Charlie enjoyed hosting barn dances at their place for the teens in the area, and he still referred to them as “my kids” even though some of those “kids” are now in their 60s. Charlie never met a stranger and thrived on being around his community friends, telling stories and reminiscing about his life, his travels while in the USAF, his childhood misadventures, and teenage mischief. Charlie always had a twinkle in his eye and a wry grin with tales ready to tell for anyone who would listen.

Charlie was an active member of Aledo United Methodist Church serving and using his gifts in every imaginable way. Charlie taught Sunday school, sang in the choir, and was so essential for the administrative board and trustees of the church that he was made a lifetime member of those committees. He was also a lifetime member of the Lord’s Acre committee, providing and overseeing the setting up of the main tent every year. He was always passionately connected to the Missions Committee because of his work with the youth missions every summer, and the Aldersgate mission in Brownwood. Charlie helped with Children’s ministries on Wednesday nights throughout his life, and always particularly enjoyed helping children grow in their faith.

Charlie was preceded in death by his parents, his wife Betsy McLain, his brother Packy McLain, and his sister Sallie Laney. He is survived by his sister, Emily Drake, his sister-in-law Carolyn McLain, numerous nieces, nephews, great nieces, and great nephews, and his community of friends whom he claimed as family.

A memorial service will be held at 10 a.m. on Saturday, November 12, at Aledo United Methodist Church. Following the service, there will be a casual meal with time for fellowship, which was Charlie’s wish.

In lieu of flowers, his friends ask that you honor Charlie’s life of service by spending some of your time in service to others by volunteering in the community, the church, and/or with children.

An open Shutterfly account has been set up to share photos of Charlie being Charlie over the years. You can share your memories and stories at https://charliemclain.shutterfly.com/