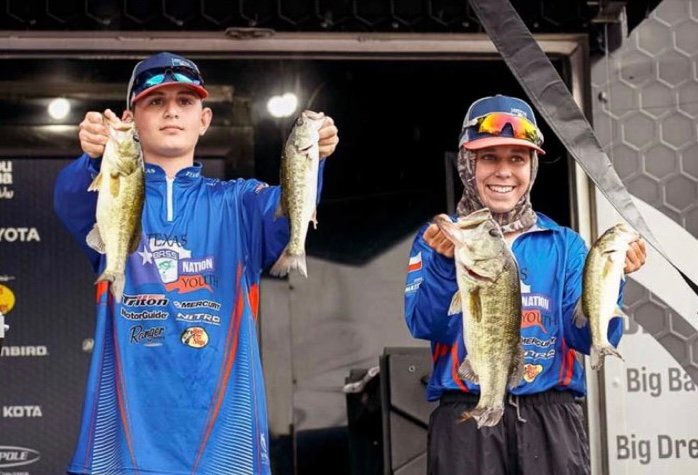 Mark Cerja, Jr. (right) and his partner Gus Richardson (left) show off their catch after winning the Bassmaster Junior National Championship.
Special to The Community News
Posted Thursday, August 4, 2022 10:22 am
By Nolan Ruth
The Community News

Mark Cerja, Jr. has not even started at Aledo High School yet but has already made a name for himself. The incoming freshman competed in the Bassmaster National Championship on July 29-30 in Huntingdon, Tennessee, and brought home the title with a two-day tally of 18 pounds, 5 ounces.

Before nationals, Cerja, Jr., along with his partner Gus Richardson from Rockwall, competed in the Lone Star Junior Bassmaster tournament at Cedar Creek Reservoir just outside of Kemp and Malakoff back in June. With Cerja, Jr.’s father as the boat captain, the pair finished second in the state of Texas with a weight of 21.95.

“There was a bunch of tough competition in Texas,” Cerja, Jr. recalled. “Actually, in Texas because there are so many teams, they take two teams to nationals as opposed to other states that only take one.”

When the team arrived in Tennessee for the tournament, they had plenty of time to get on the lake and practice.

“We knew that there was a lot of grass in this lake,” Cerja, Jr. explained. “Both two days of practice, the fish really like Texas Rigs. We couldn’t get them to bite many moving baits or reaction baits and everything really moving was getting choked out by grass.”

Everything took a turn when the competition started on Friday, July 29 and storms started rolling across the state of Tennessee, delaying the start of the tournament by an hour. However, because of their practices, they were able to find the spots they knew could produce some large catches.

“We relied heavily on the areas we found in practice,” Cerja, Sr. stated. “We relied on them on both Day One and Day Two. As a matter of fact, we didn’t catch any fish in any of the areas we didn’t practice in.”

Unfortunately, because they were one of the later boats to take off, and with 65 boats on a 1,000-acre lake, their number one area of the lake had been cornered.

“There were three boats there already,” Cerja, Sr. remembered. “However they managed to catch a nice five-bass limit there and then head over to Rocket Creek just off the lake.”

At the end of the first day, the team was in second place at 10 pounds, 7 ounces, only trailing by one pound.

Cerja, Jr. and Richardson hit the lake for Day Two in excellent position. They knew they needed to have another good showing to take first place. However, it appeared the bass were not as aggressive on Day Two.

“We went out with the same plan,” Cerja, Jr. said. “We knew those fish were there, but it was just tougher. The pressure had built on the lake, I think the fish were just in shock.”

The crew headed down one of the many creeks splintering off of the lake and almost instantly got two big catches.

“Gus immediately caught a two-and-a-half pounder,” Cerja, Jr. recalled. “For that lake it was a nice one. The very next cast I bought in a four-pounder.”

The Day Two catch weighed in at 7 pounds, 14 ounces for a two-day total of 18 pounds, 5 ounces. Cerja, Jr. and Richardson were the second team called to weigh in and they sat on the stage in the “hot seat” while every other team weighed their catches.

At the end, it came down to the team from Alabama that led after Day One. All it would take was 6 pounds, 15 ounces to take the tournament. However they weighed in at 5 pounds, 4 ounces and Cerja, Jr. and Richardson were the national champions.

“I was in shock,” Cerja, Jr. described. “I really did think they would bring in a bigger bag. When I saw 5 pounds, 4 ounces I froze and the next thing I knew my dad was picking me up.”

All three members of the team took home trophies and Cerja, Jr. and Richardson will split a $2,000 scholarship for winning the championship.

Cerja, Jr. will be a freshman at Aledo for the 2022-23 school year and looks forward to joining the Aledo Anglers Club.