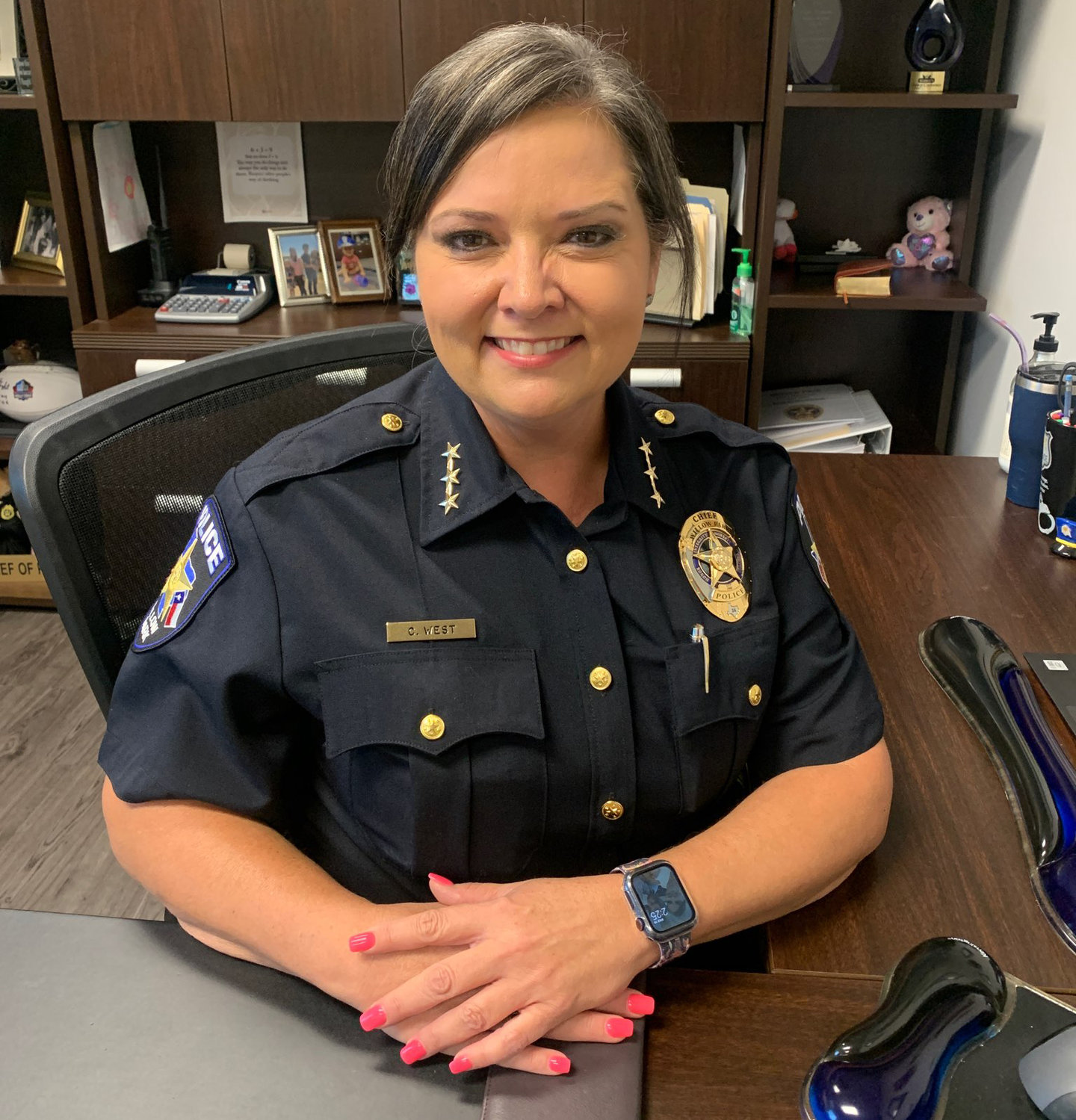 Carrie West has been the police chief in Willow Park for five years.
Courtesy City of Willow Park
Posted Friday, August 19, 2022 9:08 am
By Rick Mauch
The Community News

Born and raised in Fort Worth, a graduate of Paschal High School, and a lifelong resident of the Metroplex, she was already a success in law enforcement before making the historic decision to lead Parker County’s second-largest police force. She had served more than 21 years with the City of Corinth police department, including being named Officer of the Year and Supervisor of the Year in 2009.

She retired from the Corinth PD in July 2016. But, after working as a risk manager in the private sector, she was reminded her calling is in law enforcement, and in 2017 she came to Willow Park.

Under her leadership, the department attained the status of “Recognized Agency” with the Texas Police Chief’s Association in 2020. That same year she received the East Parker County Chamber of Commerce’s Pappy Thompson Community Service Award.

West offered her thoughts on her first five years at the helm in Willow Park, along with a few thoughts about what might lie ahead and more.

CN: How would you assess your five years in Willow Park so far? Were your initial goals met?

CW: My first five years in Willow Park have flown by! It has been a blessing to have a supportive mayor, council, city manager, management team, and a great team within the police department. It is this support that has allowed many of the initial goals to be met. These goals included both internal and external improvements.

Internal improvements include increasing officer pay and implementing a step-pay plan. While not complete, strides have been made in the right direction. Additional internal improvements included upgrading the in-car camera systems and adding body cameras. Also, improvements to the hand-held ticket writers were made, switching from a previous vendor to a vendor that integrates seamlessly with the software utilized by the municipal court. Internal improvements also include standardizing and issuing basic elements of an officer’s duty gear, including handguns, belts, and other necessary items.

Other items added include TASER’s, which previously were not utilized. Improvements were also made to the department’s policies. The department is accredited with the Texas Police Chief’s Accreditation Program. This program is the gold standard in Texas and requires a review of all of the policies in the agency as well as an on-site inspection process to ensure all requirements for accreditation are satisfied.

Lastly, as part of the re-branding, our vehicles were re-wrapped to a more traditional look. We now operate a fleet of black and white cars.

External improvements include more community engagement to invite and foster a partnership with those that live and work in Willow Park and our surrounding communities. We have successfully implemented the Citizens Police Academy (CPA), Clergy and Police Alliance (CAPA), and National Night Out (NNO). The CPA meets once a week for about 10 weeks and participants meet many of our officers and learn more about what actually happens in the Police Department. We invite citizens of Willow Park to attend as well as citizens from our surrounding communities. The CAPA program is very similar to our CPA, but our CAPA members go a step beyond and serve our officers spiritually and are available for citizens following a tragedy. Our officers have their contact information and utilize their guidance when needed. We also partner with other entities for car seat safety checks. Lastly, be on the lookout during the Holidays, as the Grinch has been known to make traffic stops rewarding good drivers!

CN: What has been the biggest challenge you’ve faced?

I would also like to add the events of 2020 and the learning opportunities that came with a worldwide pandemic. Uncertainty was felt across the globe as we navigated uncharted waters. The challenges of the pandemic were many, but managing staffing levels to ensure continuity of operations was a major challenge.

During this time, we also had “ice-mageddon.” Officers were on duty continuing to be available for the community even though some faced personal challenges with loss of power or water at their homes. We assisted at warming centers and allowed residents to charge their electronics at the Public Safety Building.

CN: What kind of growth have you seen?

CW: Our county continues to attract both businesses and residents. While estimates vary depending upon the source, the North Central Texas Council of Governments says Willow Park has experienced a 5.5% rate of residential growth in the last year. I would expect this trend to continue. There are currently multiple new residential building projects in the city to perpetuate the growth.

Additionally, the commercial areas continue to develop. The growth in Willow Park since I started in 2017 includes the completion and expansion of several retail establishments, new neighborhoods, additional restaurants, and expansions of businesses that were operational in 2017.

We have also grown our community-based programs such as the Citizens Police Academy and the Clergy and Police Alliance.

CN: What do you like most about your job?

CW: Can I say everything? It is all about the people. It is the people on our team that are the heart and soul of our agency. The relationships within the agency and the relationships built outside of the agency are the vital components of the success of the agency and are probably my favorite parts. I enjoy talking to individuals and groups about the wonderful things happening and what we see in the future for the Willow Park Police Department.

CN: You made history as the first female chief of police in Parker County. Do you feel you broke a glass ceiling for other women in that field?

CW: Every advancement that is made for inclusiveness in law enforcement is an advancement in the right direction. I am not sure the glass ceiling is broken here in Parker County, but I would sure like to think I put a big crack in it!

Leadership roles, not just chief executive positions, within police agencies lack females. As a profession, we need to do more to facilitate that inclusiveness. The Texas Police Chiefs Association (TPCA) implemented the Women’s Law Enforcement Executive Committee in 2019 to further this mission. I was appointed as chair in 2021 and have worked diligently to launch the TPCA mentoring program.

CN: What are your hobbies when you’re not working?

CW: I have recently started traveling more when I can get away. There is a lot of the continental United States that I would like to see. A recent trip into the Smokey Mountains ignited the desire to do some road-trip traveling. I still occasionally play a round of golf, but not as often.

CN: What lies ahead/what goals do you have for the future?

CW: I want to continue to serve the citizens of Willow Park and continue to build relationships within the community. I am also working towards becoming more involved with the TPCA to promote professional policing at the state level.