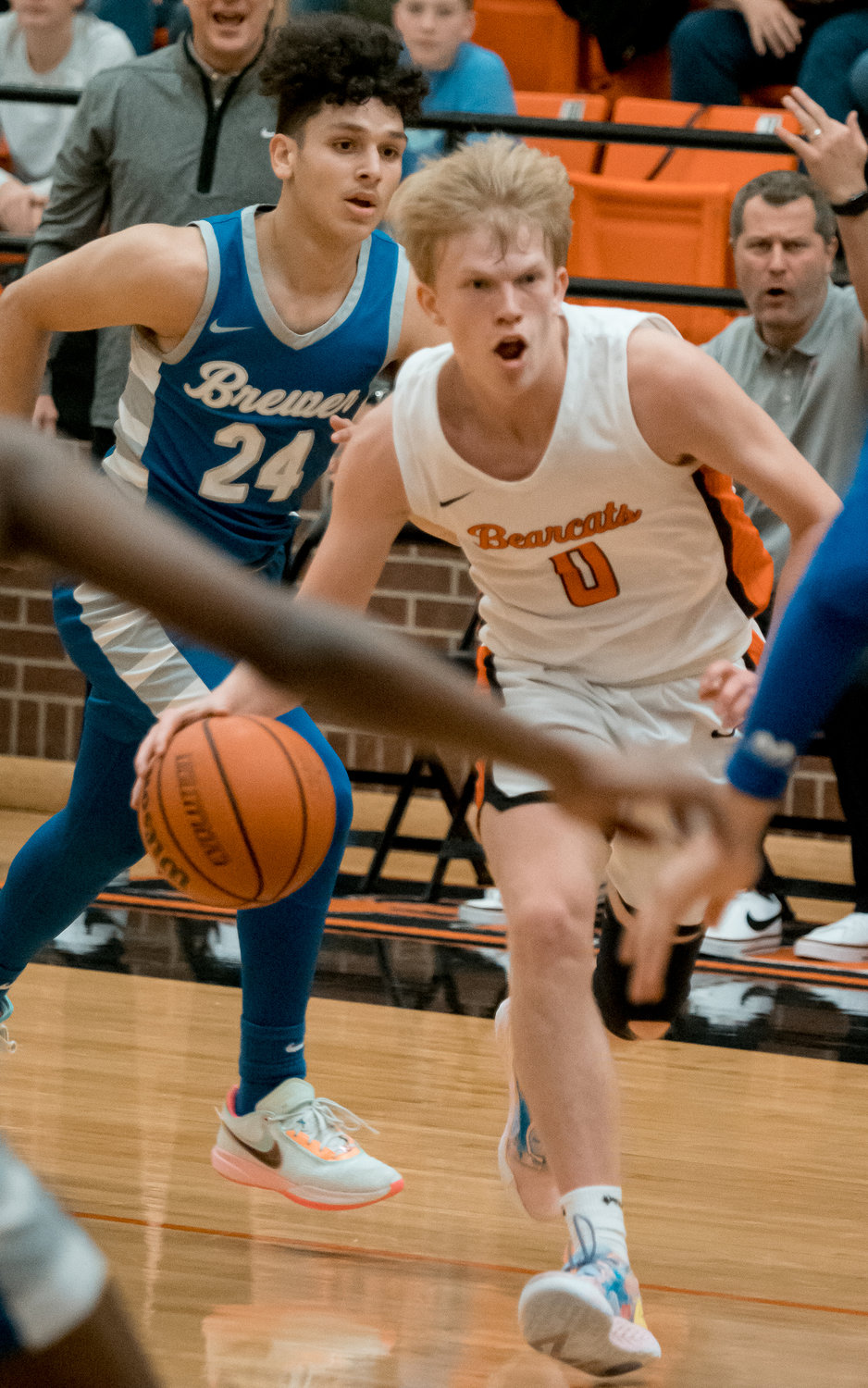 Losing is never easy, but some losses sting more than others.

That was the case on Friday, Jan. 6, when the visiting Brewer Bears managed to sink a last-second shot to steal the win from the Bearcats on their home court in a tightly contested 38-36 contest.

Following a strong defensive stand that lasted 1:11, the Bearcats regained possession with 26 seconds left in regulation before immediately calling a timeout with the score tied at 36-all. After a quick strategy meeting, play resumed with the Bearcats inbounding the ball on the far end of the floor. Aledo raced across half court to begin setting up their offense for one final attempt at closing out the game.

Point guard Ulises Garcia dribbled around the right side of the perimeter before handing it off to Exavier Anderson. Anderson returned the ball to the top of the key before passing off to Drew Clock. Clock moved to his left, dribbling the ball a pair of times before Brewer’s Julian Perez forced a turnover for the Bears.

Perez quickly found Carron Gibson with the outlet pass as Gibson raced down the floor with Aledo’s Brandon Fields in hot pursuit. Gibson threw up the left-handed layup over Fields’ outstretched arms before crashing to the hardwood below. The ball played off the glass, falling through the hoop just as time expired.

Brewer operated with great deliberation on the offensive end of the floor throughout the contest, resulting in few scoring opportunities for both clubs. Any time the Bearcats transitioned from man defense into zone, the Bears were content to melt the clock away just inside midcourt. Multiple times during the contest Brewer was able to burn more than a minute off the clock before attempting a single shot.

“That’s the way they play every game,” Robinson said of Brewer’s offensive philosophy during a post-game interview. “We knew what it would be. It’s hard to speed it up when they want to slow it down.”

Right from the get-go slowing down the pace of play was exactly what Brewer did. Aledo scored first when Clock knocked down a short-range jumper down low little more than a minute into the contest. The Bears answered back with a score of their own before going ahead 3-2 during a trip to the charity stripe. On the following possession by Brewer, Anderson forced a turnover before going coast-to-coast and finishing with a dunk to put the exclamation point on the play.

With the hometown crowd on their feet as the Bearcats reclaimed the lead at 4-3 at the  4:35 mark in the first quarter the Bears called their first timeout in an attempt to slow the game back down.

The plan worked to perfection.

Over the next 4:31 of play not another point was scored by either side until Brewer’s Javier Espino made a layup with three ticks left on the clock to put the Bears on top 5-4 at the end of the first.

Offense picked up for both squads in the second quarter, but the game remained a low-scoring affair. Heading into the break at halftime Aledo trailed 17-15.

After trailing for much of the first half the Bearcats reclaimed the lead with 4:20 left in the third quarter as Jackson Todd hit both shots from the free throw line. The 24-22 advantage wasn’t much, but it was enough to get the hometown crowd emphatically involved with a lot of basketball left to play. 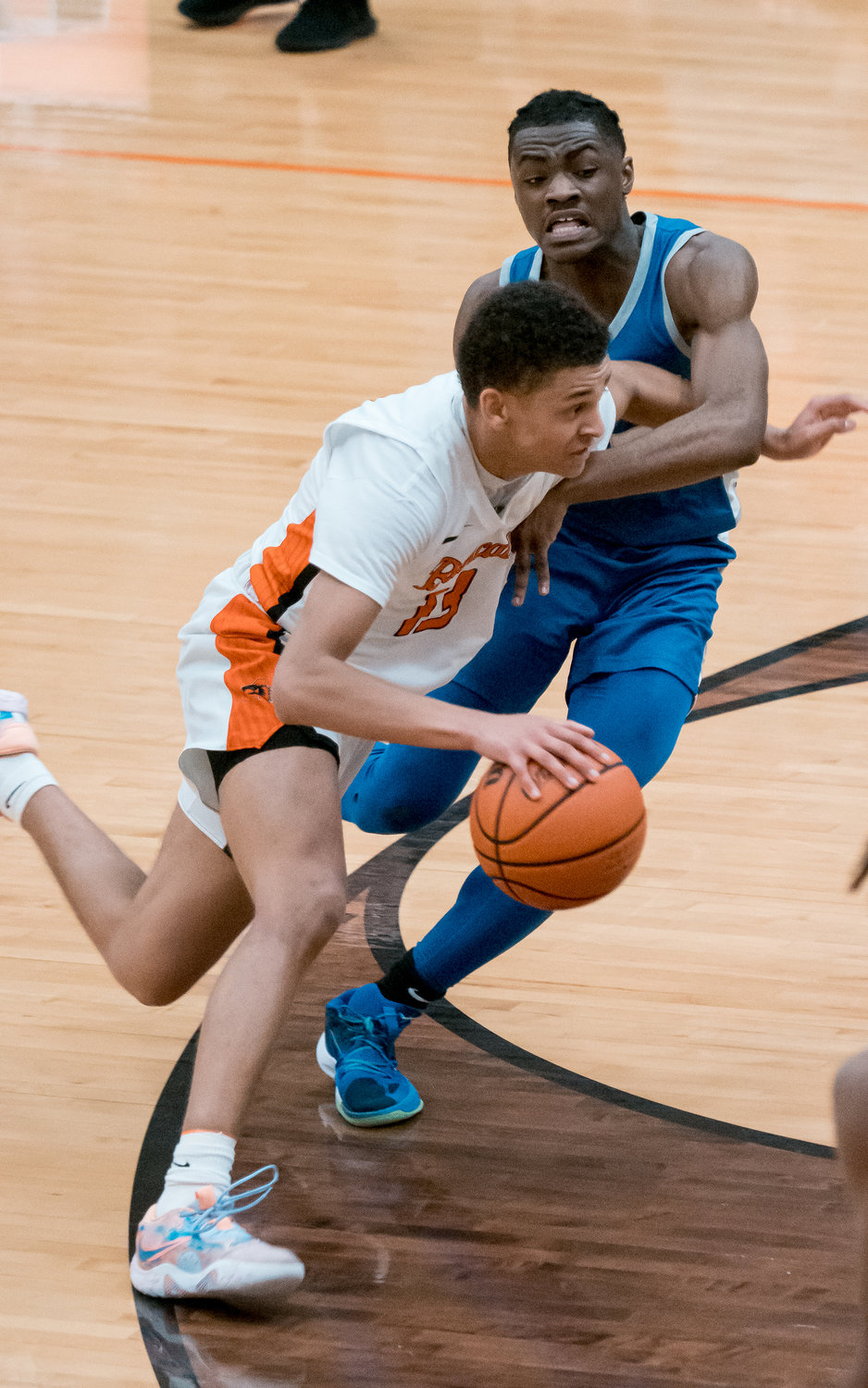 Aledo’s Brandon Fields drives the lane against Brewer on Jan. 6. Fields had 7 points in the game.

Midway through the fourth quarter Aledo’s lead extended to seven points – the largest lead of the contest for either team. Fields sank a short jump shot with 4:37 remaining in the contest to put the home team up 33-26.

True to form, the Bearcats going on a 6-2 run to start the fourth quarter triggered a  Brewer timeout in an effort to slow the pace of play.

Once again it worked.

Over the next two minutes the Bears erased Aledo’s lead before regaining control of the scoreboard when Perez hit his shot from beyond the three-point line. With 2:13 remaining in the game the Bearcats found themselves trailing 36-34.

Clock knocked down a long-range jumper from just inside the arch to tie the game up at 36-all with a buck 37 left to play before the game reached its inevitable conclusion.

“I thought we did a bad job down the stretch,” Robinson stated. “On the 7-0 run there we got a little lackadaisical on defense, and Brewer will punish you. That’s what they did.”

The Bearcats will be back in action on Friday when Granbury comes to town. Tipoff for that district matchup is slated for 7:30 p.m.