Aledo, Midlothian square off on Friday 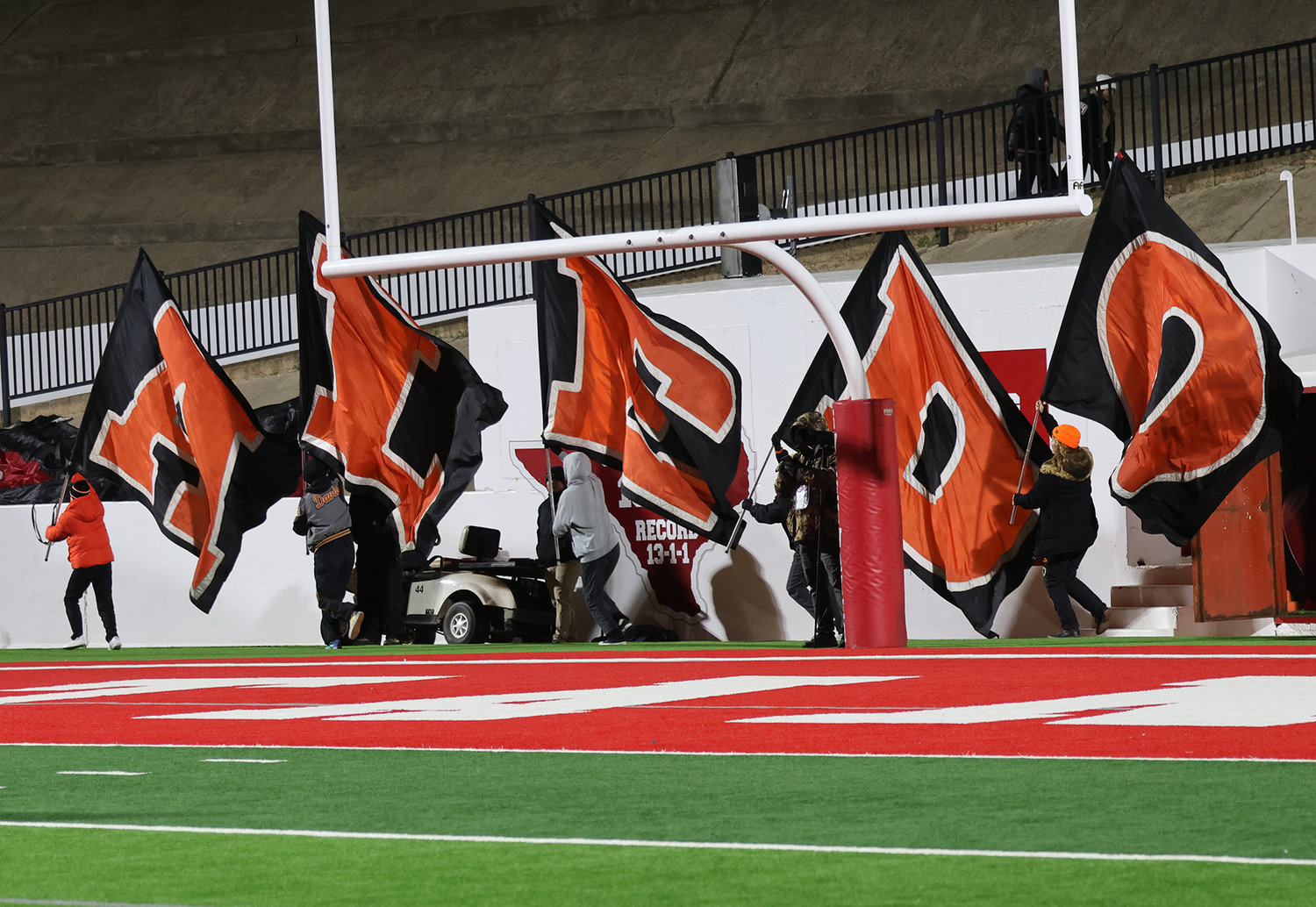 Defensively, we’ll have to play fundamental football. It’s a simple plan, but it’s not easy to do; tackle when you’ve got to tackle. Sounds easy, but you still have to do it when you’re in that situation. Offensively, we have to be able to spread the ball around, utilize all of our weapons.”
Aledo Head Coach Tim Buchanan
By Rick Mauch
The Community News

Here we go again — the Aledo Bearcats are facing an opponent who is expected to give them a challenge as they continue the quest for an 11th state championship.

And now, Aledo (10-2) hits the road again to take on — you guessed it — their biggest task of the season when they meet the Midlothian Panthers (12-0) in a Class 5A Division I regional semifinal Friday at 6 p.m. at Midlothian ISD Stadium.

“We started off so poorly. We didn’t play good early. I understand why people think a 12-0 team could give us problems,” Aledo coach Tim Buchanan said. “And they are a very good team on both sides of the ball.”

Of course, folks in Midlothian are likely saying the same thing about the Bearcats, who, clearly, are not the same team that started the season with losses to Dallas Parish Episcopal (24-17 on the road) and Denton Guyer (44-14) at home. Episcopal is the top-ranked private school in the state and Guyer is one of the top contenders for the Class 6A Division II championship.

After that 0-2 start, the first in Buchanan’s history as a head coach, Aledo has been unstoppable. And while most might think a team with nine state championships and a runner-up finish since 2009 has nothing to prove, there was still a sense of doing so, nonetheless.

And that’s exactly what they’ve been doing time and again.

First was a road trip to Burleson Centennial with a 108-game district winning streak on the line for Aledo. The Bearcats returned home with a 64-21 victory, handing the Spartans their lone defeat in a dozen games.

Then came a visit to another perennial power, Denton Ryan, a game folks had circled on their calendars ever since the UIL put them in the same district in February. Aledo returned home with a 35-21 win that clinched the District 3-5A Division I championship.

Bi-district brought on Killeen Shoemaker, believed to be the Bearcats’ biggest first-round test in many years. The Wolves came in with an identical 8-2 record out of a tough 4-5A Division I. Apparently, no one told the Bearcats the game was supposed to be close as they coasted to a 37-0 victory.

And last week’s game against Lubbock Cooper in Sweetwater matched Aledo with another team used to making deep playoff runs in recent seasons. Again, each team had the same record (9-2), but that proved to be pretty much the only similarity as the Bearcats controlled from the outset for a 45-21 win.

The Bearcats will face an offense in Midlothian similar to the one they saw against Burleson Centennial. And while Aledo won that game convincingly, Buchanan isn’t expecting similar results this time, though he does believe his team can win by following a simple game plan.

“Defensively, we’ll have to play fundamental football. It’s a simple plan, but it’s not easy to do,” he said. “Tackle when you’ve got to tackle. Sounds easy, but you still have to do it when you’re in that situation.

“Offensively, we have to be able to spread the ball around, utilize all of our weapons.”

Midlothian brings a stronger passing game than Centennial, though Buchanan noted the Spartans have improved in that category since their loss to the Bearcats.

Buchanan said cornerback Chris Johnson and guard Carter Campbell are expected to return to play this week. Like most any team still in the playoffs, the Bearcats are nursing a few lumps.

“If you’re not battered and bruised after 12 games, you ain’t playing,” Buchanan said.

While many of the games were long before Buchanan arrived on the scene, Midlothian leads the all-time series 6-4, one of only a few teams to have a series advantage over the Bearcats. Since Buchanan’s arrival, however, Aledo has won their only two meetings, 48-29 in 2018 and 34-28 in overtime in 2019, both district games.

Buchanan has only faced the Panthers once before as the 2018 victory was coached by Steve Wood.

In all, Aledo has outscored Midlothian 160-158 all-time and each team has posted two shutouts.

This will be the first meeting between the teams in the postseason.

In their two postseason victories, the Bearcats have yet to turn the ball over. They’ve also committed just a pair of five-yard penalties, almost completing the win over Cooper without one before being flagged in the final minute.

Defensively, they’ve taken the ball away three times. They’ve also shut down the run against Shoemaker (minus 28 yards on 19 carries) and the pass against Cooper (12 yards on two completions).

Converting third and fourth downs are clutch to any team competing for a championship, and the Bearcats are doing what needs to be done on both sides of the ball.

Offensively, Aledo is 12-of-22 on third downs in the postseason. They are also 4-of-6 on fourth down.

On defense, the Bearcats have limited their two playoff opponents to 4-of-20 on third down and 3-of-7 on fourth.

“Honestly, this week we’re going to have to be better than that,” Buchanan said. “We cannot have negative plays.”

The Bearcats and Panthers have a pair of common foes this season, Shoemaker and Justin Northwest. Each posted a pair of wins against them.

Aledo won 49-20 at Northwest to open district play. Midlothian defeated the Texans 51-34 at home to begin the postseason.

The Panthers defeated Shoemaker 32-27 in Killeen, coming from behind in the second half. Aledo had little trouble with the Wolves, 37-0 at home, in their playoff opener.

Time to start another streak

Two weeks ago Aledo won its 27th consecutive bi-district game dating to 1996. Last week they extended to 10 a streak of area-round victories.

However, last season’s 33-28 loss to Dallas South Oak in the third round ended a streak of eight consecutive seasons in which the Bearcats reached at least the state semifinals. The streak included state championships in 2013-14, 2016 and 2018-20, with a state runner-up finish in 2017.

South Oak Cliff went on to win the state championship. In 12 of the past 13 seasons either the Bearcats or the team that eliminated them won state, the only exception being Mansfield Lake Ridge, who eliminated them in the state semifinals in 2015 and finished as state runner-up.

Midlothian, meanwhile, would match its deepest playoff run since Doug Wendel became head coach in 2015. The Panthers were 8-5 last season and reached the third round. Since 2017 they’ve advanced to at least the second round each season.

Going into this weekend, Aledo and Burleson Centennial (11-1) are the only teams remaining in the postseason from 3-5A Division I. If they win this weekend, they will meet again next weekend.

Centennial is facing upstart Abilene (6-6), which entered the playoffs with a losing record but has pulled off back-to-back lopsided upsets against El Paso Del Valle (10-2) and Red Oak (9-3).

In postseason rematches the Bearcats are 5-0 since 2009, including 3-0 against Stephenville and 1-0 against both Saginaw Boswell and Mansfield Legacy.

Buchanan said whomever the Bearcats or Midlothian play in the next round, it has already been decided the game will be played at The Star in Frisco, the practice facility of the Dallas Cowboys.

Game at a glance

Midlothian defense: The Panthers are surrendering an average of 18 points and can be scored upon, as evidenced by five opponents scoring at least four touchdowns on them. However, they do have a pair of shutouts and have limited six foes to 14 points or less. Leaders are: DB Carsen Bates, 70 tackles, fumble recovery; LB Ny'tori Burnett, 69 tackles, 6 for loss, DT/DE Bryce Starlin, 6 tackles for loss, 4 sacks.