Bearcats gain confidence after big win against The Colony 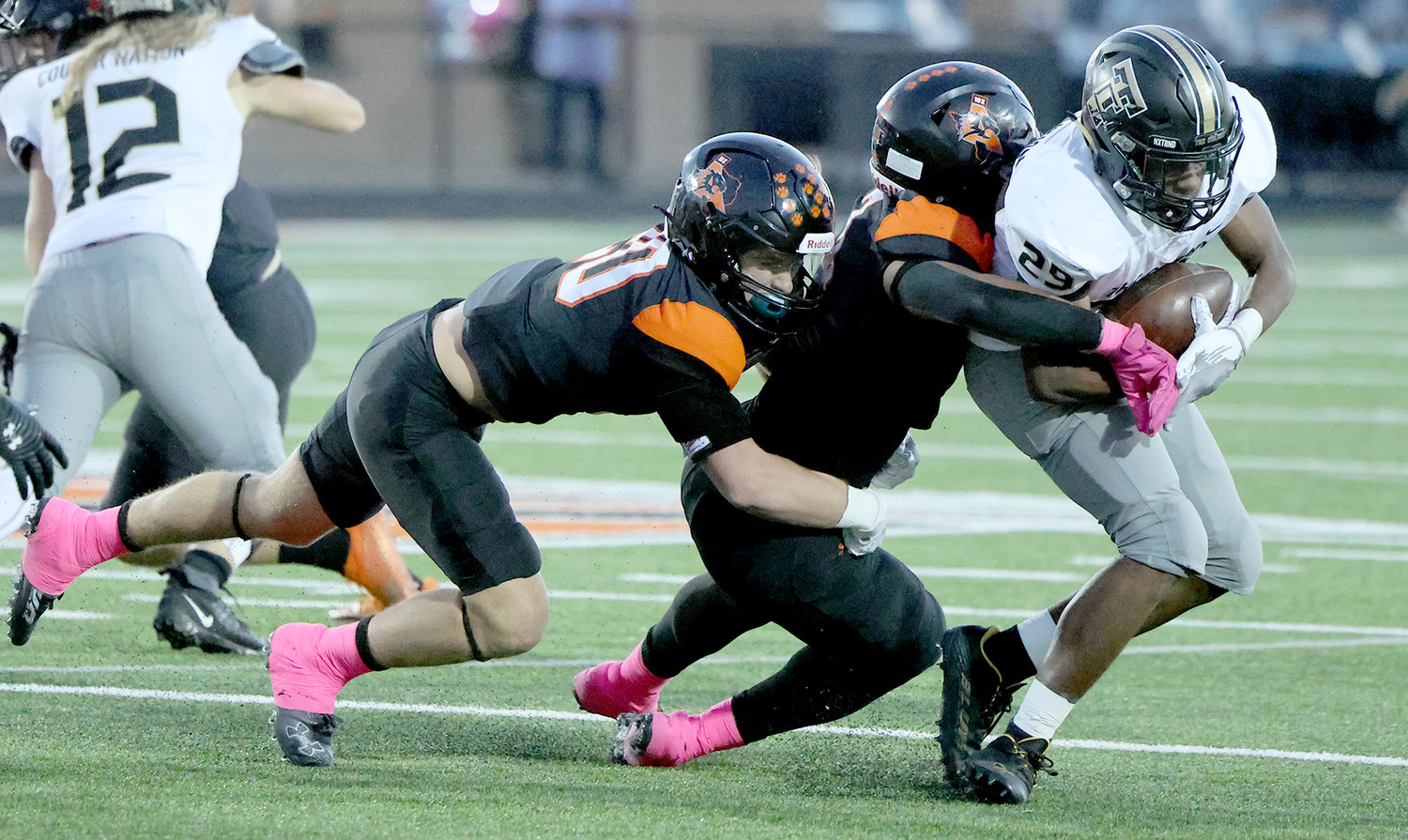 Being able to rack up some points on this team, who barely lost to Denton Ryan last week, definitely gave us some confidence that we are a good football team, and we can win some big-time games.”
AHS Quarterback Hauss Hejny
By Ryan Wade
The Community News

Beyond just a blow-out win on their home field in front of a capacity crowd, Aledo’s young Bearcat football team came away with more confidence following their 52-7 shellacking of the visiting Cougars from The Colony High School on Friday.

“Those first two losses, they were really draining to our confidence,” said junior starting quarterback Hauss Hejny. “Our coaches have been working on us about keeping humble; working day-in and day-out; focusing on us and not listening to the outside noise. Being able to rack up some points on this team, who barely lost to Denton Ryan last week, definitely gave us some confidence that we are a good football team, and we can win some big-time games.”

Aledo improved to 4-0 in district play with the win over The Colony on Friday night, and 4-2 overall in the 2022 gridiron campaign.

Hejny had one of his personal best performances to date against the visiting Cougars. The young signal-caller completed 75-percent of his passes on the night going 8-of-12 for 267 yards and a pair of touchdowns.

As efficient as he was in the passing game, Hejny was just as effective in the Bearcat rushing attack. He added two rushing touchdowns to his highlight reel on eight carries while amassing 77 yards on the ground.

When asked about the development of his first year starting quarterback, Coach Tim Buchanan said, “Every game he gets better. That’s all you can ask of any high school kid, especially a young kid like him. He just continues to get better every game, and you can’t ask for anything else.”

The Bearcats wasted little time putting The Colony in a bad way. Aledo’s defense came out strong forcing the Cougars into an early three-and-out situation on the first possession of the game. A quick sack coupled with a near interception forced The Colony to punt the ball away from their own 20. A botched punt sailed out of bounds at the Cougars 47-yard line giving Aledo a short field in their first possession.

Following an incomplete pass on the first play from scrimmage for the Bearcats, the offense chipped away with small gains the next two plays bringing up a fourth-and-three situation, potentially giving the Cougars the ball back with no damage done.

Aledo’s offense stayed on the field, however, attempting to convert the short yardage to keep the drive alive. Hejny took the shotgun snap, faked the handoff on the option before tucking the ball, making his way around the weak side of the defense as his offensive line sealed the edge. From there a couple shifty moves on a pair of would-be tacklers gave him room to run as he scampered across the goal line from 40 yards out to put the Bearcats on the board. Cole Crawford’s extra point sailed through the uprights to make it a 7-0 affair less than three minutes into the contest. 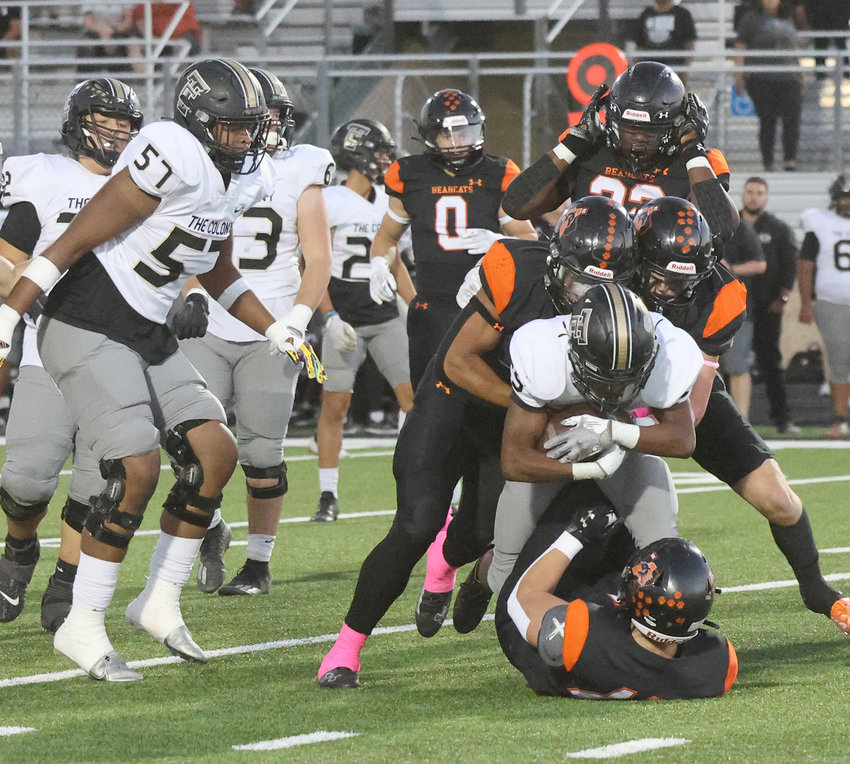 Ky Howington (5) and Dahvon Keys (3) bring down a runner from The Colony in Friday night action.

Big plays and quick scores were a common theme for the Bearcats in the first half. On Aledo’s ensuing possession Hajny connected with wide receiver Gavin Olenjack on a 33-yard pitch-and-catch that put the Cougar defense on its heels. Eight plays later Davhon Keys found paydirt on a one-yard run that put the home team on top 14-0 with 3:14 left in the first following Crawford’s extra point kick.

The third Bearcat possession of the night lasted just 14 seconds, but ended the same as the first two. A wide receiver screen pass to Jalen Pope from Aledo’s own 33-yard line ended up going all the way after he broke a pair of tackles along the visiting sideline. A foot race ensued with Pope crossing the goal line ahead of a swarm of Cougar defenders for the third Bearcat touchdown of the night.

The Bearcats kept the pedal to the metal in the second quarter as they added three more scores before the end of the first half.

Kaydon Finley made a gorgeous basket catch on a pass from Hejny picking up 41 yards on the play before being brought down just shy of the goal line at the Cougar one-yard line. Hawk Patrick-Daniels capped off the drive with a run up the middle for the score putting the Bearcats up 28-0.

On the following Cougar drive Bryon Wheeler burst through the offensive line from his defensive tackle position and nearly came away with a sack as he forced The Colony’s Carson Cox to make an ill-advised throw. Keys came up with the interception before running untouched 73 yards for the scoop-and-score as Aledo took a 35-0 advantage with 6:11 remaining in the half.

The Colony finally managed to crack open the goose egg on their side of the scoreboard with 4:26 remaining in the half. However, Aledo quickly answered back as Hejny picked up his second rushing touchdown of the game with a four-yard scamper into the end zone with just 29 seconds left until the break.

When play resumed in the second half Hejny and Finley connected on one more big play that went 70 yards for the final Bearcat touchdown of the evening.

The Bearcat defense showed a lot of grit in the contest as well. The Colony came into the game averaging 31 points per game in their five previous starts. Aledo’s defense held the Cougars to their lowest output of the season while forcing three turnovers in the game. Chris Johnson joined Keys with an interception of his own. Meanwhile, Skyler Frank forced and then recovered a fumble late in the game to all but seal The Colony’s fate.

Looking around the corner at what awaits the Bearcats on the schedule Buchanan emphasized the importance of his team continuing to improve.

Next up on the itinerary for Aledo is a visit by the South Hills Scorpions for Bearcat Homecoming. The Scorpions are 1-4 on the season while still looking for their first district win of the year. Kickoff for Friday’s matchup is slated for 7 p.m. at Bearcat Stadium.