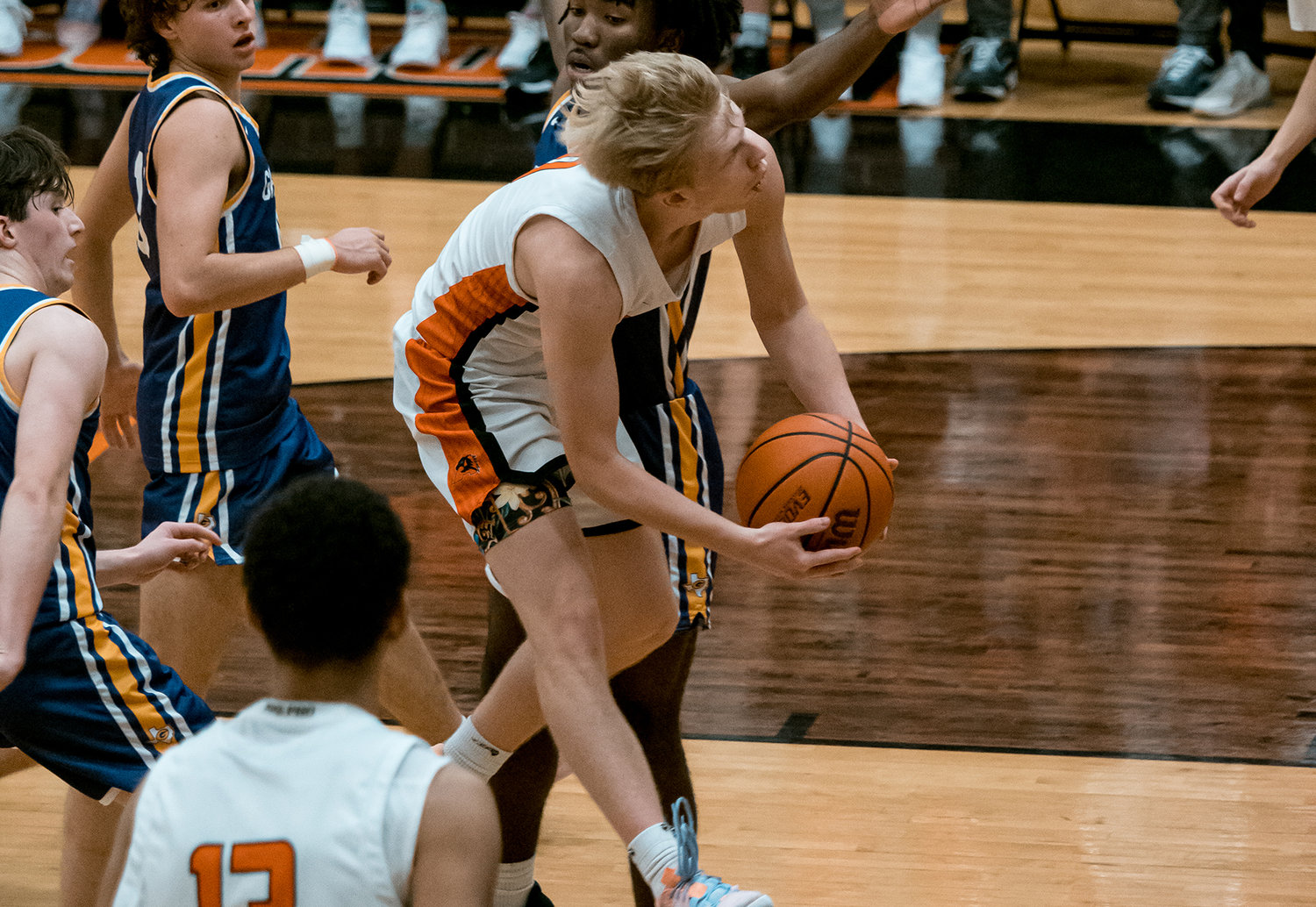 Drew Clock draws a foul while attempting a shot during varsity basketball action on Friday, Jan. 13. The Bearcats went on to defeat Granbury by a 38-35 tally.
Ryan Wade/The Community News 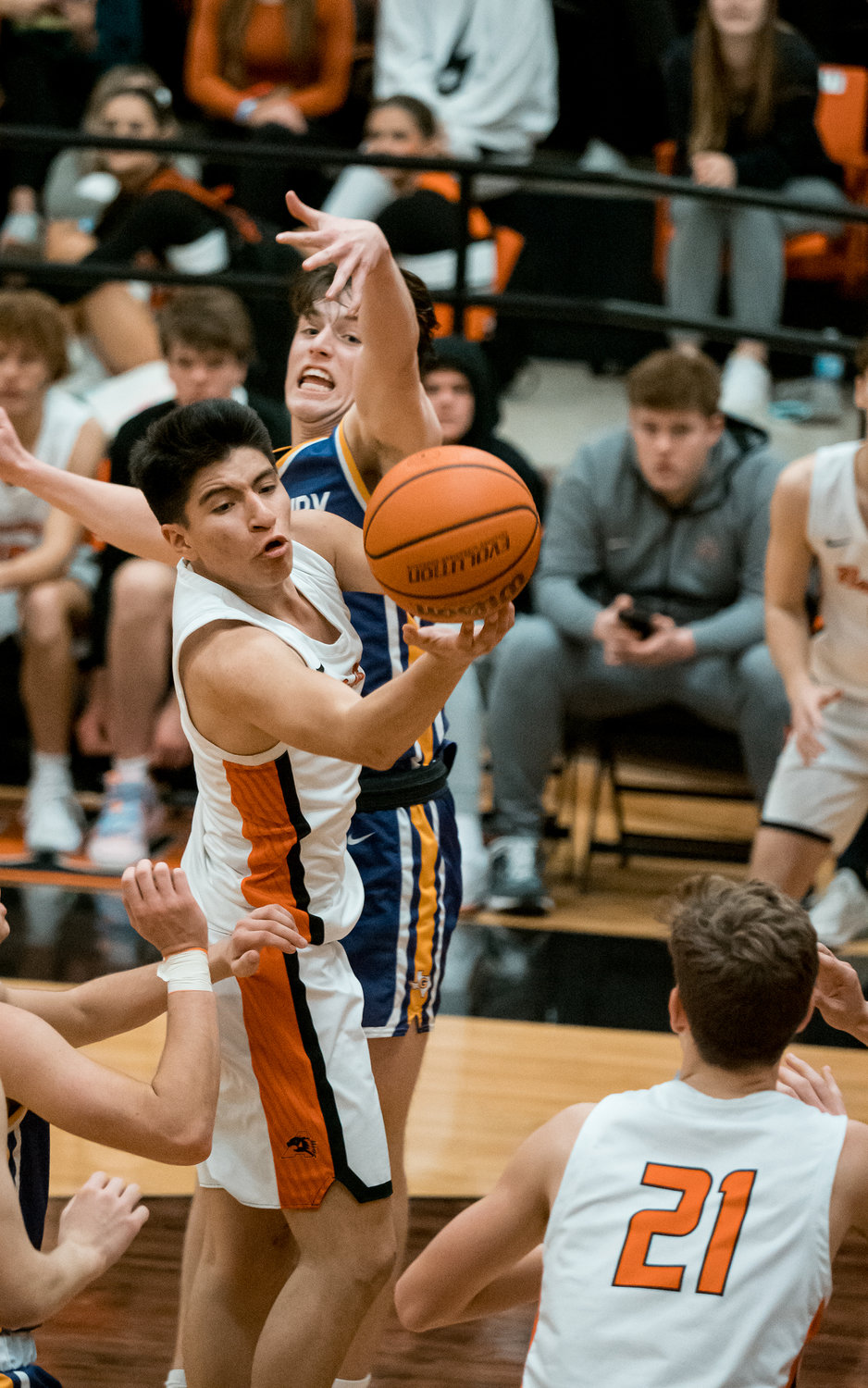 Aledo's Ulises Garcia looks to pass the ball to teammate Jack Sawyer after being met in the lane by a Granbury defender on Friday, Jan 13. The Bearcats went on to win 38-35.
Ryan Wade/The Community News
Previous Next
Posted Wednesday, January 18, 2023 3:45 pm
By Ryan Wade
The Community News

Aledo’s Bearcat varsity hoops squad successfully thwarted a pair of invasion attempts to their home court over the last week. On Friday, Jan. 13, the Bearcats held on to win a close 38-35 contest against the Granbury Pirates. They followed up that performance with a 22-point rout of Wichita Falls Rider on Tuesday, Jan. 17,  winning by a final tally of 65-41.

After collecting back-to-back wins, the Bearcats’ overall record improved to 12-7 on the season (3-2 in District 5-5A).

“Rider beat Azle,” Aledo head coach JD Robinson stated, harkening back to the Bearcats’ loss to the Hornets on Jan. 10. “Rider got them into overtime. They can get hot from three. Tonight, we did a good job defensively of not letting them get loose too much. Still, I think we gave up too many points. We’re always trying to set a goal within the game. I felt like we gave up too much.”

Nearly three minutes melted off the clock to start the game before either team got on the board with a bucket. On the defensive end of the floor the Bearcats pounced on the Raiders, not allowing Wichita Falls to get off a single shot early.

Meanwhile, Aledo struggled to post a score of their own, but not for a lack of trying. The Bearcats took shots on the basket in each of their first three possessions but could not get the shots to fall. Drew Clock was finally able to break the stalemate at the 5:03 mark of the first quarter when he knocked down a jumper from the free throw line to put the hometown team on the board. Rider was called for a foul on the play, giving Clock an opportunity to convert three the old-fashioned way. The free throw missed the mark, however, as Aledo went up 2-0.

The rest of the first quarter belonged solely to the Bearcats. In the final 2:30 of the first quarter Aledo dropped 11 more points while shutting Rider completely out in the first eight minutes of action. Clock dialed up a long-range shot to hit for three before following up with a short jumper inside the paint on the ensuing possession. Brandon Fields picked the pocket of a Raider player before going coast-to-coast for a breakaway layup to put the Bearcats up 9-0. He added two more to the hometown tally, knocking down a pair of shots from the charity stripe with 1:04 left in the opening quarter to put Aledo up 11-0. Hauss Hejny capped off the offensive onslaught for the Bearcats in the first quarter, knocking down a short jumper in traffic.

At the end of one quarter of play Aledo held a 13-0 lead. Rider trailed by double-digits the rest of the way.

“It was ugly to start,” Robinson said of the first quarter. “We persevered. We really tried to speed them up a little bit to see if we could get some easier shots and not have to go against their zone on every possession and see if we could get some stuff in transition. I thought Drew (Clock) played really well tonight. He did a good job of not settling too much, of punching gaps, and putting pressure on the defense.”

Points in transition were a point of emphasis for Robinson’s strategy that his squad carried out with great efficiency. Clock forced a pair of notable turnovers in the second quarter that turned into fast-break points on the offensive end of the floor for the home team.

With just less than five minutes to play Clock punched the ball loose from a Rider guard. He quickly scooped up the loose ball before hitting Exavier Anderson on the outlet pass with nothing but wide-open space between Anderson and the basket.  Anderson took flight, gently laying in the uncontested layup as the Bearcats took a 13-point advantage at that point.

Little more than two minutes later Clock was at it again, creating chaos on the defensive end of the floor. After forcing another turnover, he took the ball coast-to-coast himself, capping off the fast-break score with a layup of his own.

At the end of the first half Aledo held a commanding 31-17 lead over the Raiders.

“Every game is a grind, so to get one like that is good,” commented Robinson. “We were able to get some other guys in there to play.”

And those other guys took full advantage of the opportunity.

Defensively, Robinson challenged his young subs not to surrender more than eight points in the final four minutes of play. They held Rider to seven points.

On the offensive end of the floor Owen Peterson knocked down a pair of three pointers in the final quarter of action. Boogie Owens and Jack Sawyer had long-range splashdowns of their own as they hit their first three-pointers of the season late in the contest. Owens knocked his three-pointer down in front of the home team bench, sending his teammates into a frenzy as he collected high fives as he trotted down to the defensive end of the floor. The score with 25 seconds remaining in the game ended up being the last of the contest to close out the game in style for Aledo.

With just 16 seconds left in the game and his team up by one, Clock stepped to the free throw line before knocking down both shots from the charity stripe to give Aledo a 38-35 advantage.

On the ensuing possession the Pirates scampered across half-court before calling a timeout with 10 seconds remaining. As that break in the action came to an end Granbury quickly called a second timeout to complete their strategy session attempting to send the game into overtime.

As play resumed Granbury managed to get a look at the hoop from behind the arc. The ball found nothing but iron as Sawyer pulled down the rebound that would’ve sealed the fate of the Pirates.

However, Granbury managed to tie up the ball, creating a jump ball situation. With the arrow pointing in the visiting team’s direction, the Pirates had one last attempt to cinch up the score.

Aledo’s defense held strong to bring an end to the drama and to the Bearcats’ losing skid at the same time.

“We had a hard-fought game against Brewer, obviously,” Robinson said following the close win over Granbury. “Azle I just didn’t think was our best effort. We didn’t shoot the ball well. I think we were 3-for-17 from three, and that affected our defense. I thought we were a lot more mentally tough [against Granbury].”

Aledo will hit the road again on Friday when they travel to Justin to take on Northwest in another District 5-5A matchup.