On to regionals to face Midlothian 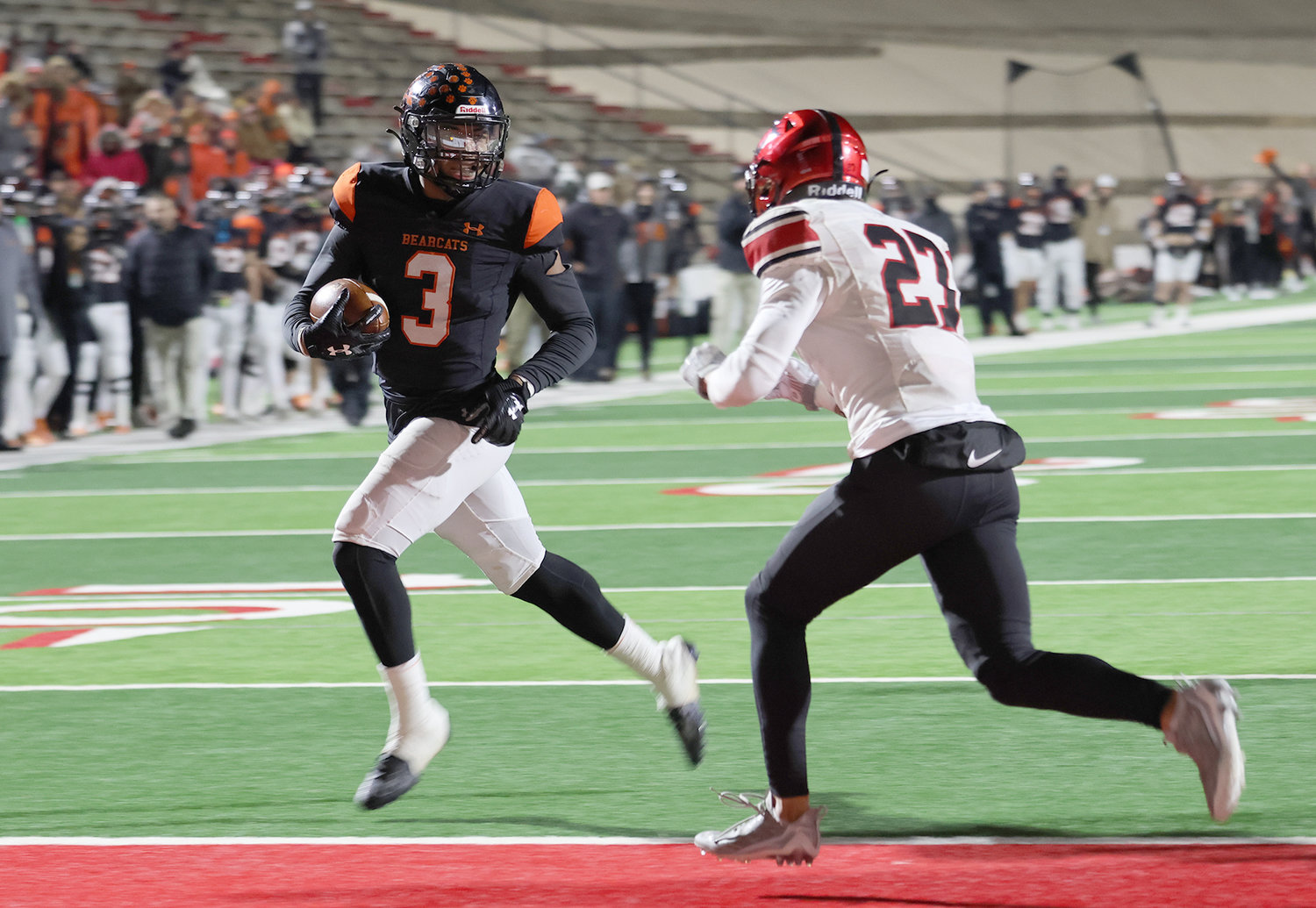 Junior running back Dahvon Keys crosses the goal line for one of his two touchdowns.
Mercedes Mayer/Aledo ISD 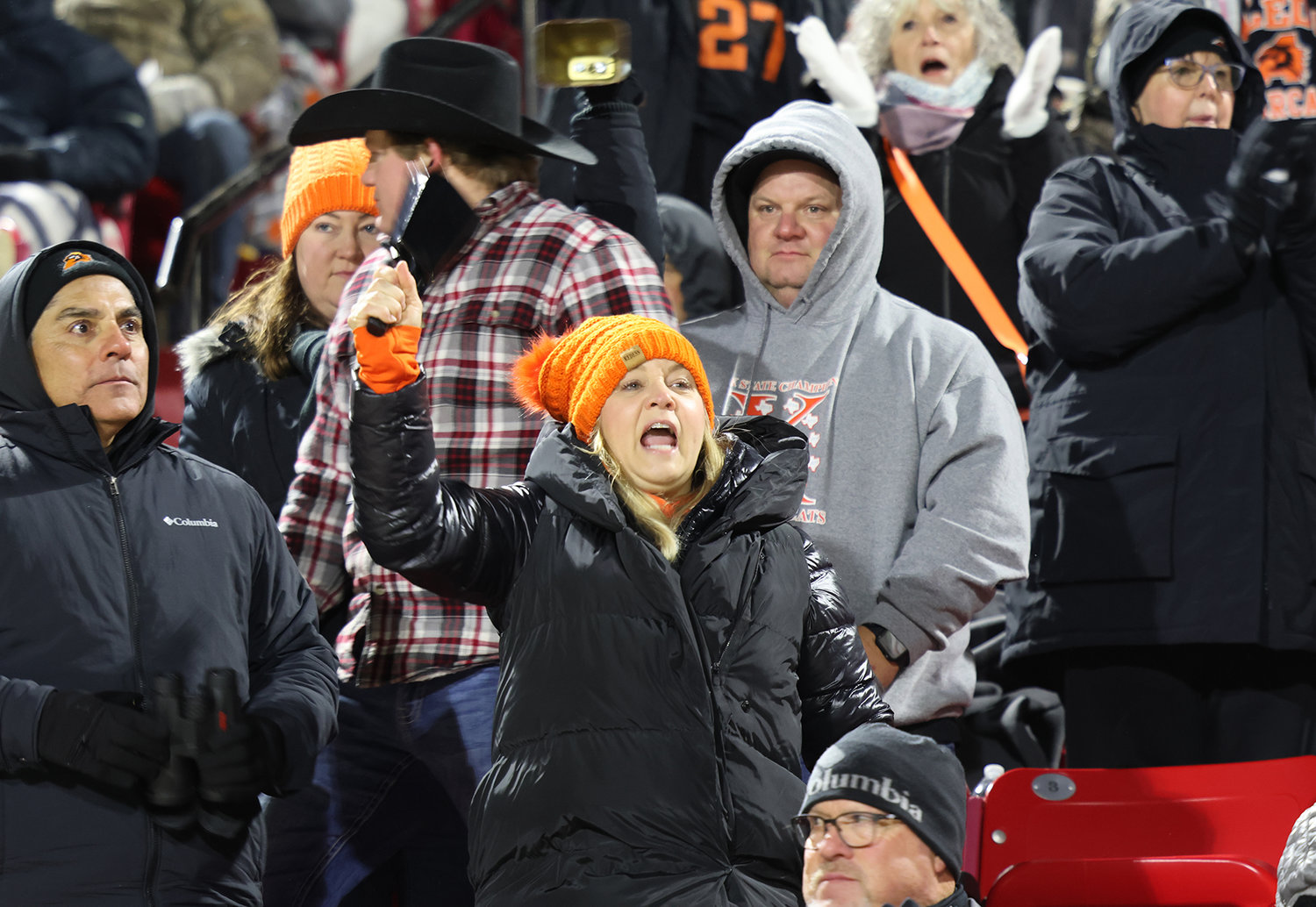 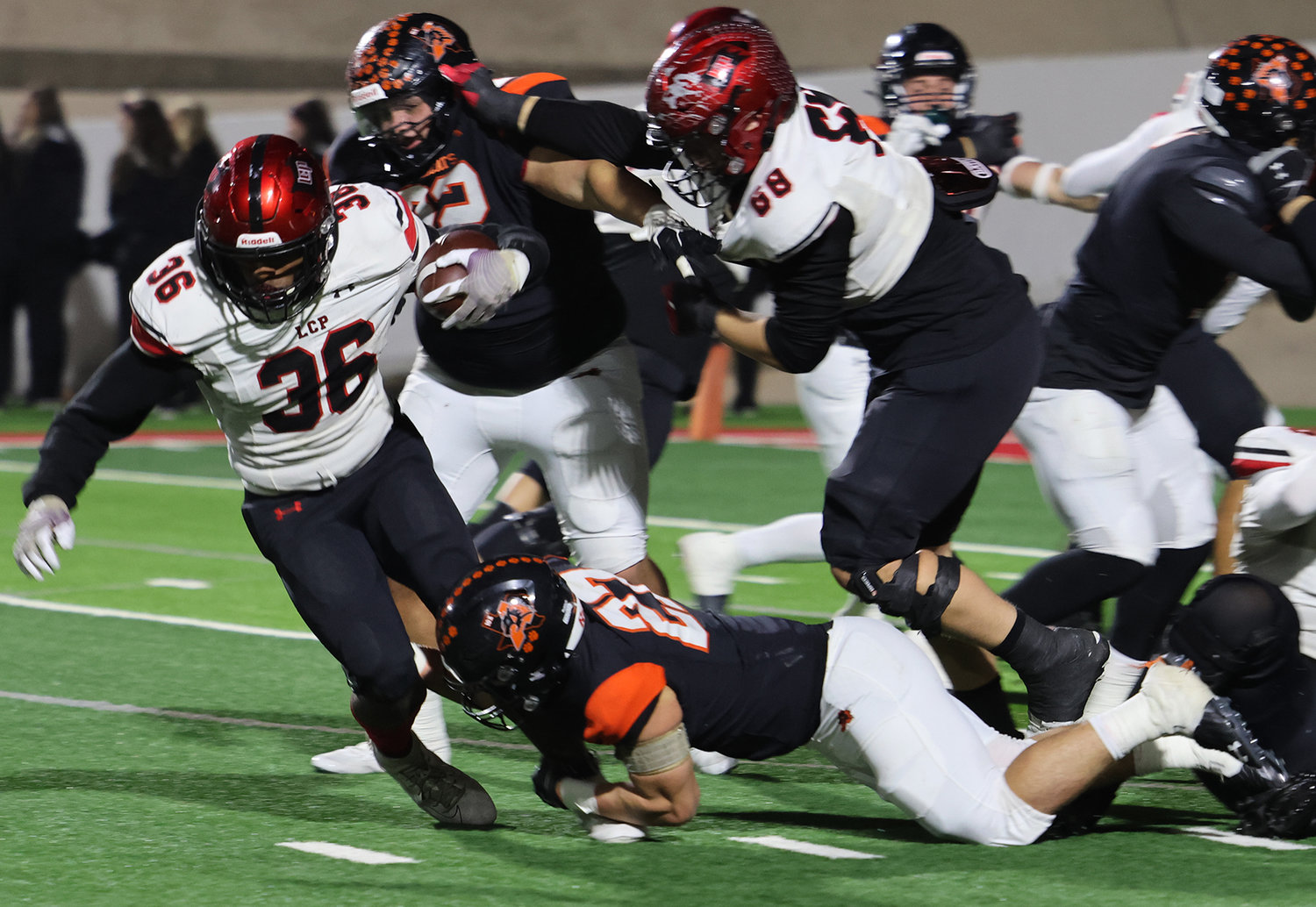 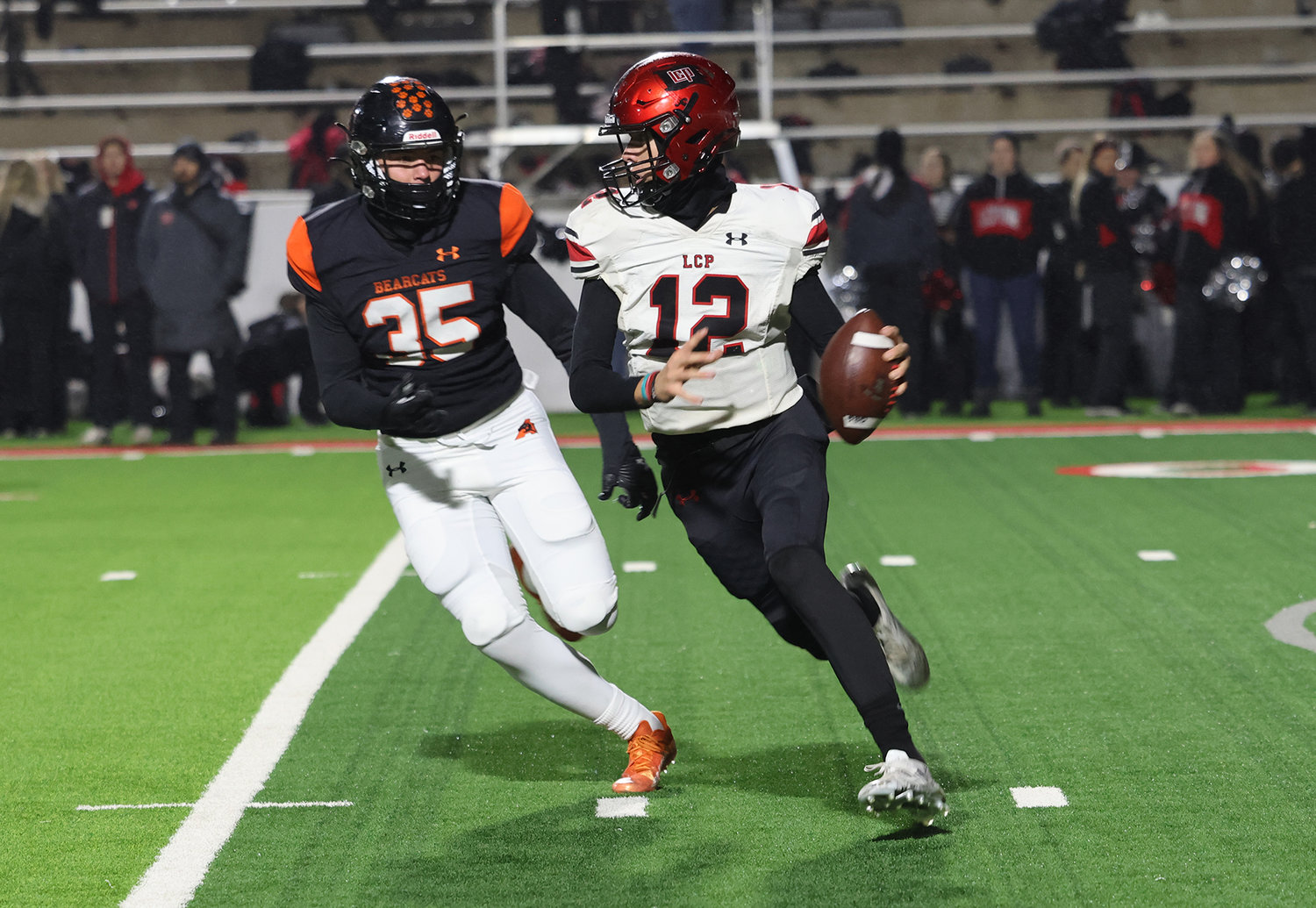 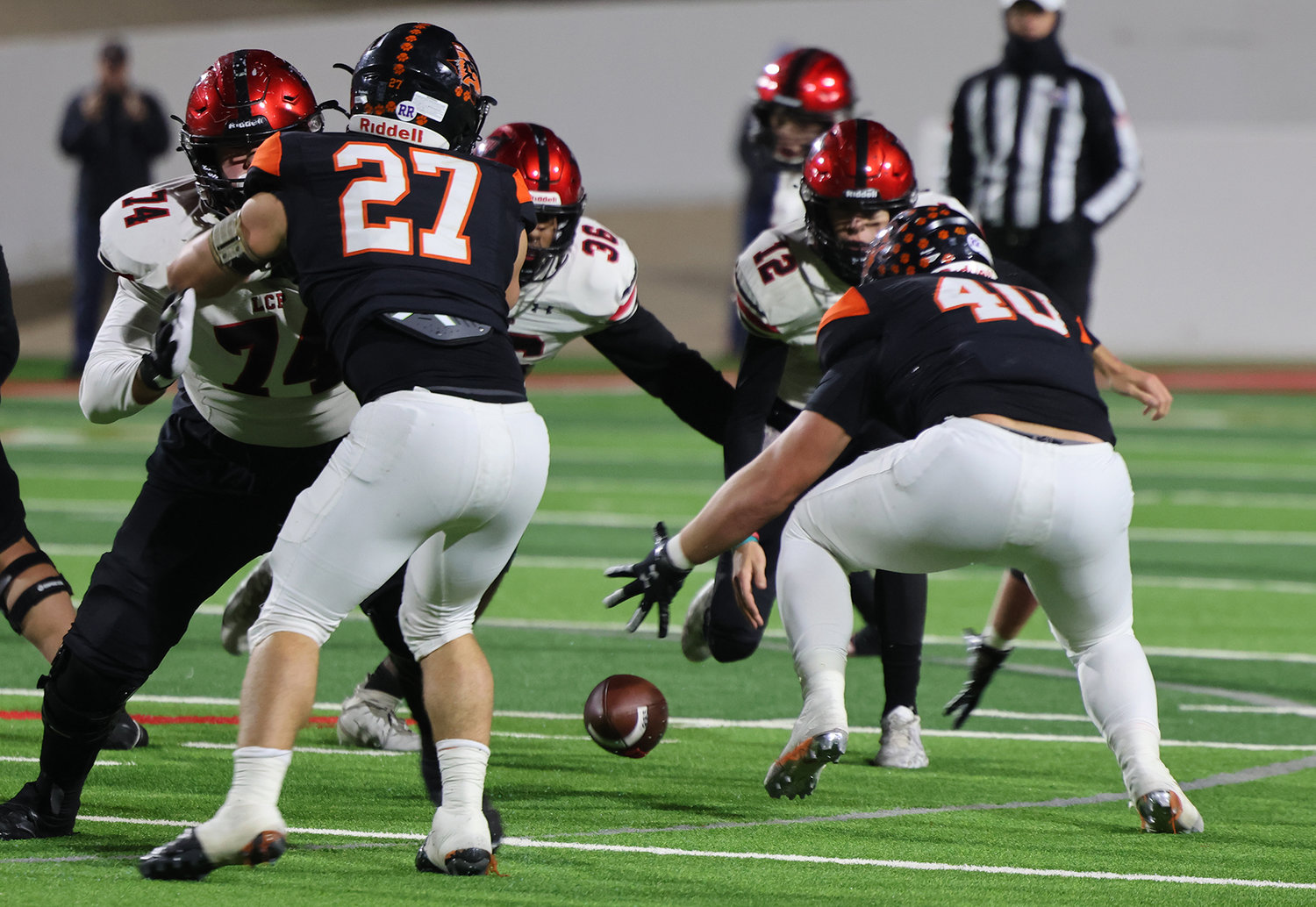 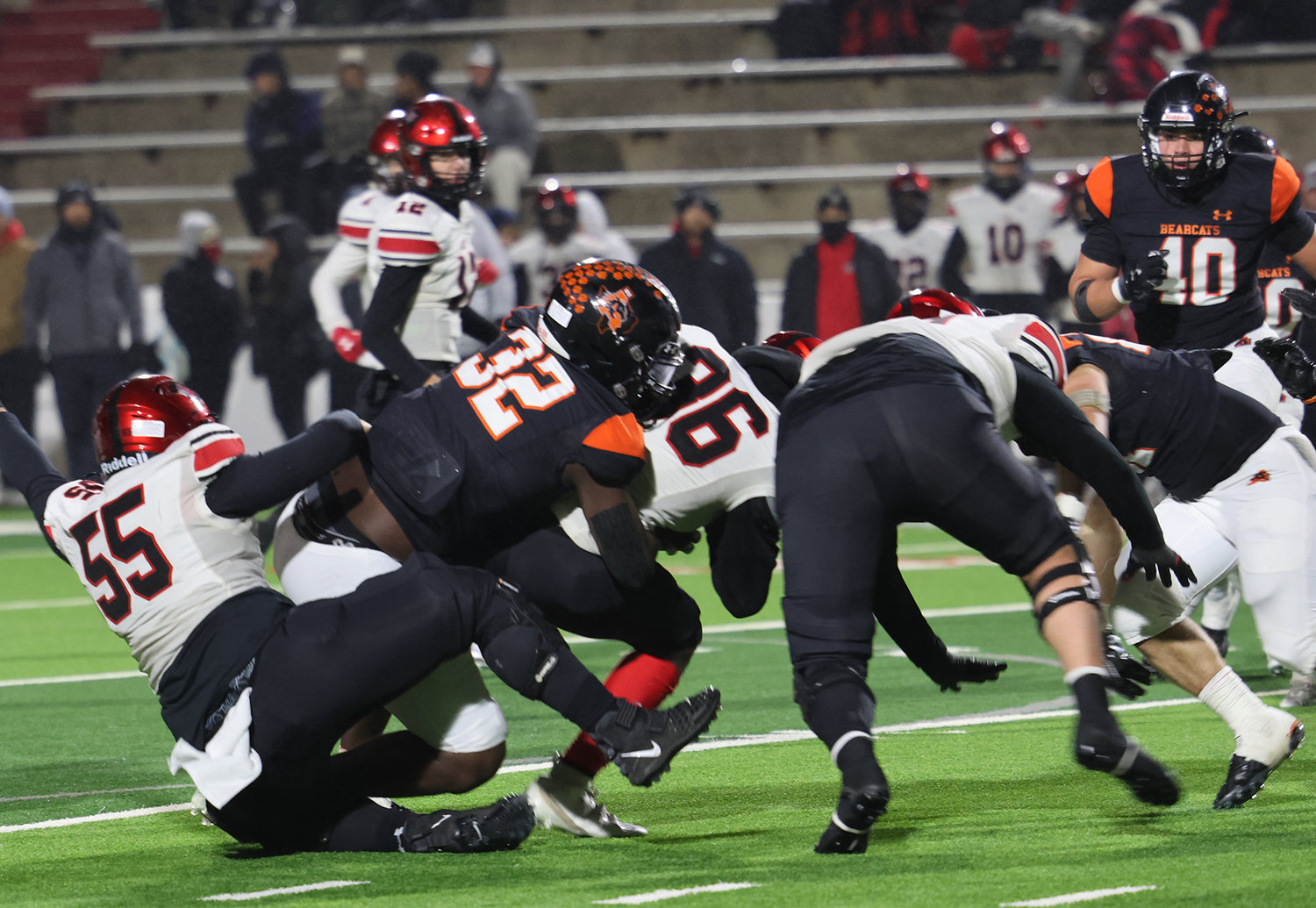 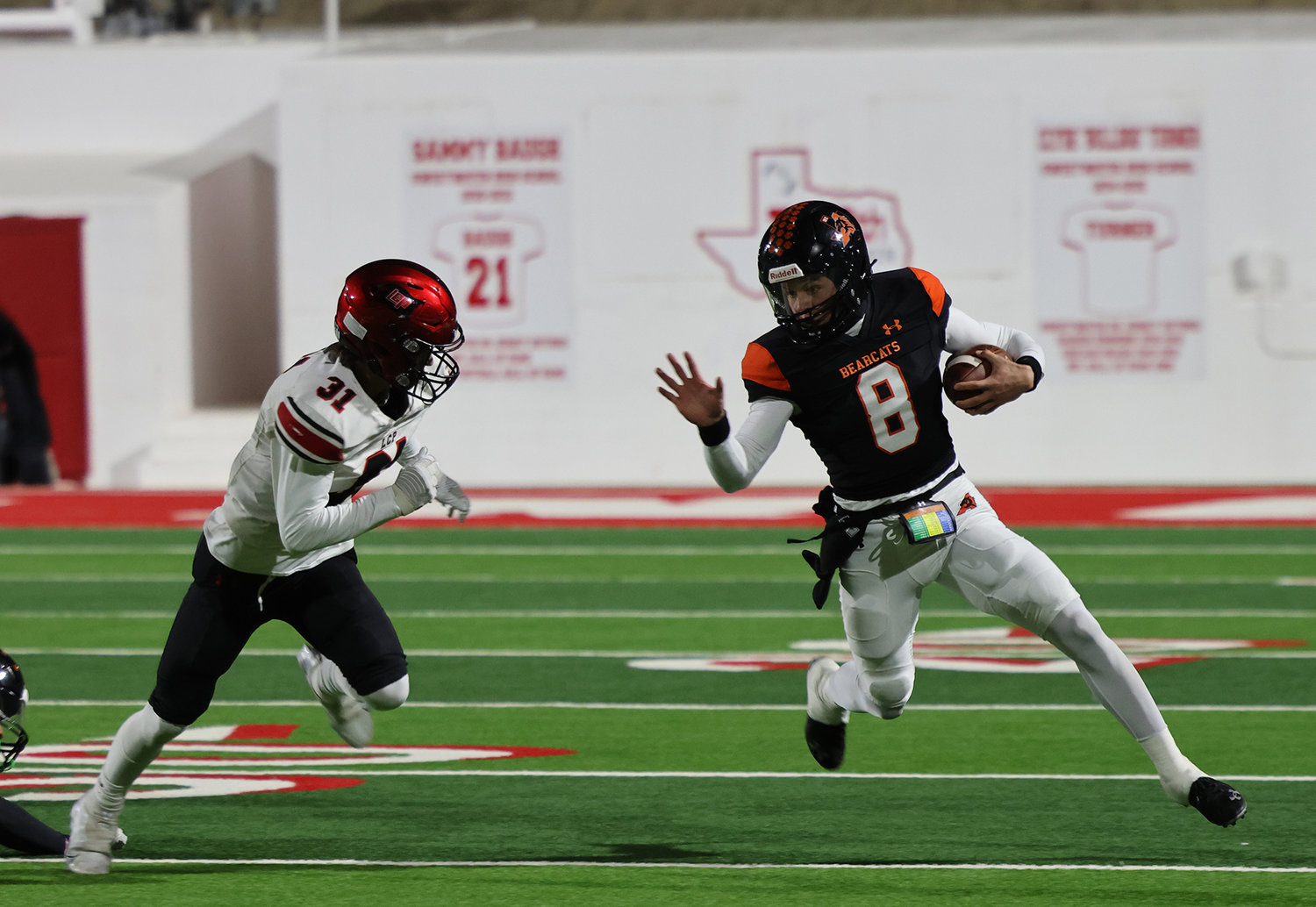 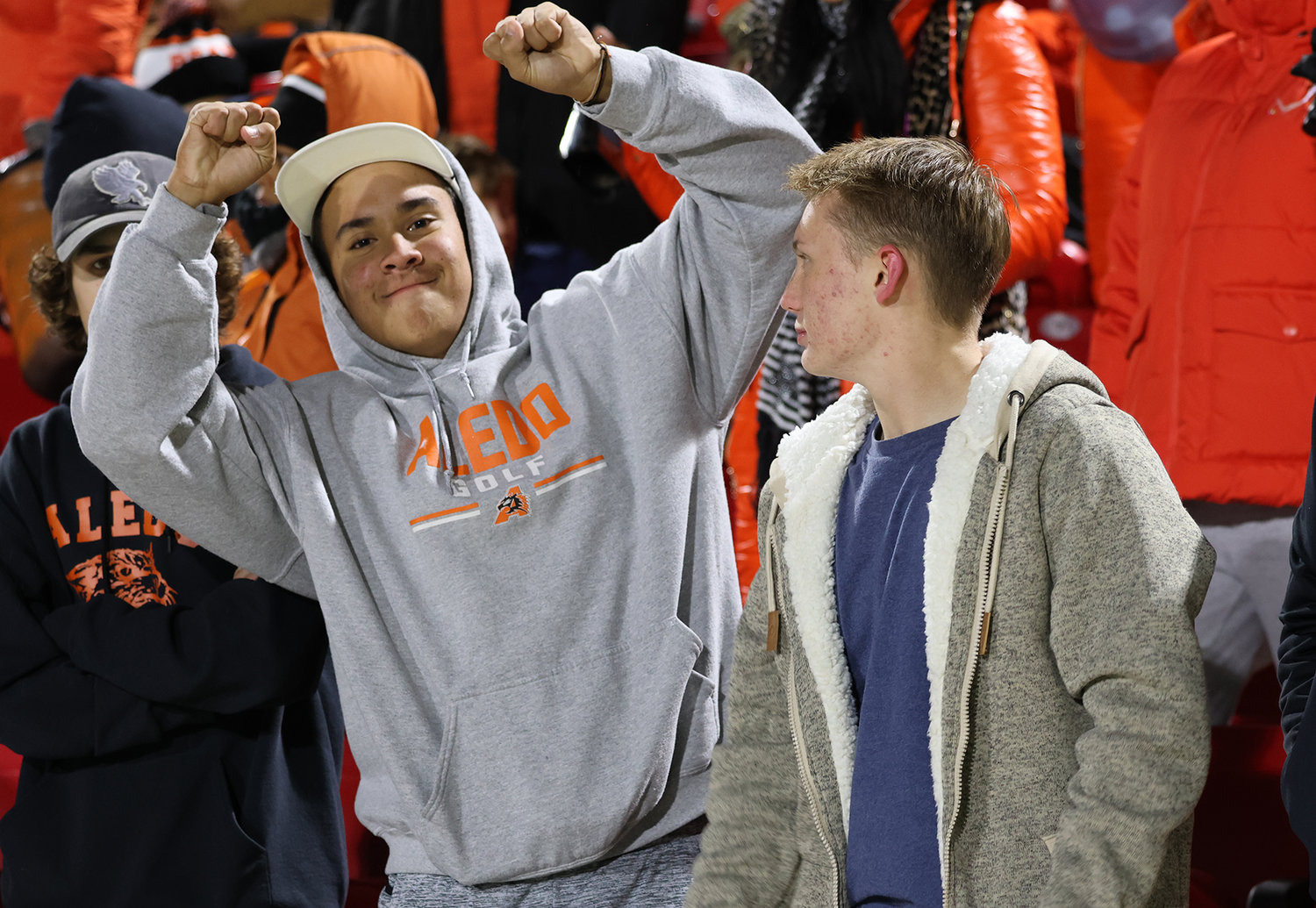 Fans get into the action on a cold night in Sweetwater.
Mercedes Mayer/Aledo ISD 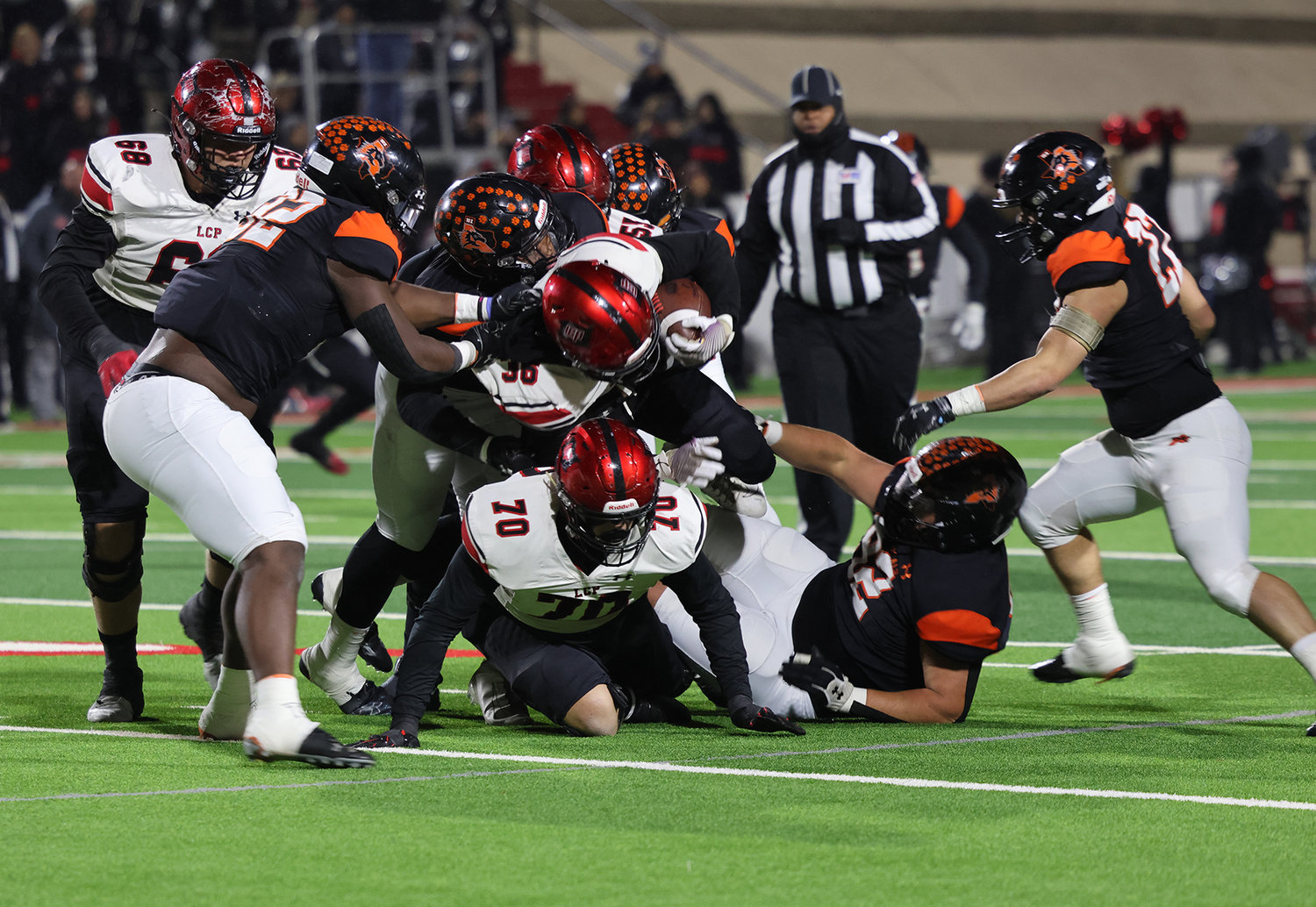 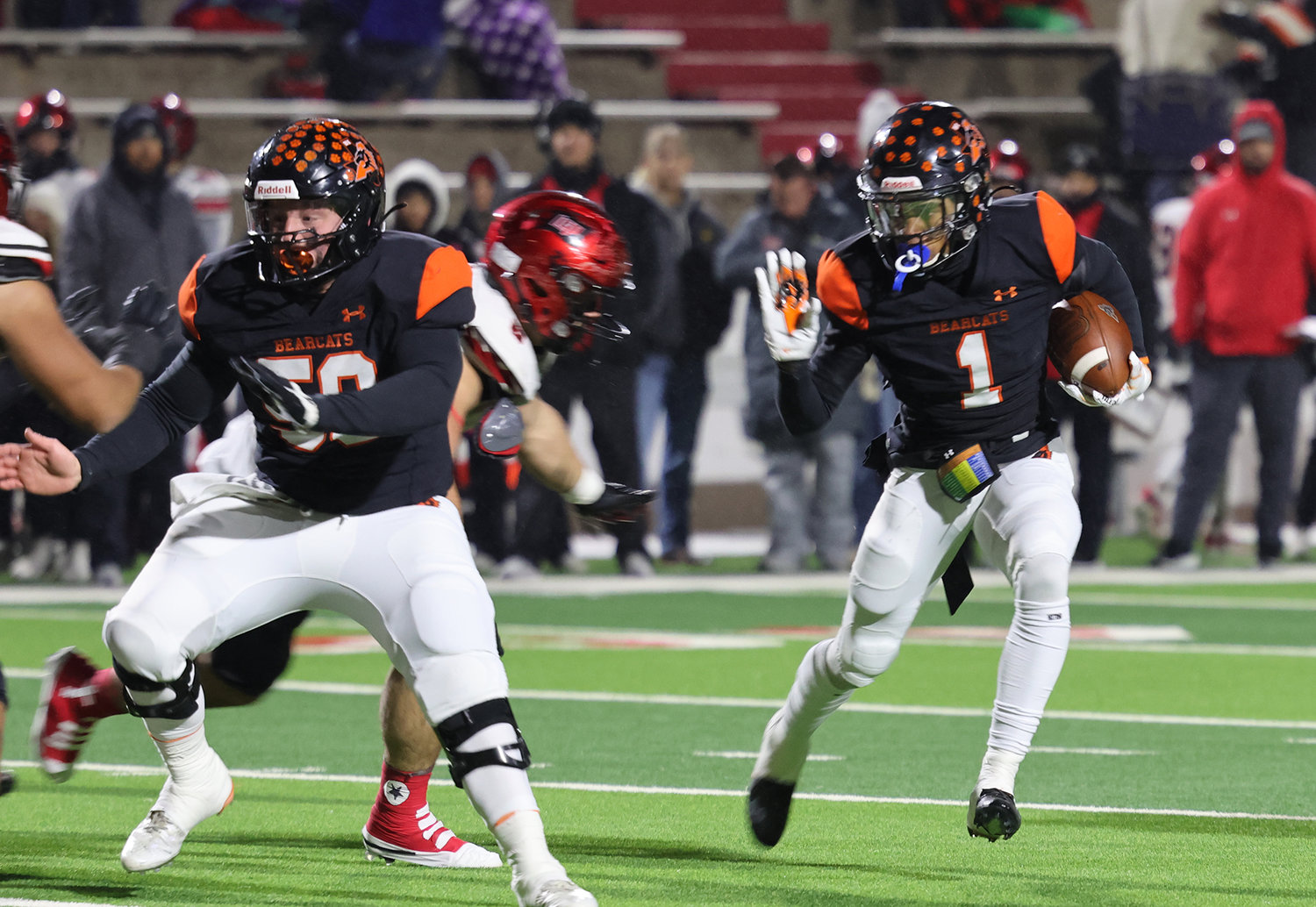 I definitely think we are playing very disciplined football. In the second half [of the season] we started getting better and we’ve just kept it going in the playoffs. Hats off to our offensive line and receivers.”
Aledo quarterback Hauss Hejny
By Rick Mauch
The Community News

Editor's note: This story was updated at 2:50 p.m. on Saturday, Nov. 19, to add upcoming game information.

With a game time temperature of 34 degrees and a wind chill of 26, the Aledo Bearcats froze the Lubbock Cooper Pirates’ hopes of an upset with a resounding 45-21 victory in their Class 5A Division I area (second) round matchup Friday night at the Mustang Bowl in Sweetwater.

Aledo (10-2) was in control from the outset en route to its 10th consecutive win. It’s also the 10th straight season the Bearcats have won a second-round postseason game. Of course, that’s going to happen when you’ve played in 10 of the past 13 state finals and won nine of them.

Cooper (9-3) saw its streak of advancing beyond the area round end at four. The Pirates also fell to 0-2 all-time against the Bearcats, with their previous meeting also meeting in the postseason, a 28-21 Aledo victory in the semifinals. The Bearcats won state a week later.

The Bearcats and Panthers were in the same district not so long ago. In 2019, their last meeting, Aledo avoided an upset with a 34-28 overtime victory.

This will be the first time the teams will meet in the playoffs.

The game Friday featured a triumphant return by Aledo starting quarterback Hauss Hejny, who missed the Bearcats’ 37-0 bi-district victory against Killeen Shoemaker with an injury. There was no sign of injury against Cooper as Hejny rushed for 197 yards and two touchdowns on 12 carries.

On the game’s first play, Hejny broke free for a 57-yard run. On the next play, Hawk Patrick-Daniels finished the two-play drive with a 24-yard touchdown run and, just like that, the Bearcats led 7-0 and would never look back.

“I definitely realized I was back with that run,” Hejny said. “It definitely gave us momentum. But I still had it (the injury) in the back of my mind.”

However, there was no evidence of that for those looking on. Hejny would later add a 50-yard run for a touchdown — after he bobbled a snap and picked it up. Seven of his carries went for at least 10 yards.

Hejny also connected with Patrick-Daniels for a 47-yard touchdown on a screen pass on Aledo’s third possession late in the first quarter for a 14-0 lead. A pair of second-quarter touchdowns from Hejny made the score 28-0 at the half.

After its offense was shut down in the first half, held to 67 yards — all on the ground — Cooper found success in the second half. In a yeoman effort, running back Ethan Elks finished with 167 yards on 18 carries, most of which came in the second half, including touchdown runs of 40 and 45 yards.

“We knew they were going to score on us eventually,” Buchanan said. “They’re a good team. Good thing we built that big lead.”

However, Cooper could not stop Aledo on defense. They also could not recover any of three onside kick attempts despite being in prime position to do so on all three.

After each recovery, the Bearcats scored twice on touchdown runs of 4 and 6 yards by Davhon Keys, along with a 26-yard field goal from Cole Crawford.

Keys also had a series of clutch defensive plays early in the second quarter when the score was still 14-0. He stopped a run for a gain of only a yard, then knocked down a pass and, after an Aledo punt, he recovered a fumble two plays later on the Cooper 48 that led to a Hejny 3-yard touchdown and a 21-0 advantage.

The final drive leading to Crawford’s field goal consumed seven minutes and 13 seconds, taking the clock down to 27 seconds and squelching any prayer the Pirates had for a miracle finish. It was a stark contrast to the first three periods when Cooper had the ball for more than 23 minutes compared to just over 12 for Aledo.

For a second straight game the Bearcats did not turn the ball over, along with having just one penalty for 5 yards.

“I definitely think we are playing very disciplined football. In the second half we started getting better and we’ve just kept it going in the playoffs,” Hejny said. “Hats off to our offensive line and receivers.”

Class 5A Division I Area Round Playoff