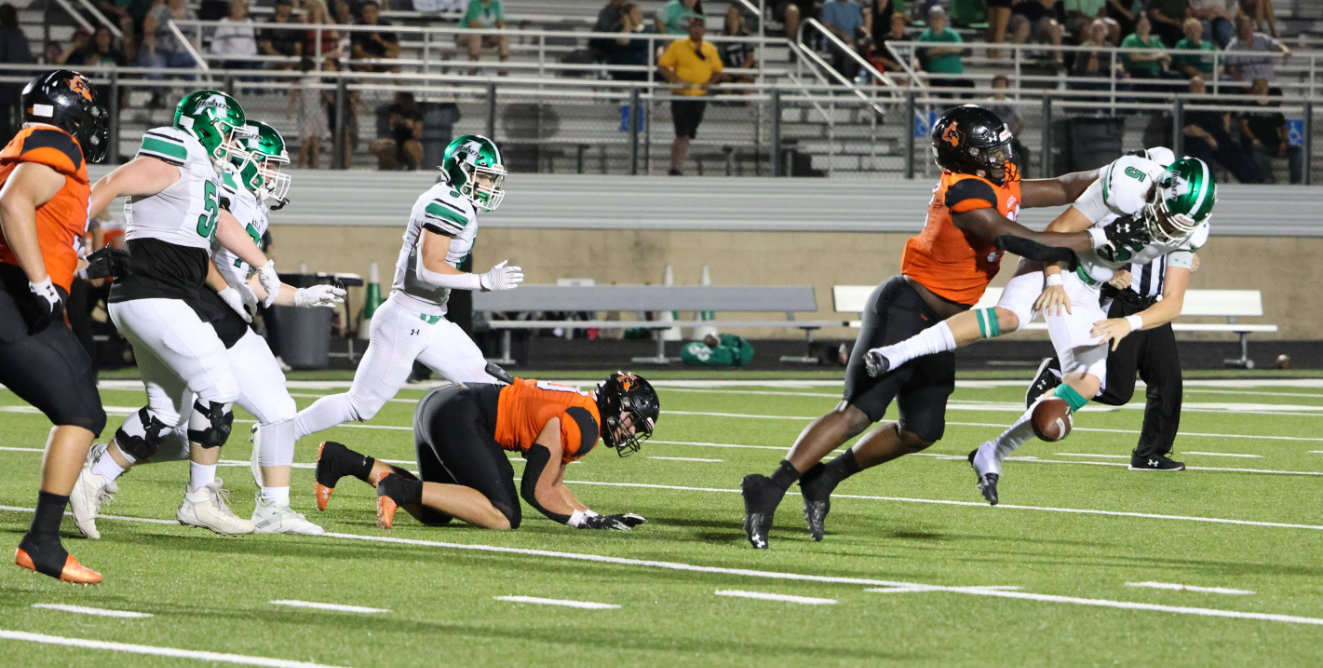 Johnathan Gray is the new running backs coach at his alma mater this season. Earlier in the week, the Aledo legendary running back and national record holder had high praise for Bearcat junior Hawk Patrick-Daniels.

“Hawk is a great runner. I’m really proud of what he’s doing this season,” Gray said.

Patrick-Daniels continued to prove his coach right and must have brought some sweet memories to Gray Friday night as he ran up and down the field at will against Azle in a 55-20 Aledo victory over the visiting Hornets. He finished the night with an unofficial 294 yards on just 24 carries, also scoring three touchdowns.

“I do feel like it’s coming together, better as a team, as a family.”

Patrick-Daniels carried one time for three yards in a season-opening loss at Dallas Parish Episcopal. In Week two, however, he became the spotlight back and has now rushed for a total of 574 yards and seven touchdowns on just 65 carries, an average of almost nine yards per carry.

With the victory, the Bearcats evened their season record at 2-2. More important, Buchanan noted, they remained undefeated in District 3-5A Division I. Azle is still looking for its first win at 0-4 and 0-2 in league play.

Aledo continued its dominance over the Hornets in their series, winning for the eighth consecutive game and having outscored Azle 387-30 in the past seven meetings. The Bearcats lead the all-time series 14-2.

Patrick-Daniels had TD runs of 28, 32 and 38 yards. His first two scores gave the Bearcats a quick 13-0 lead less than four minutes into the game.

Then, after the Hornets silenced the crowd with a 72-yard touchdown pass by quarterback Jay Jones to Tyler Landon, Patrick-Daniels got them roaring again with his third touchdown just more than two minutes later for a 20-7 lead.

By halftime the Bearcats led 34-7 as running back Caleb Pope scored on a 13-yard run and Kaydon Finley caught a 14-yard pass from quarterback Hauss Hejny. Pope would add second-half touchdowns of one and five yards and Finley would catch a second TD, this time from backup QB Brant Hayden for 46 yards.

In all, the Bearcats amassed an official 572 yards of offense, of which 416 came on the ground. In fact, they averaged more than 10 yards on their 43 carries and had 14 rushing plays of 10 or more yards, with 11 coming from Patrick-Daniels.

Finley led the receiving corps with four catches for 89 yards, while tight end Tyson Timms had three catches for 36 yards. Zach Reynolds hauled in two for 15 and Austin Keith caught one for six.

Also for the Aledo defense, linebacker Ben McElree recovered a fumble at the Azle 14-yard line to set up a touchdown.