Exavier Anderson brought the hometown crowd to its feet with a dunk at the end of the first quarter against Weatherford on Nov. 18.
Ryan Wade/The Community News 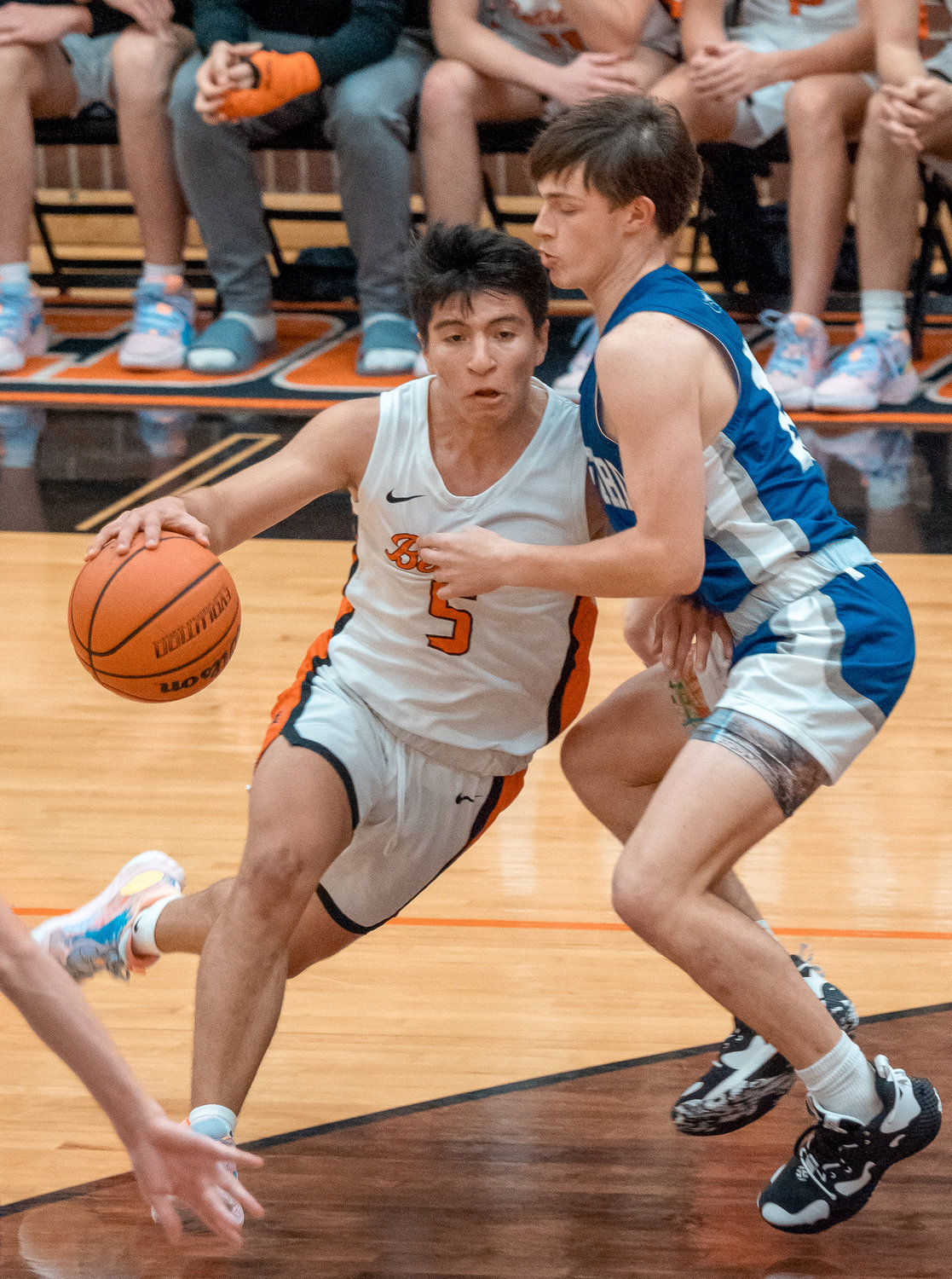 What a difference a week makes.

Following the one-point loss to Crandall in the season opener, Aledo Bearcats head hoops coach, JD Robinson, stressed that his young squad would need to grow up in a hurry this season. Much to Robinson’s delight, that’s exactly what happened in the week between games 1 and 2 of the season as Aledo pulled out a 60-37 victory on Friday night.

“I thought we grew up some tonight. We’ve got to grow up in a hurry,” Robinson said.

Notching the first mark in the win column evened the Bearcats’ record at 1-1 early in the 2022-23 campaign.

“We needed that one,” Robinson said after the game. “We needed to get a win under our belt. We needed to have some success. It was good. We moved the ball well offensively. Defensively, I felt like we were really locked in early on. I think that was the biggest difference for us tonight.”

The Bearcats displayed a vastly improved version of themselves as they dominated the visiting Weatherford Kangaroos in every aspect of the game. In the first half of the game Aledo committed just three fouls through 16 minutes of action while only turning the ball over three times during the same stretch. Both categories were issues for the Bearcats last week against Crandall.

Offensive rebounds were another key issue stemming from the loss to the Pirates that Aledo rectified against the Roos. After converting zero second-chance buckets in the season opener, the Bearcats crashed the offensive boards in game two resulting in four baskets coming from second or third scoring opportunities.

“Our margin of error is really slim,” Robinson stated. “We have to play hard. We have to play smart. We have to play the right way every possession. It’s going to matter for us down the stretch. We over-emphasize that in practice. The guys did a great job of coming in and responding.”

Aledo never trailed during the contest. After failing to convert a basket in their first possession, the Bearcats got on the board just 49 seconds into the game when resident sharpshooter Drew Clock knocked down his first three-pointer of the night to put the home team on the board, 3-0. After the initial score the game got away from the Roos in a hurry as Clock knocked down two more deep threes to lead the Bearcats out to a 16-4 advantage at the end of the first quarter.

The Bearcats followed with a 17-point second quarter. Exavier Anderson put an exclamation point on the first half when he broke loose on a fast break following a turnover by the Roos. All alone on the home end of the hardwood, Anderson threw down a one-handed slam that brought the hometown crowd to its feet and put the home team up by 20 in the waning moments of the first half.

Defensively, Aledo put on a masterclass in the first half, holding Weatherford to single digit scoring as the Bearcats went into the break with a commanding 33-9 advantage.

As the second half got underway Aledo continued to impose their will at both ends of the floor. Brandon Fields initiated the scoring frenzy by knocking down his lone three-pointer of the game to increase the Bearcat lead to 27 with 5:37 left in the third quarter. With 2:04 left in the quarter Aledo extended its lead to 30 with the score at 43-13 after Clock tickled the twine from three-point land for the fourth time on the night. When the third stanza reached its conclusion, the Bearcats held a decisive 45-18 lead.

Anderson kicked off the fourth quarter on a mission with back-to-back buckets in the first 30 seconds of action. Starting off with the ball at the top of the key, he split the defense as he drove hard down the lane before finishing the possession with his second dunk of the contest. Moments later he gave the Bearcats their largest lead of the game as he knocked down a trey from the wing to make the score 50-18 with 7:30 remaining.

With the win securely in hand, Aledo took the opportunity to get several young players some in-game experience throughout the second half. In all, 11 different Bearcats managed to get on the board in the game. Getting his young players live minutes early in the season is of particular emphasis to the head Bearcat.

Free throws were another area of significant improvement for the Bearcats in the second game of the season. In the loss to Crandall last week, Aledo only converted on 50% of free throw attempts. Game 2 was a different story as the Bearcats ended the night going 11-of-15 from the charity stripe.

Clock led the way offensively for Aledo on Friday with 16 points to his credit. He finished with four three-pointers and a two-for-two performance at the line.

Anderson contributed a dozen points to the Bearcat effort, including a pair of dunks, two three-pointers late in the game, and a 2-for-2 night from the stripe.

Ulises Garcia scored six points in the game. Fields and Jack Sawyer each added five points. Brant Tubbs and Zayden Parker finished with four points each. Luke Slabbekoorn, Cohen Christie, Owen Peterson, and Jackson Todd contributed to the offensive effort, as well, with a pair of points each.

The Bearcats added to the win column on Nov. 21, defeating South Hills 87-29. Jack Sawyer led the ‘Cats with 20 points. Owen Peterson and Brandon Fields each had 15, and Anderson was also in double-digits with 12.