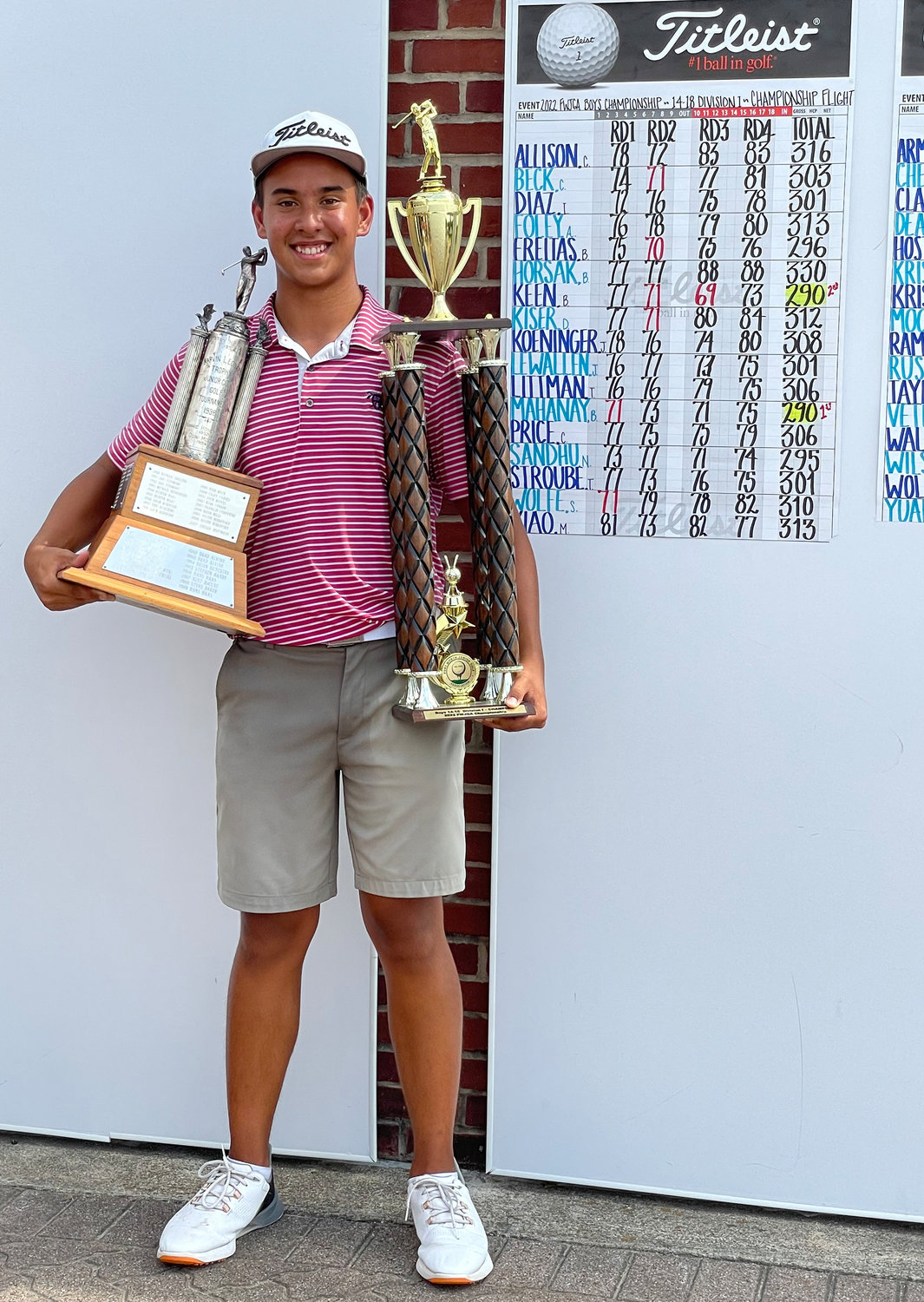 Aledo's Braylon Mahaney holds two trophies after winning the Fort Worth Boys Junior Golf Championship. The one on the right is for winning this year's tournament and the one on the left has the names of every winner since the tournament started in 1936.
Candace Mahaney
Posted Wednesday, July 27, 2022 8:46 am

Going to state was a big confidence booster, for me and the entire team. It was awesome to play with such great players.”
Braylon Mahaney
By Rick Mauch
The Community News

While it was his first Fort Worth Junior Golf championship, the setting had a familiar feel for Aledo senior Braylon Mahaney.

Meanwhile, recent Aledo graduate Aly Saunders placed sixth in the girls tournament, along with bringing home the Wendell Conditt Award for leading after the opening round.

The two had ended regulation tied at 10-over-par 290 following four rounds in the intense heat. Keen had overcome a two-shot deficit entering the final day to force the playoff.

“It was a pretty big bump to win it this year,” said Mahaney, who finished seventh in 2021. “My game is just a lot better this year.”

Mahaney said he got a boost of confidence when he and his fellow Aledo Bearcats advanced to the Class 5A State Golf Tournament in May. On the way to state he and his team bested Keen and Centennial twice, first to win the District 5-5A championship and then at the Region I Tournament, placing third to qualify for state.

“Going to state was a big confidence booster, for me and the entire team. It was awesome to play with such great players,” Mahaney said.

Mahaney shared the tourney lead after an opening round of 1-over-par 71. His second-round 73 left him in the lead alone by a shot, and when he came back with a second 71 he extended that margin to two strokes.

The tournament was played in the midst of one of the hottest summers in Metroplex history. Despite starting at 10 a.m., the temperatures were higher than 100 degrees before each round of 18 holes was finished.

“The good thing is there are a lot of trees out there,” Mahaney said. “I made sure to be under one as much as possible when I wasn’t hitting.”

Mahaney added with a chuckle that, fortunately, he wasn’t hitting from under a tree too often.

Aledo graduate Aly Saunders, who will play for the University of Texas at Tyler in the fall, finished sixth in the Fort Worth Girls Junior Golf …

Saunders, who led the Aledo Ladycats to a state berth this past season as well, is going to play at the University of Texas at Tyler in the fall. She led the Fort Worth Junior after the first round, shooting an even-par 70.

For that performance, she was given the Wendell Conditt Award, which is named after the tournament’s long-time director who retired in 2013 and passed away in 2018.

Saunders followed with a 78 and was in second place after Day 2. She had subsequent rounds of 81 and 88 to finish at 317.

Also competing from Aledo, Ladycat Mallory Miller, a senior, won the second flight in the girls competition. She finished with a four-day total of 355 (88-91-87-89).