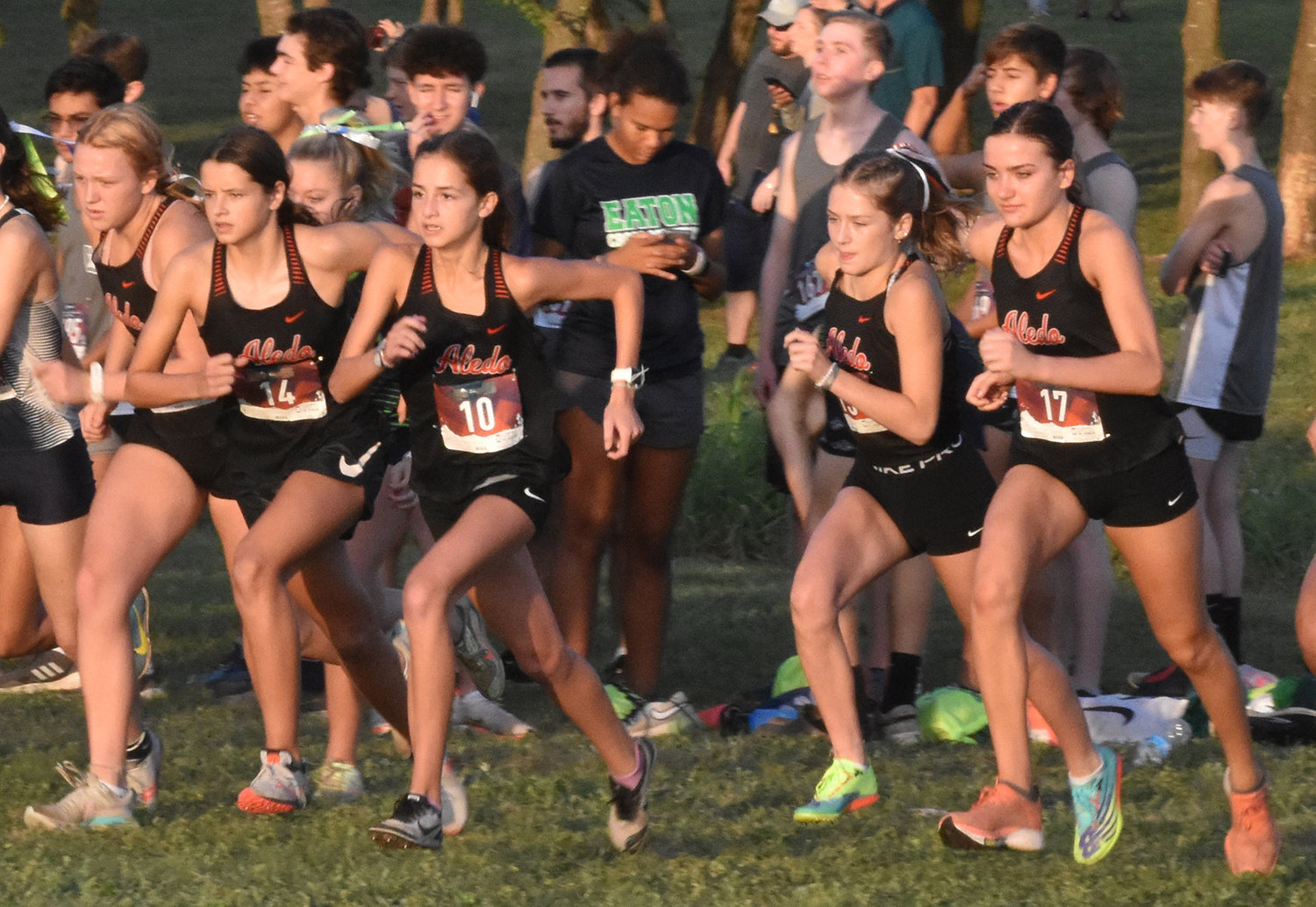 The girls, getting there, seeing the course, that experience is only going to make them better. The boys missed by four points, so I don’t think I’m going to have to remind them of that too much. They know how close they got.”
Aledo Head Coach Mike Pinkerton
By Rick Mauch
The Community News

If you thought this year’s cross country season was a big success for the Aledo program — and it definitely was — coach Mike Pinkerton and his athletes have a message for you.

You ain’t seen nothin’ yet.

The program is losing only two runners from the team that competed at state, and only one from a boys squad that narrowly missed joining them. Oh, and the lone boy who did qualify, Jack Fink, is only a sophomore.

This was the third time in four seasons an entire Aledo team has competed at state. The boys made it there in 2019 and 2021.

Next season the goal is to get both girls and boys running in Round Rock at the 5A State Meet. After all, that part of the state is nice this time of year, and Pinkerton should know as he’s sent a plethora of runners there in the six season he’s been at the Aledo helm (someone every season).

“I’m most certainly going to go into the season with that being the goal,” he said, adding, “and to make some noise.

“The girls, getting there, seeing the course, that experience is only going to make them better. The boys missed by four points, so I don’t think I’m going to have to remind them of that too much. They know how close they got.”

Griffin posted a career-best time of 19 minutes, 11.1 seconds to place 21st at state. Garrison led the contingent at regionals, clocking a time of 18:30.3 for second place, one of three Ladycats to break into the top 15 (Brandenburg 11th, Griffin 13th).

“I knew it was my last race of the season and I was just running as fast as I could,” Griffin said of state. “It was so amazing to compete with friends at state.”

As for her performance at regionals, district champion Garrison said, “I went in and didn’t expect to be top five. It took a lot of pressure off having my friends there.

“I didn’t really know it (qualifying for state) was going to happen as a team, with our workouts our season just kept getting better and better. When our fifth runner, Aubrey, started PR’ing (personal record) a lot, I felt we were a solid team.”

Connally saw her times consistently drop throughout September en route to a 15th-place at district.

“It was really cool to see the girls come together as a team at the right time of the season,” Connally said, adding of the impact of the four freshmen, “They already had running experience, but getting to show them the tradition of the program was great.”

Connally believes the performance of the girls team this season bodes well for more girls joining the program in the future.

“I think it’s talked about a lot more. Hopefully it takes off after this year,” she said. “And I would not be surprised if we got back to state next year as a team. I could see us placing at state.”

Brandenburg, who was second at district, said she could see something special coming together as the season progressed.

“Throughout the season we saw what we were doing, and when we had a pretty good showing at Granbury, I knew we had a chance for something special,” she said.

She admitted, though, that competing on the highest stage at state, was “scary.”

“There were so many older and faster people. In the beginning of the race I kinda forgot I was racing, kind of like fever dreamish. Then I woke up,” she said.

Fink was 32nd at state and 13th at regionals and is already looking forward to another trip, but this time once again with his teammates — which was the case in 2021.

“To get back as an individual was really exciting. I feel like I’m on the right track for college. It says I can do things on my own, but it would have been nice to have my teammates there, and that’s the plan for next season,” he said.

The lone senior for the girls who ran at district, Tillotson, placed sixth. Lewis joined the Ladycats at regionals and state.

Zedler leaves the program having made two trips to state with the team in 2019 and 2021.

“These seniors have done a tremendous job pulling people along. We’re going to miss them,” Pinkerton said. “Unfortunately, we can’t keep a fifth-year senior. If we could, we sure would.”

Should they accomplish the goal of both boys and girls getting to state next season, Brandenburg said, “Oh, that would be so much fun! We had so much fun competing together at regionals.”

At which point, Fink chimed in, “I’ll do my part!”