Local news from the heart of East Parker County
Log in
Where are they now?

John Duke heads to Chicago to cook at Galit 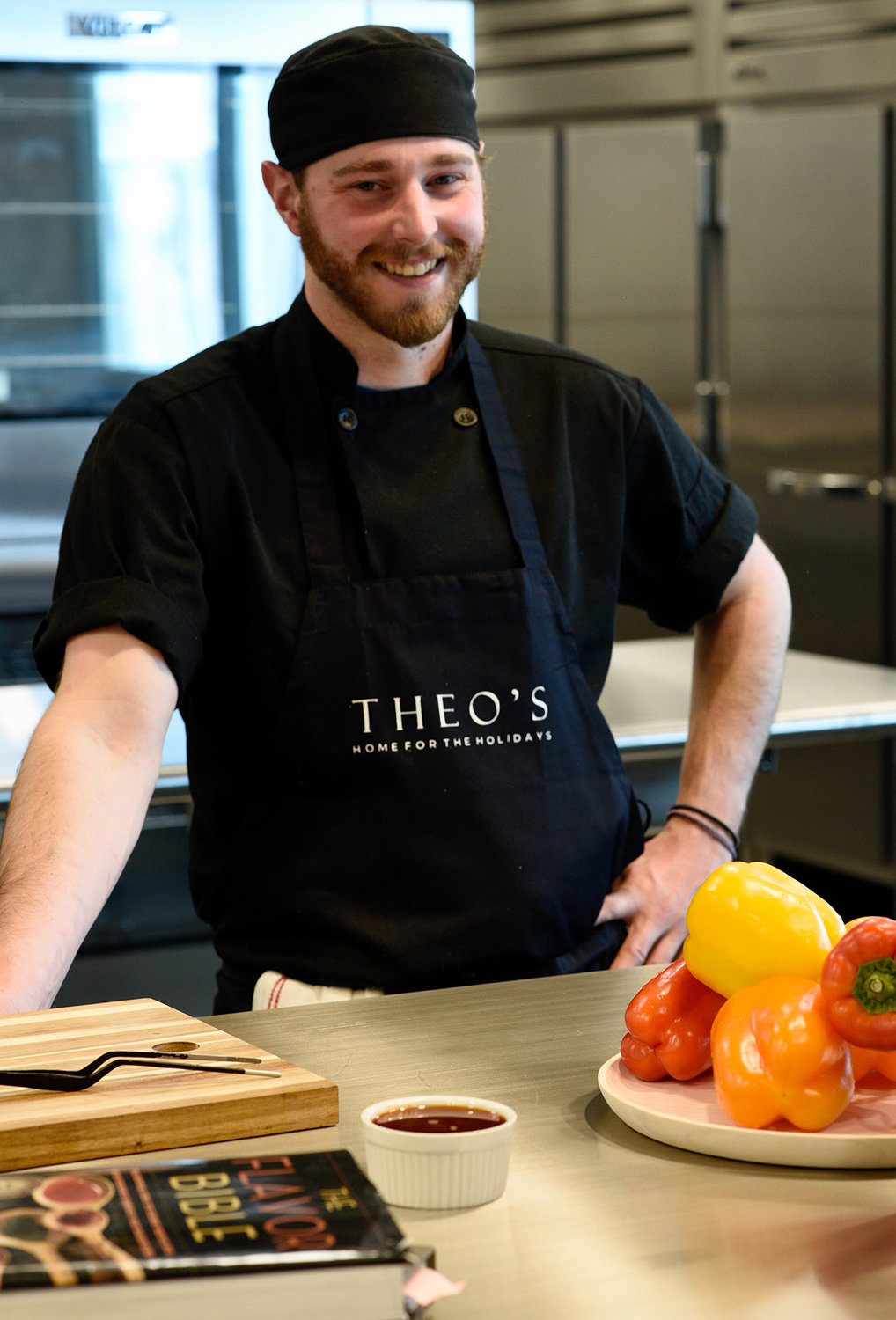 When John (Alex) Duke graduated from Aledo High School in 2013, he never dreamed he might spend his career in commercial kitchens.

But at the age of 27 he found himself in the position of executive chef at two upscale restaurants in Arkansas, and now he is taking that career line toward new opportunities.

His original plan out of high school was to go to Texas Wesleyan University because he wanted to go to Wesleyan (now Texas A&M) Law School. His career objectives changed during that first year at Wesleyan, however, and he decided to make a change.

“I had a whole bunch of buddies who were enrolled in Arkansas, and was still very close with them at the time, and they were texting me like ‘You need to come up here,’” Duke said.

So he transferred to the University of Arkansas his second year with a major track in public health.

“I got into my head that I was going to try to be like a care flight paramedic and it was going to be public health and then go through the whole EMT and the paramedic training,” he said.

But a class he took in his senior year led him to the conclusion that being a paramedic was not a good fit.

So how did he end up in the kitchen?

During his second year in Fayetteville he was running and he saw a sign that a local restaurant, Grubs, was hiring.

“I texted my roommate Preston at the time and I was like, ‘Dude, they're hiring — this would be so easy. Let's go work there!’”

The two roommates did a tandem interview and they were both hired. Preston didn’t stay very long, but Duke found himself running the line in the kitchen three or four months later after his boss had been fired.

“It was a bar and grill in a college town. It was a lot of fun,” Duke said. “But yeah, three or four months in I'm running the line of this stupid busy Dickson Street bar and grill at game season for the University of Arkansas football team. That place feels like a fever dream almost. It feels like it was a war zone. But as far as cooking goes, it helped me find some patience; you know, if I can deal with that I can deal with about anything.”

While still a student at UA very early in his cooking career he found himself pushing out hundreds of burgers a day for three years.

As the time came for his collegiate career to end, Duke felt he could do what he was doing on a finer dining level, and applied at some restaurants. He was hired by Theo’s, described as “Upscale New American plates served in a clubby atmosphere” on Google.

“At the time Theo's and Bordinos were the quote-unquote fine dining places on Dickson Street in Fayetteville, which is the main bar street,” Duke said. “That's where everybody goes to eat and drink.” 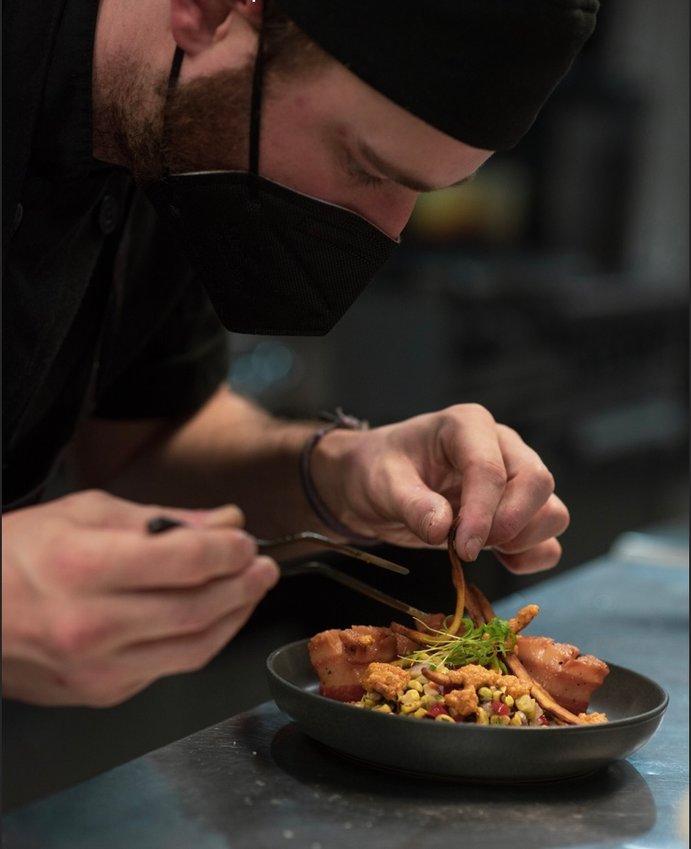 Theo’s started Duke out on salads. Because he had experience, the chef who hired him put him on a fast track.

“The natural progression is you start on salads. You go to appetizers or just starters like holdups and desserts,” he said.

Duke went straight from salads to sauté, and said once you are ready, “they put you on grill to where you're working with the high-dollar protein — if you mess up you're getting in trouble.

“I was never really yelled at by my chefs. Number one, they were all great. Number two, I think they could tell I was beating myself up whenever I did mess up more than they ever possibly could,” he said.

After nine months at Theo’s in Fayetteville, Duke was named sous chef at the Theo’s location in Rogers, Arkansas. Sous chefs are called upon to support executive chefs and represent them in their absence. The sous chef often is the one responsible for training new staff members and managing the team. They must be able to think on their feet, make sound snap decisions, and come up with creative concepts for the restaurant.

Duke found a job at a restaurant inside of a brewery to wait out COVID.

“Yeah, I was flipping burgers. I was making corn dogs, but you know, we were getting boo-koo in tips every day, so I didn't really mind it,” he said.

He was called back to Theo’s when things opened back up. There was a challenge in that the owner had filed bankruptcy and the company underwent an ownership change, but no one had tended to the contents of the coolers. Duke and his sous chef spent most of August and September of 2020 throwing out old food and scrubbing coolers and kitchens before reopening the restaurant.

After two years of being head chef at Rogers, in January of 2022, at the age of 27, Duke became executive chef of both Theo’s locations.

But now he has decided to seek new opportunities. 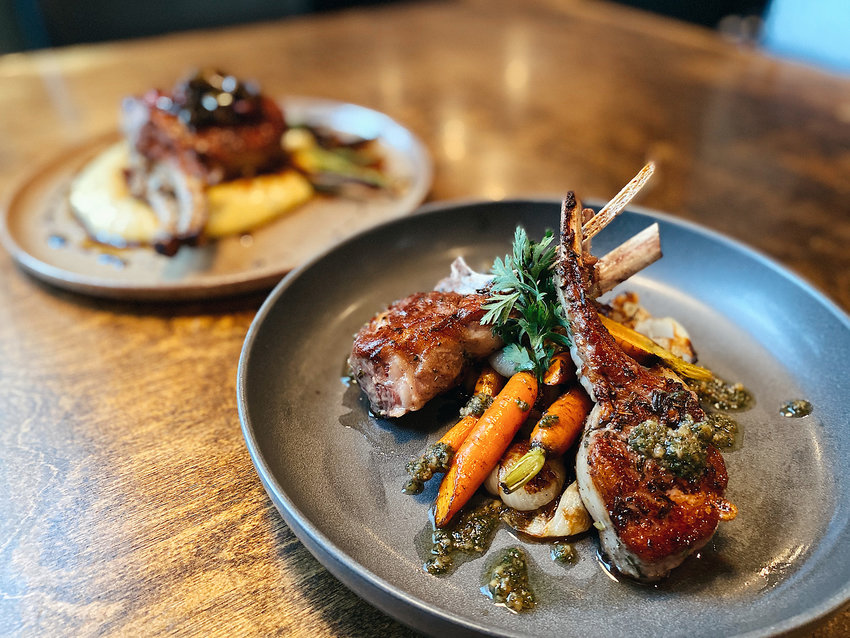 Duke had done “staging” in Chicago on a number of occasions during his time as a chef. Pronounced “STAZH-ing,” staging is defined as “an unpaid internship test when a cook or chef works briefly for free (or to gain a position) in another chef's kitchen to learn and be exposed to new techniques and cuisines.”

“Legally, you can only keep people for like two hours,” Duke said, “but I was working like a full 40 hours a week at a time. I was there for three days and I worked 12 hour days all the time. But that's because I just enjoy the work.”

A new opportunity came his way in Chicago at an upscale restaurant called “Galit” run by executive chef Zach Engel.

In addition to the talents of the chef, Duke was impressed by the operation of the restaurant as well.

“Galit was amazing food-wise, and it was spotlessly clean,” Duke said. “It was organized, the food was great, but what really caught my eye was the way that everything was just absolutely structured out — it was just regimented and everybody was moving like a machine and that's what caught my attention.”

Duke said even the interview process was buttoned down. His responses to interview questions were immediately entered into a Google document for future review.

Duke experienced a somewhat surreal moment during his interview with Engel and his Chef de Cuisine Tom Carlin. Carlin was called away for a phone call while Engel continued to interview Duke. Carlin came back to the interview with a huge grin on his face, telling Engel that the restaurant had earned a Michelin Star (a Michelin Star is described as “the ultimate hallmark of culinary excellence”).

“So here I am hugging these two chefs that I've known for about five minutes as hard as I can. ‘Congrats guys, that's awesome!’ Yeah. And then we had to sit down and pretend like we weren’t buzzing and going crazy and continue with this interview. So that in itself was just kind of wild,” Duke said.

Everything in the interviewing and the staging at Galit cemented Duke’s wish to go to Chicago. Duke’s thought process was “I would really like to work here. I'd like to learn from these people. I'd like to start making my bones in Chicago at this restaurant.”

Duke started at Galit earlier this month, moving from executive chef at Theo’s back to line cook at Galit. At 27, as an executive chef, Duke had no one to learn from, and he sees the step down in title as part of his education.

“This is this is definitely a step down from what I was doing but I'm a-okay with it,” Duke said. “At this point in my career, I think it would be so much more valuable if I was learning from somebody, working on getting better, and having an instructor telling me what to do rather than trying to figure it out myself.” 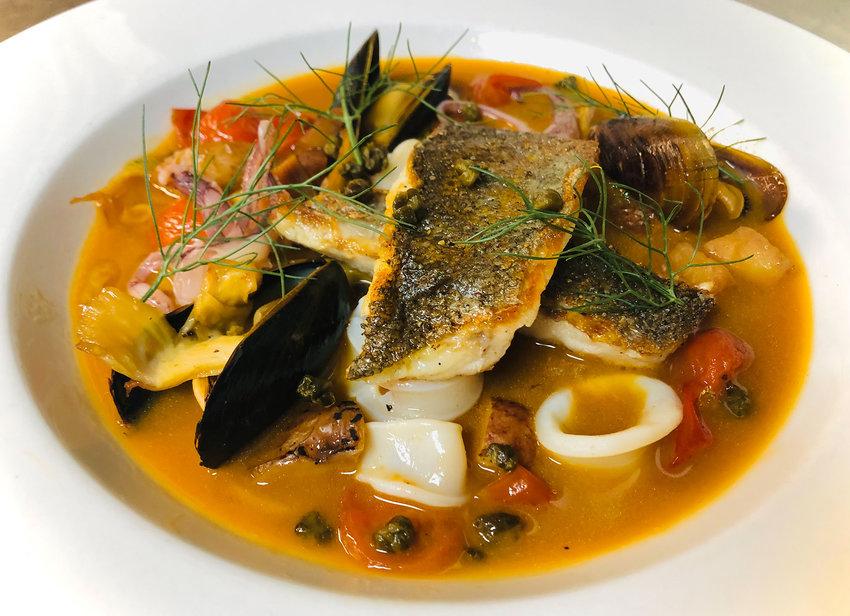 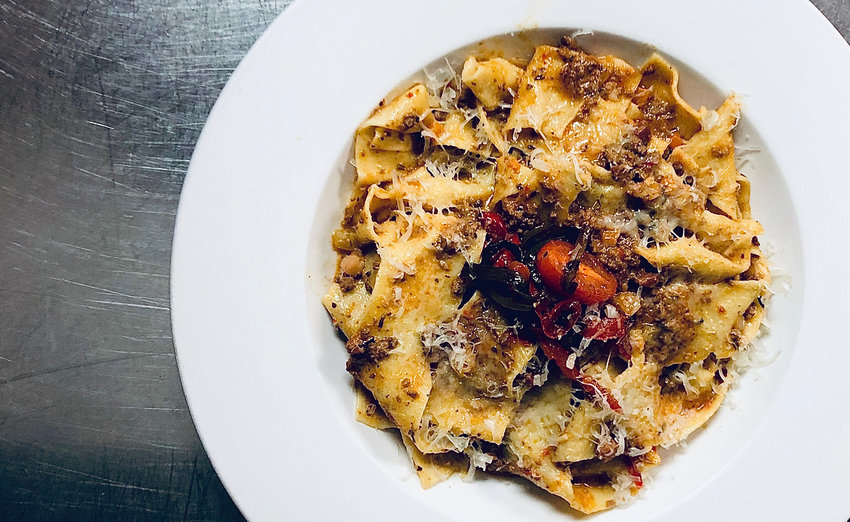 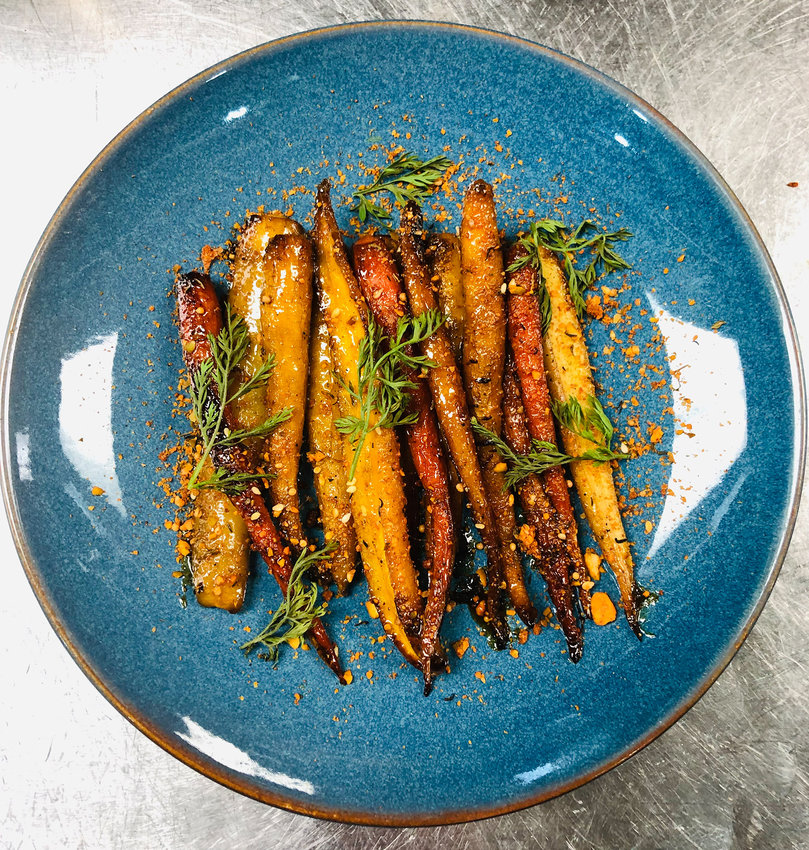 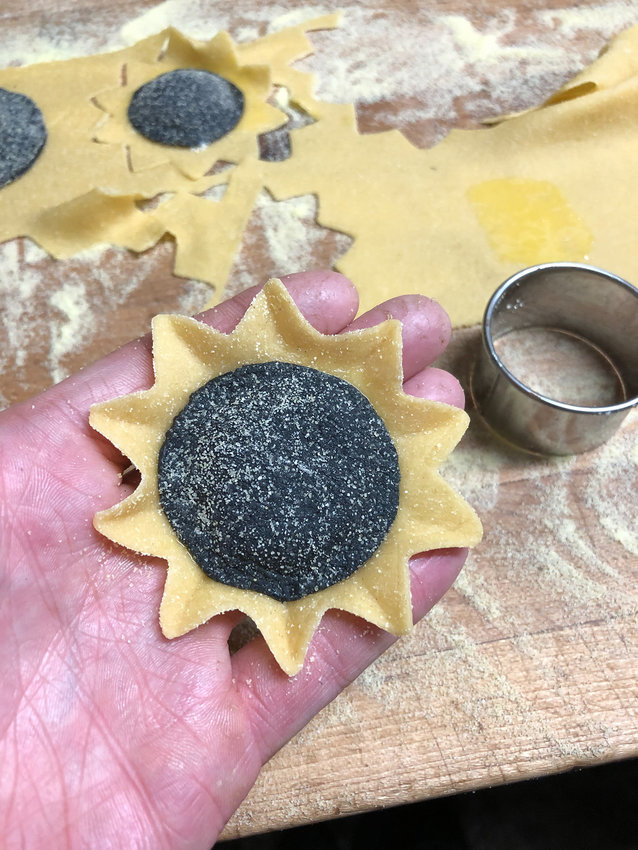 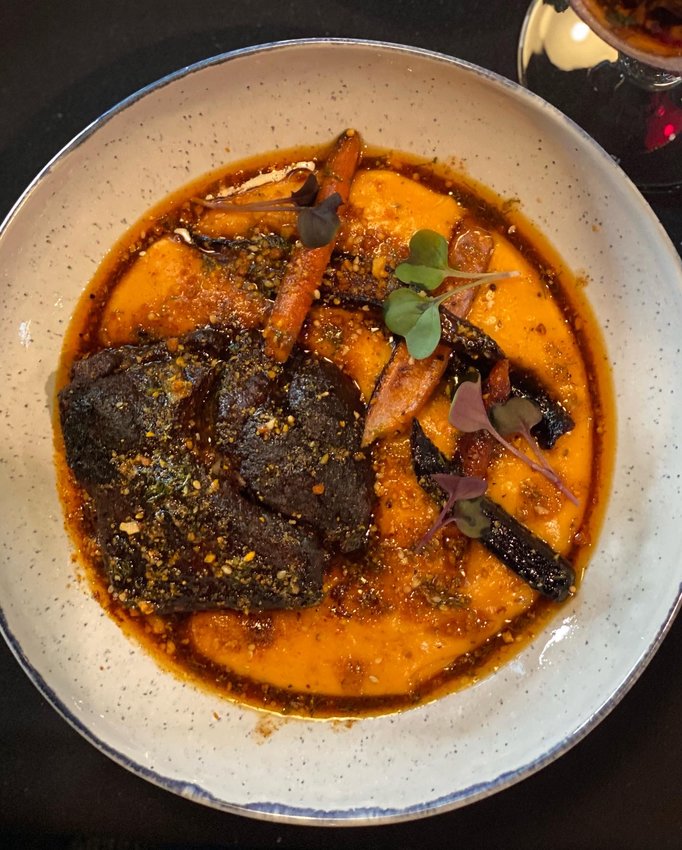 At the time Duke left Theo’s, every dish on the menu was one of his creations. However, when asked if he had a “signature” dish, one particular creation stood out in his mind.

One of the important parts of the job of executive chef is nailing down recipes and procedures so they can be replicated, but to Duke that is also one of the most annoying parts of the job because it removes spontaneity.

“I feel like when you're trying to write down a recipe, there's so much less of just cooking with feeling or heart,” Duke said. “You know, putting a dash of this in there, tasting it, seeing if you need some more — to where it is regimented so people can copy — it takes away from what got me into cooking in the first place, which is creating something on the spot, from the heart.”

Duke thinks one of his most inspired creations is a braised lamb shoulder.

“I think lamb is probably my favorite protein to work with,” he said. The lamb shoulder “was braised in a lot of red onions, a lot of garlic. It was garam masala, cumin, coriander, brown sugar, and paprika for the most part, but it came with some smoked carrots, and a sweet potato aligot.”

“We got more compliments on that dish than I think we got on anything else. Whenever I'm trying to make a dish, I want the flavors in your mouth to kind of bing-bang-pow you know, it's like you're experiencing a whole bunch of different stuff on your tongue, and you’re asking ‘how is this happening?’ That's the reaction I want to get,” he said.

Down the road Duke is not sure where he wants to end up, but it might take the form of his own restaurant or restaurants.

“I would like to have my own restaurant or restaurants but 'm not really on a time limit. I'm not giving myself a set date,” Duke said. “I'm going to try to learn what either I think I want to or I think I need to, then once I feel like I've got enough experience and cooking knowledge under my belt, I'll go and see what's available.”

He summed up his thoughts with wisdom that could apply to anyone.

For Duke, it’s clear he has both.