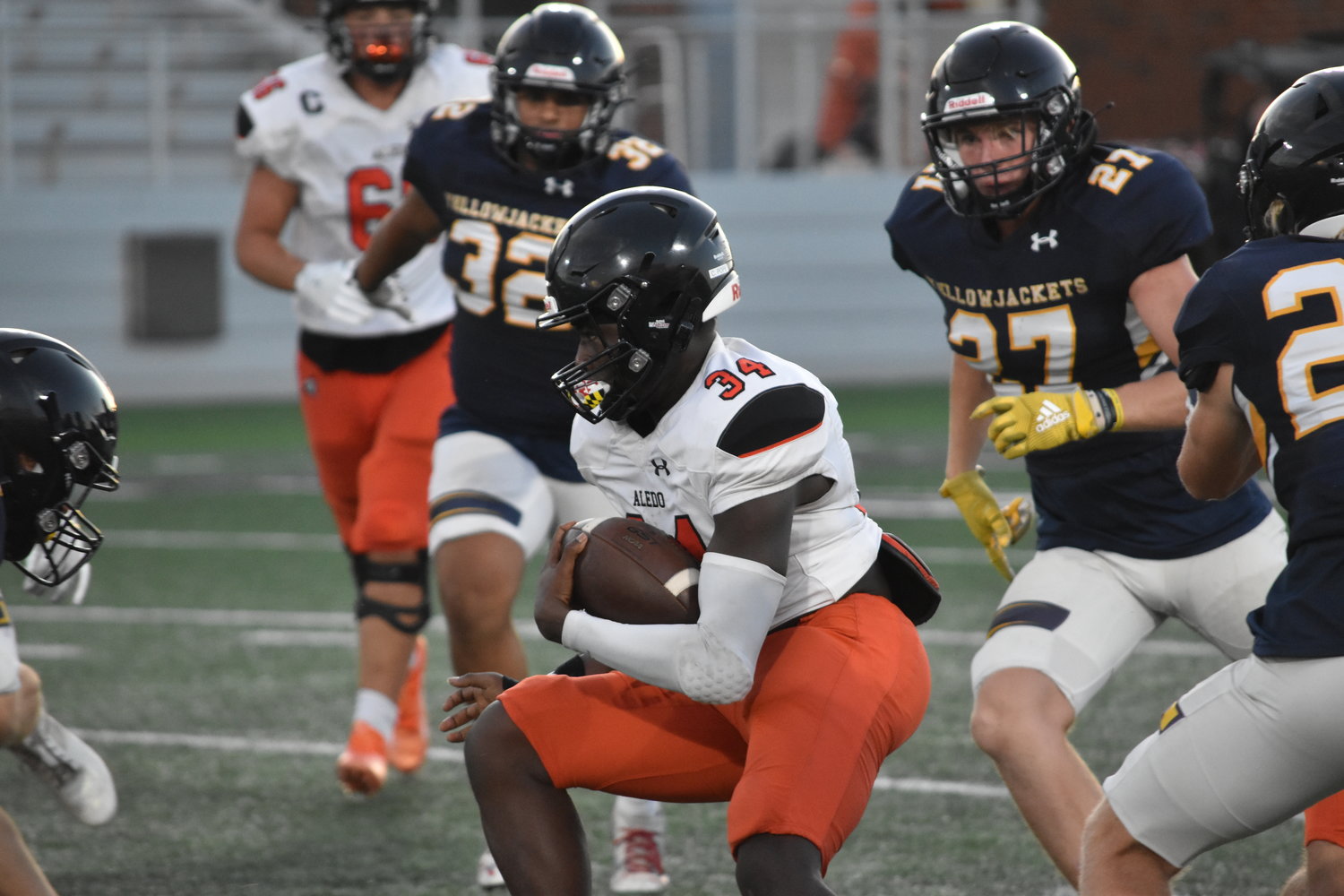 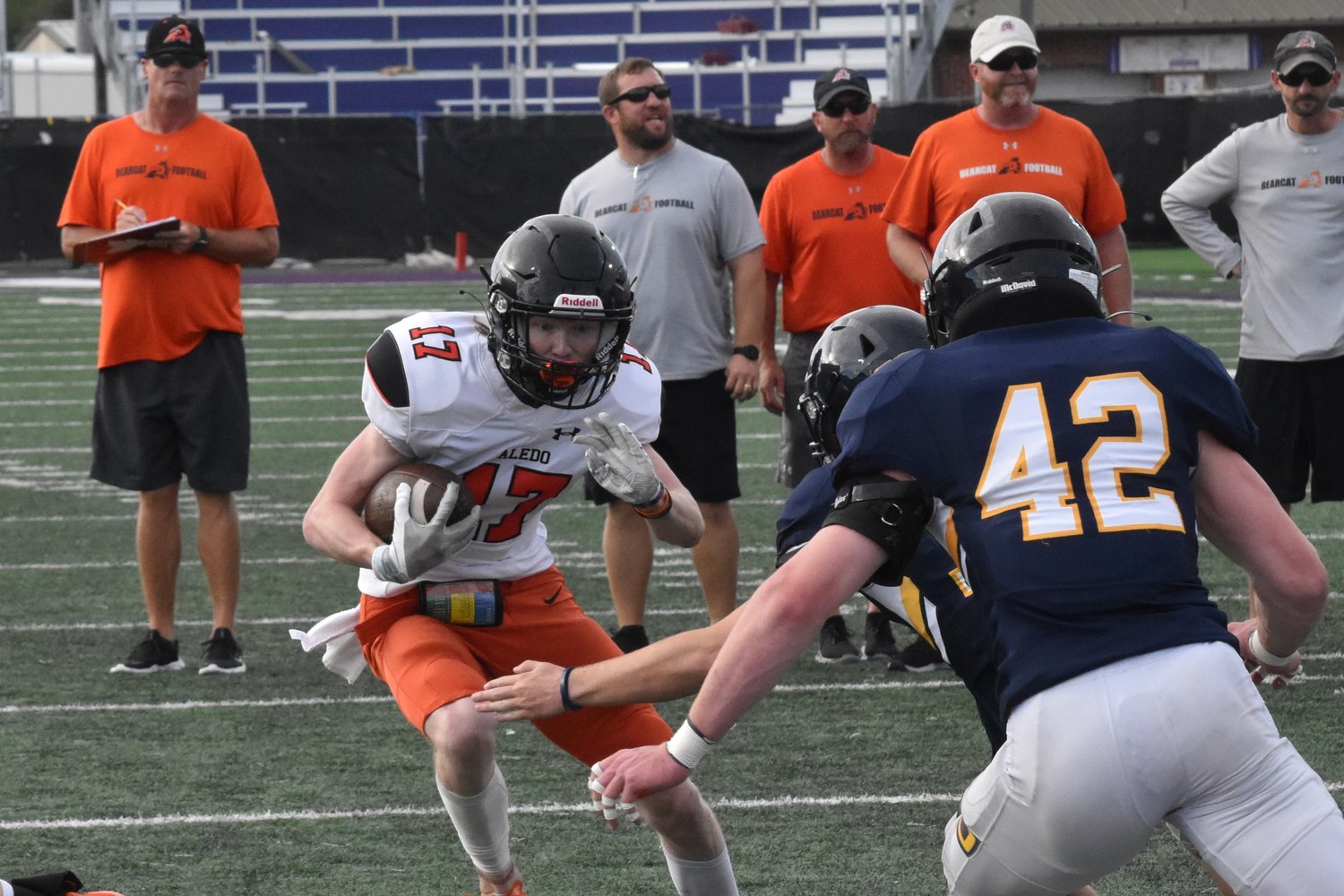 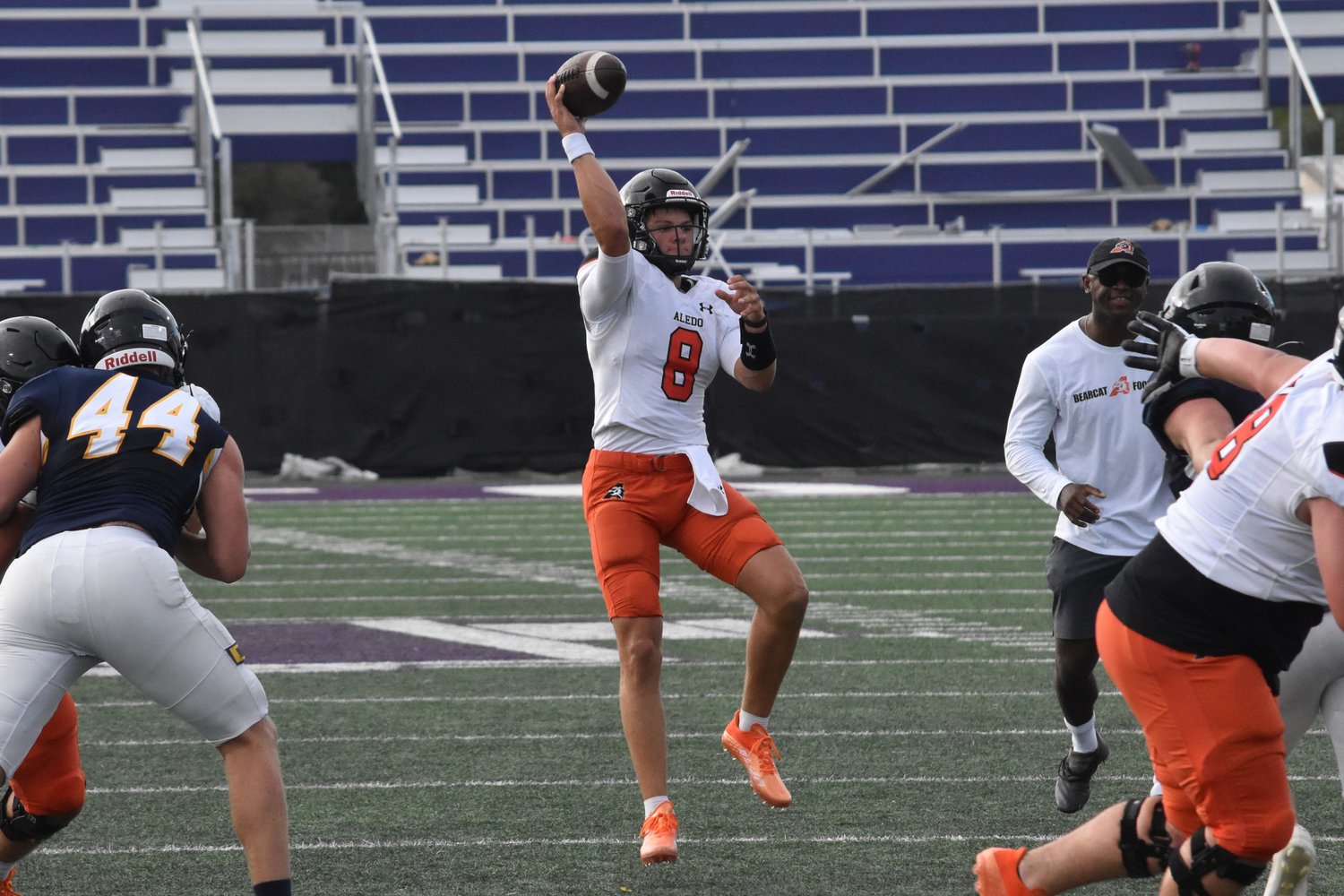 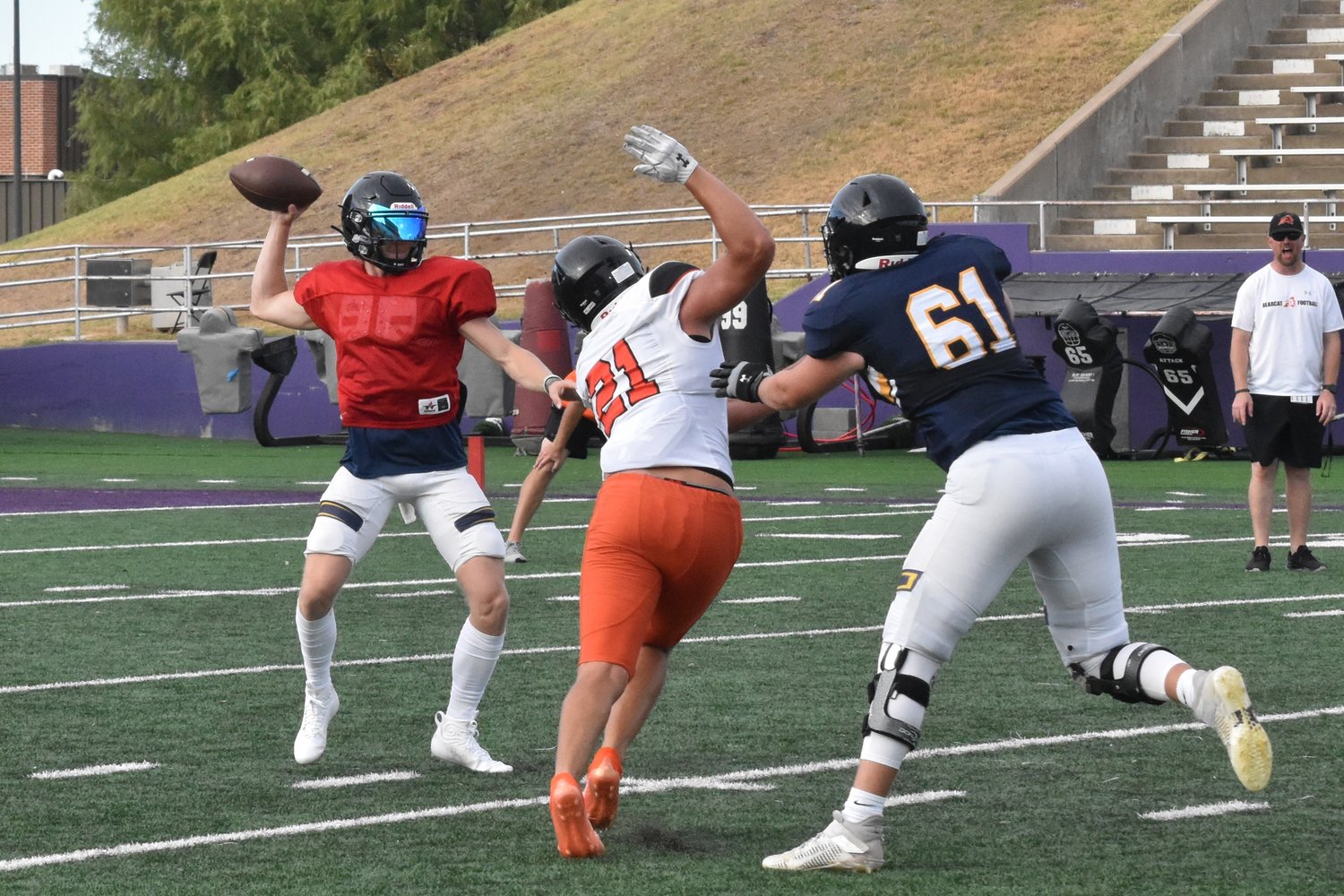 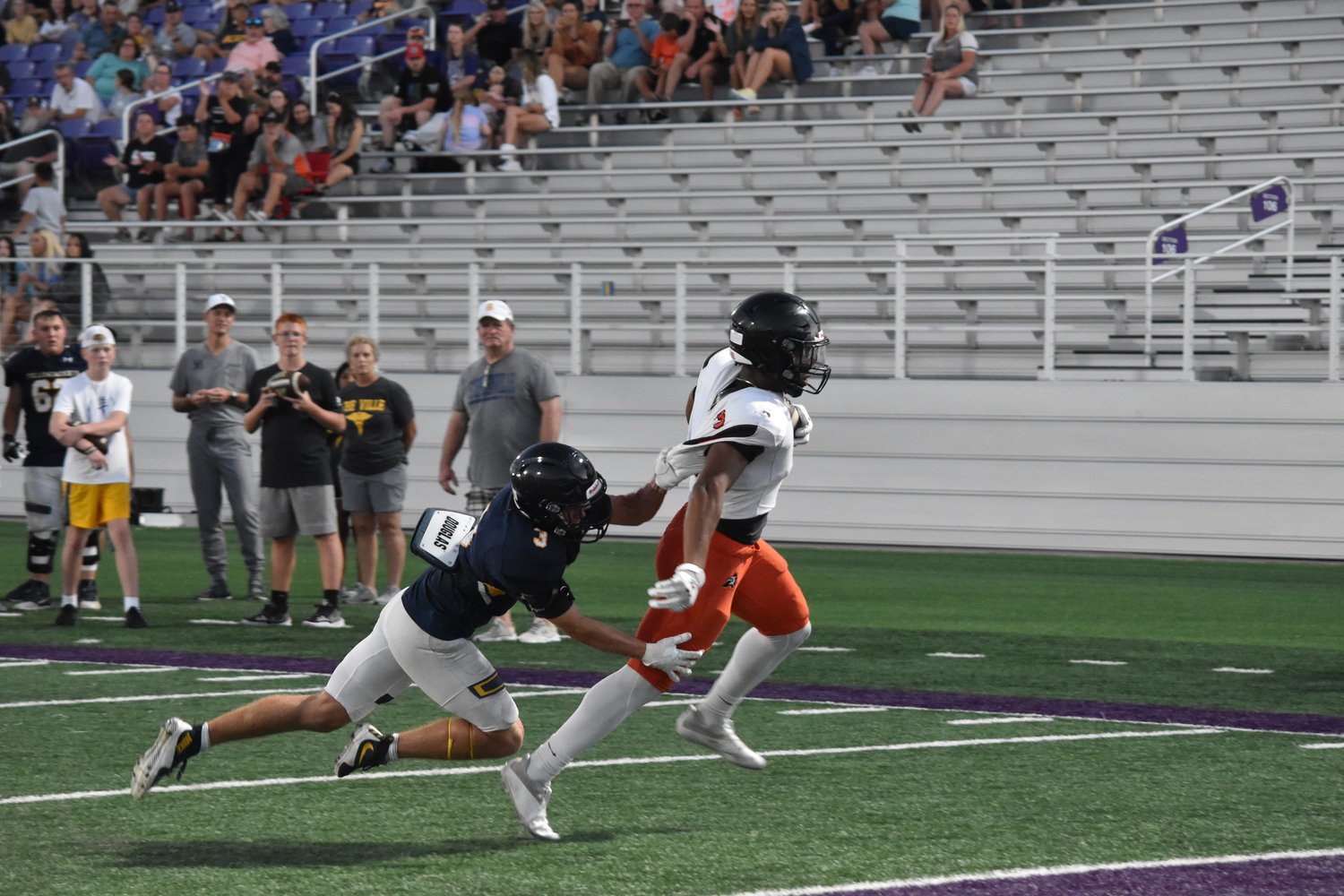 Dahvon Keys sheds a tackle and scores a touchdown
Nolan Ruth / The Community News
Previous Next
Posted Friday, August 19, 2022 1:04 am

The last time the Aledo Bearcats football team met the Stephenville Yellow Jackets in a varsity setting, it was 2013 and Aledo defeated its long-time rival 56-14 at Bearcat Stadium on their way to a fifth state title, and a season in which they scored 1,023 points.

In the past nine years, the former archrivals have consistently been among the best teams in the state in their respective classifications without ever facing each other. However, on Thursday, Aug. 18 at Memorial Stadium in Stephenville, the two faced off for a preseason scrimmage that had many remembering the rivalry that once was.

The scrimmage started off with practice-style possessions with coaches and substitutions standing ten yards behind the line of scrimmage during plays.

Aledo had the ball first and immediately went on a drive that ended with a Hauss Hejny touchdown pass to Zach Reynolds on fourth and goal from the 14 yard line. On the very next play, Hejny hit Kaydon Finley for a 75 yard touchdown pass.

Despite the success of his offense, four false start penalties hindered Aledo during their drives.

“We had some mental mistakes that are uncharacteristic of us,” Buchanan said. “We’ve got to work on our discipline. That’s the bottom line tonight. We have got to be more disciplined.”

The defense did its job all night, keeping Stephenville out of the end zone during the practice-style portion of the scrimmage. Junior cornerback Chris Johnson came up with an interception early in the Yellow Jacket drive, while Davhon Keys and Jake Gillespie locked down the run on the strong side.

Gillespie made a return to his former home where his father, Joseph Gillespie, current defensive coordinator at TCU, led the Jackets to a state title in 2012.

“It was nostalgic,” Gillespie exclaimed. “It was fun playing against all my old buddies. It was good to see them again, but I can’t hold anything back. It was weird to see all of them playing against me. I thought years ago I would be playing with them but I wouldn’t want to be anywhere else than Aledo.”

After the practice-style period ended, the teams played two live 12-minute halves with a running clock. For Aledo, it was the first true action all season, but Stephenville was in the same position the week before against Glen Rose.

It was an inauspicious start to the live portion for Aledo as a fumble on the first drive set up Stephenville on the Aledo 36 yard line. Six plays later, the Yellow Jackets scored on a touchdown pass to take a 7-0 lead.

However Aledo’s next drive embodied everything the team had been working on over the past two weeks. Running backs Ryan Cox and Caleb Pope led the charge in getting the Bearcats to the Stephenville six yard line. Facing fourth and one, Keys came into the game at running back and broke to the outside, scoring to tie it up at seven.

The defense went right back to work, forcing a Stephenville three-and-out. Aledo appeared to be on the verge of scoring again, but time expired and, despite a defensive penalty on the final play, the coaches decided to call it, ending the scrimmage in a 7-7 tie.

As it stands, the two teams plan to scrimmage again in 2023 at Bearcat Stadium, although that is subject to change over the next year.