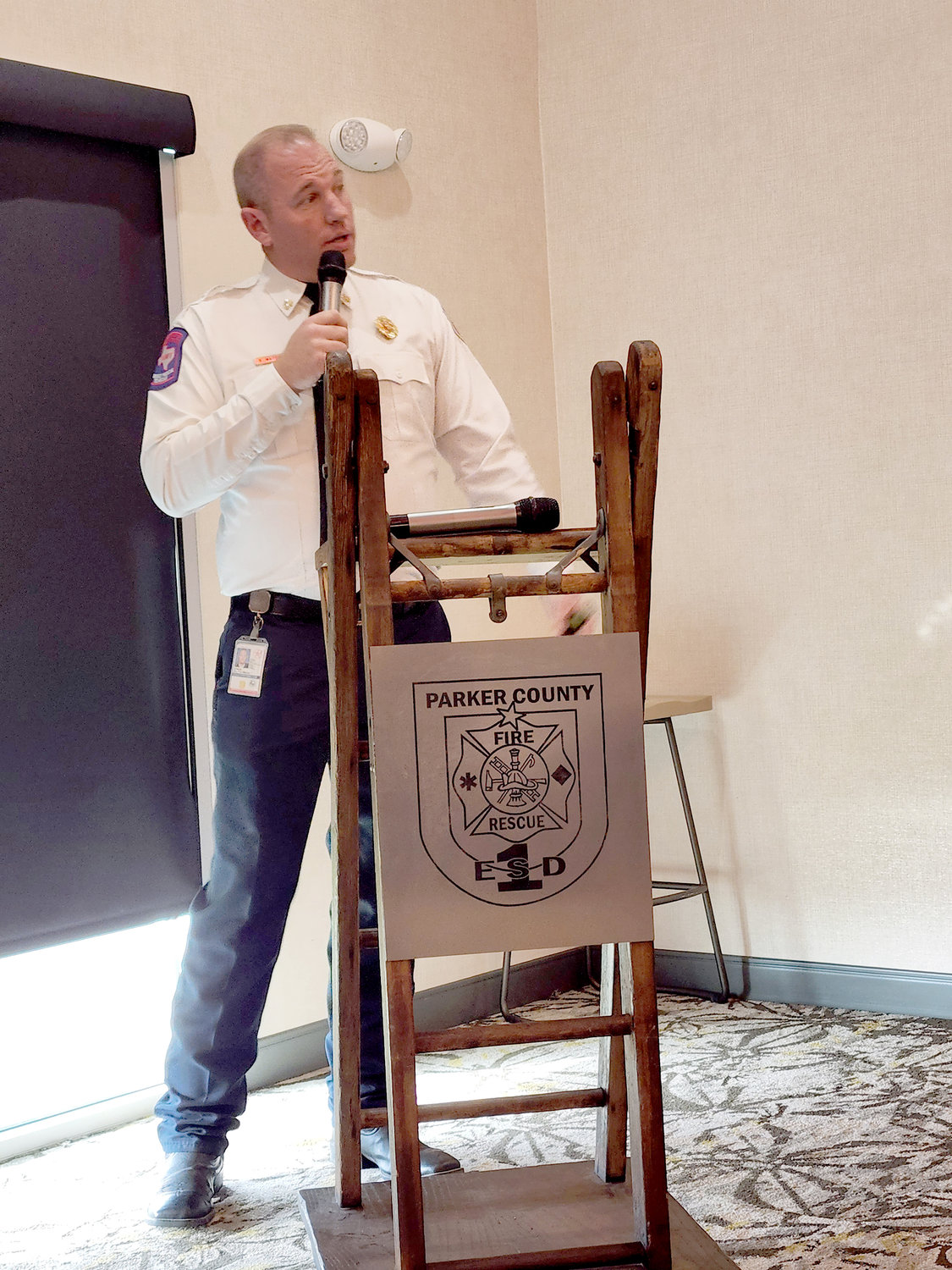 If there was ever a question about how popular the fire department is in Willow Park, there should be none anymore.

With the possible annexation of their department into the Parker County Emergency Services District 1 pending with a Nov. 8 election, several citizens spoke in opposition to such a move at a public hearing on Aug. 17 at Spring Hill Suites in Willow Park. Several others from the county also spoke in defense.

Many questions were asked by the public and answered by both ESD1 Fire Chief Stephen Watson and Willow Park City Manager Bryan Grimes.

Then, the ESD1 board of directors voted 5-0 to call for the November election.

Among those from the public who spoke, eight oppose the annexation, four were in favor and a couple didn't seem to care one way or the other, but nonetheless had questions.

Among the major complaints were that the citizens have not been given enough notice or information about the subject of annexation. Some even suggested deals are being made behind closed doors, which Willow Park Mayor Doyle Moss immediately refuted.

"This was not cloak-and-dagger, these meetings we had with firemen, with ESD and now it's being brought to the people," Moss said. "We are entertaining this for the betterment of our city."

Just as he did at the Aug. 9 Willow Park City Council meeting, Watson assured citizens of many things, including that a fire station will remain in Willow Park and that all of the current employees would retain their jobs at the same pay rate with even better benefits, including the district paying 100% of the insurance costs for an employee and their family.

And that the city's prized ladder truck will stay put, as will all equipment needed to operate a fire station in Willow Park.

Citizen Dale Lewis called into question the fire station remaining, asking what happens if the quickly growing northern part of Parker County adds around 20,000 homes. Watson told him and the rest of the audience that two new stations are already in the planning for that part of the county — with a reminder that Willow Park, already the second largest city in the county, and the rest of East Parker County is also rapidly growing.

"We put our resources into where the growth is. Look around here, there is tremendous growth," Watson said. "Absolutely, without fail, there has to be a fire station in Willow Park."

In fact, Watson even discussed the potential for increasing the fire department staff in Willow Park should the annexation go through.

The reason the annexation is being discussed is simple. Willow Park is busting at the seams budget-wise. All $1.9 million expected to be brought in from property taxes in the coming year's city budget is expected to go to fund the police department. The fire department will take up $1.4 million of the expected $1.7 million income from sales tax.

That doesn't leave much wiggle room for projects such as streets, parks, etc.

"That puts a tremendous strain and pressure on our budget," Grimes said, noting the fire department budget has grown 60% since 2017.

If the fire department is annexed into ESD1 it will no longer be funded by the city, clearing up that part of the budget for other projects. For ESD1, Watson said it is a strategic move to streamline services throughout the county with everyone working for the same agency.

ESD1 covers 311 square miles and 70,000 residents, Watson said. This includes Aledo, the Annettas, Springtown, Peaster, Poolville, Morningstar, Silver Creek, and Lajunta. They are funded by a 1.5% sales tax in unincorporated areas and an ad-valorem (property) tax of up to 10 cents per $100 in incorporated areas such as Willow Park.

Should the WPFD join ESD1, citizens would have to pay the ad-valorem tax. However, that would be offset by a reduction in their current taxes that would actually decrease their payments by about $40 per every $100,000, Grimes said.

"If you take $1.4 million out of our budget, there will be a tax reduction," Grimes said. 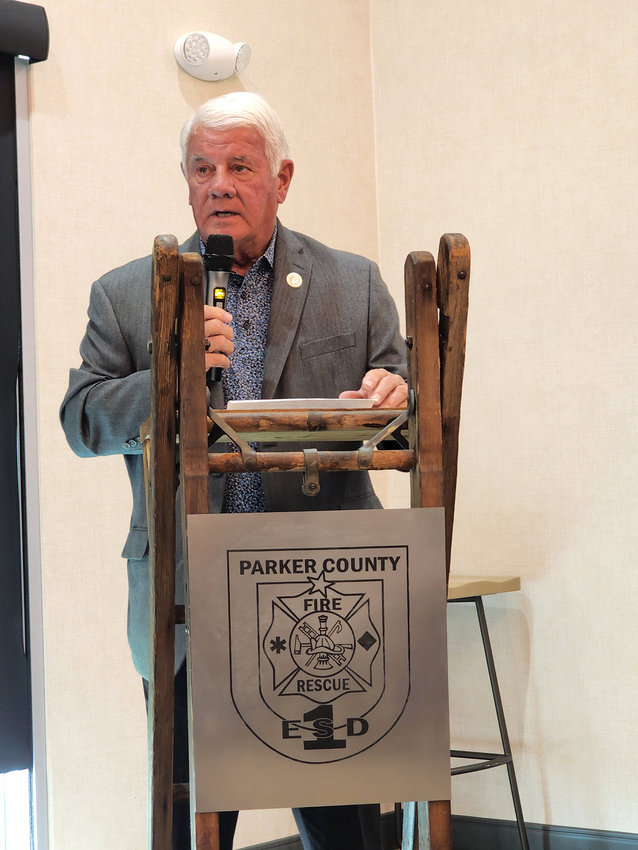 ESD1 President Mark Jack issued a reminder that nothing is set, that the issue still has to be voted on by the residents of Willow Park and the others in ESD1. First, Willow Park residents will vote to approve or disapprove the annexation, and if they approve the other residents of ESD1 will vote whether or not to accept them, Jack said.

Grimes told the crowd, "If the situation is status quo on Nov. 9, we'll still make it work. The city will have a fire department."

However, Grimes added, if the city were to fund the fire department out of property taxes — which several citizens said they prefer to the annexation — the tax would be increased to around 80 cents per $100 for fire, police and debt.

"If you want to raise my taxes to justify it, do it," Dale Lewis said. "Just say, 'If you want a fire department, here is what it's going to cost you."

Several of those who spoke in favor of increased taxes are senior citizens, whose property tax rate freezes at whatever the rate is when you turn 65. Grimes reminded them that no one is currently funding the fire department from property taxes as it is solely funded by sales taxes.

Michael Hogue raised the question of what happens to the public safety building, which was built with bond money, stating, "We've got a big liability there, and I'd like to know what we're going to do about it?"

Watson answered that discussions are ongoing concerning the building, which also houses the police department, but assured folks that the fire station, whether still there or in another location, is not leaving town.

Grimes added that the city is currently getting appraisals on both the public safety building and city hall, a possible choice for relocation of the department. If that is the case, then city hall would have to move, perhaps to an entirely new location or simply switch places with the fire department.

"They provide outreach and training to the community. At every single event our Willow Park Fire Department is there. Even just driving through the neighborhoods, the children congregate and get them to blow their horn," she said.

Watson responded that nothing would change.

"If you go to a Bearcat football game, you'll probably see a fire truck there. Go to a Springtown game and you'll see one," he said. "We hit every single elementary school campus in ESD1."

Former Willow Park Mayor Richard Neverdousky asked if the annexation into the ESD could improve the city's ISO (insurance services office) rating to a 1 from the 2 it currently has. Connecting with a water supply from Fort Worth increased it from the 3 it previously was.

Neverdousky was mayor when the city switched from a volunteer fire department to paid and when the bond was passed for the public safety building.

"I have an emotional attachment to our fire department, but I have an open mind also," he said.

Neverdousky said if the rating cannot be improved, the annexation would otherwise be a wash.

"It may be costly, but it's effective," he said of the current situation.

Watson said the fire department in Aledo, also a part of ESD1, went from a rating of 7 to a 2 following their annexation.

"All over the district we've lowered it where we can," he said.

Connie Vestal of Springtown, a former member of that fire department for 12 years and a resident of ESD1, is in favor of the annexation.

"There's a lot of changes going on in Parker County right now and sometimes change is hard, but sometimes change is good," she said. "You can still have your firefighters drive by your neighborhood. They're not going to leave you high and dry. They take care of community."

Scott Caron, a newcomer to the area from Kansas City, reminded citizens of what can happen when the funds needed and the services required don't meet.

"Regionalizing your resources is the only answer. There's a tipping point and you're probably there with fire," he said. "Don't freak out and say no to this immediately."