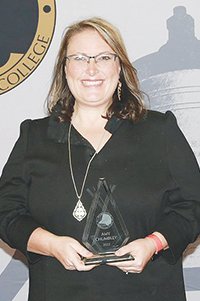 Amy Chumbley is shown with the Jack Harvey Award she received on Feb. 11.
Weatherford College/Special to T 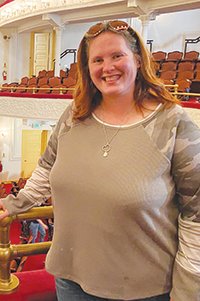 Candice Gables is shown at Ford's Theater in Washington, D.C. during a school trip on Feb. 23.
Special to The Community News
Previous Next
Posted Friday, June 3, 2022 2:38 pm

Amy Chumbley from Aledo ISD and Candice Gables from TCA were among the honorees when Weatherford College celebrated 40 of the finest teachers from across the region at the annual Jack Harvey Academy of Exemplary Teachers celebration on Friday, Feb. 11, at the Doss Heritage and Culture Center in Weatherford.

Chumbley is in her third year as a kindergarten teacher at Coder Elementary School. Gables is a second day history teacher at TCA.

Celebrating its 26th year, the Harvey Academy honors exemplary teachers in the memory of Professor Emeritus Jack Harvey, who taught at WC for 23 years and was considered among his peers as a “master teacher.”

This year’s keynote speaker was Ryan Murphey, the 2017 Teacher of the Year from the Nashville School of Arts and a Grammy-nominated music producer, songwriter, guitarist and vocalist. He is also the son of singer-songwriter Michael Martin Murphey who attended the event and sang an original song with his son at the conclusion of the program.

Murphey holds a bachelor’s degree in creative writing and a master’s degree in teaching and learning. He was raised learning music, but it was the influence of a high school teacher that transformed his relationship with literature and led him to a career in education.