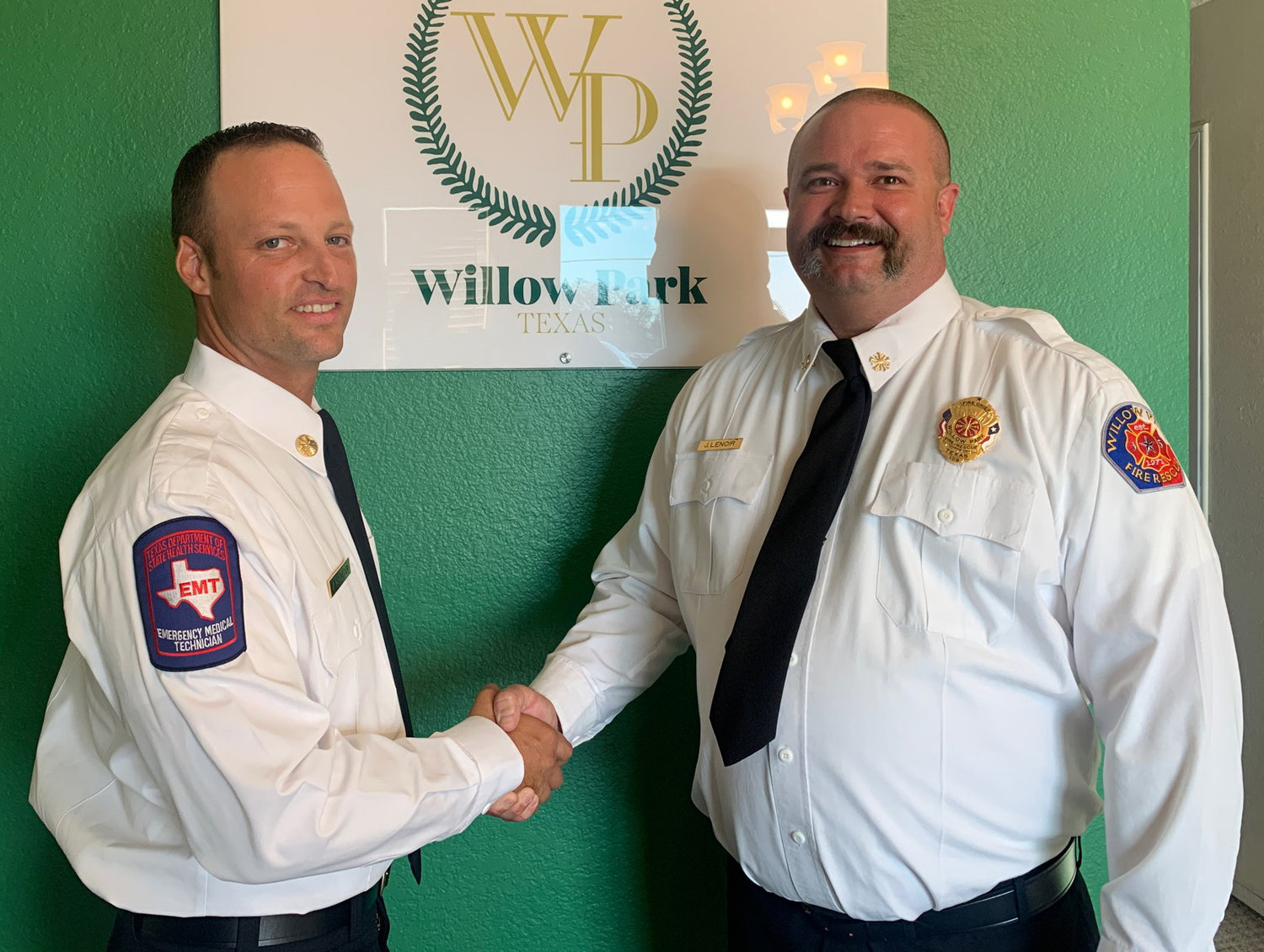 John Schneider (left) will take over as the new fire chief/fire marshal/emergency management coordinator in Willow Park following the retirement of Mike Lenoir on Aug. 2.
Rosealee Hoffman/City of Willow
Posted Thursday, July 14, 2022 10:27 am

"It's been an honor serving this city. It's a bittersweet thing, but it's time to turn the page to the next chapter."”
Mike Lenoir
By Rick Mauch
The Community News

Growing up in the little town of Mart, Mike Lenoir knew from a young age that he wanted to be a firefighter.

"I started my drive for the fire service in the early years when I got to ride in my favorite fire truck, 'Big Red,' a 1978 Ford Boardman. I loved watching that fire truck in the parades and got to ride in the Mart Parade," Lenoir recalled. "I was hooked after that.

"During the yearly 1980s I got to ride in the ambulance with my grandfather, who was a true ambulance driver for the local funeral home when they operated as two entities," Lenoir continued.

In the late 1990s he finally was able to get behind the wheel of Big Red and became a volunteer fire fighter. And thus, his career in fighting fires and saving lives began.

But now, Lenoir is moving on to the next adventure in his life, whatever that may be, as he did not reveal what he will be doing next. At Tuesday's Willow Park City Council meeting on July 12 he announced his retirement as the city's fire chief/fire marshal/emergency management coordinator, effective Aug. 2.

"It's been an honor serving this city," Lenoir told the council and those in attendance. "It's a bittersweet thing, but it's time to turn the page to the next chapter."

The 43-year-old Lenoir came to Willow Park in 2015 as a member of the fire department and was promoted to chief a year later. He will be succeeded by current assistant chief John Schneider.

Lenoir opted not to have a retirement reception.

"I attempted the college mindset in 1997-1998, thinking I was going to be some great music composer, and it just was not my cup of tea," Lenoir said. "I knew if I wanted to be a firefighter, I needed to go to emergency medical services school to get my fire certification."

So that's what he did, working his way up to a paramedic certification. He joined Rural Metro Ambulance Service in Waco. He then started his certification class to become a firefighter at McLennan Community College in Waco, and now has an associates degree in fire administration and an associates in fire science, both from Weatherford College.

"I worked at my local Mart EMS ambulance service to continue to service my community because that was the right thing to do," Lenoir said. "I finally received my first career firefighter job at Hillsboro Fire Department and learned what a career firefighter did on a 24-hour basis."

He continued to climb in the ranks, working his way to the Kennedale Fire Department, learning more about the fire and ambulance service in the North Texas area. His list of certifications is lengthy.

"My favorite quote that I still hold true comes from a favorite movie of 'Star Wars' where the wise Master Yoda tells his student, 'Do or do not, there is no try,'" Lenoir said.

The council held its first workshop concerning the 2022-23 city budget. City Manager Bryan Grimes revealed the preliminary projected revenue from property taxes to be $1.9 million with the projected sales tax revenue being $1.7 million.

Those numbers are up slightly from the projected $1.849 million in property tax revenue and $1.4 million in the 2021-22 budget. Currently, the sales tax revenue is $1.39 million and now projected to be $1.6 million by fiscal year's end.

The next budget workshop, to which the public is invited, will be at 6 p.m. on July 26 as part of the regular city council meeting. A public hearing is set for Aug. 23 and Grimes said he hopes to have the 2022-23 budget finalized by Labor Day (Sept. 5).

In other business, the council set a public hearing for Sept. 13 to discuss the city's land use assumptions, capital improvements plan, and updated water and wastewater impact fees, which will be proposed following an impact fees study.