The story behind the story 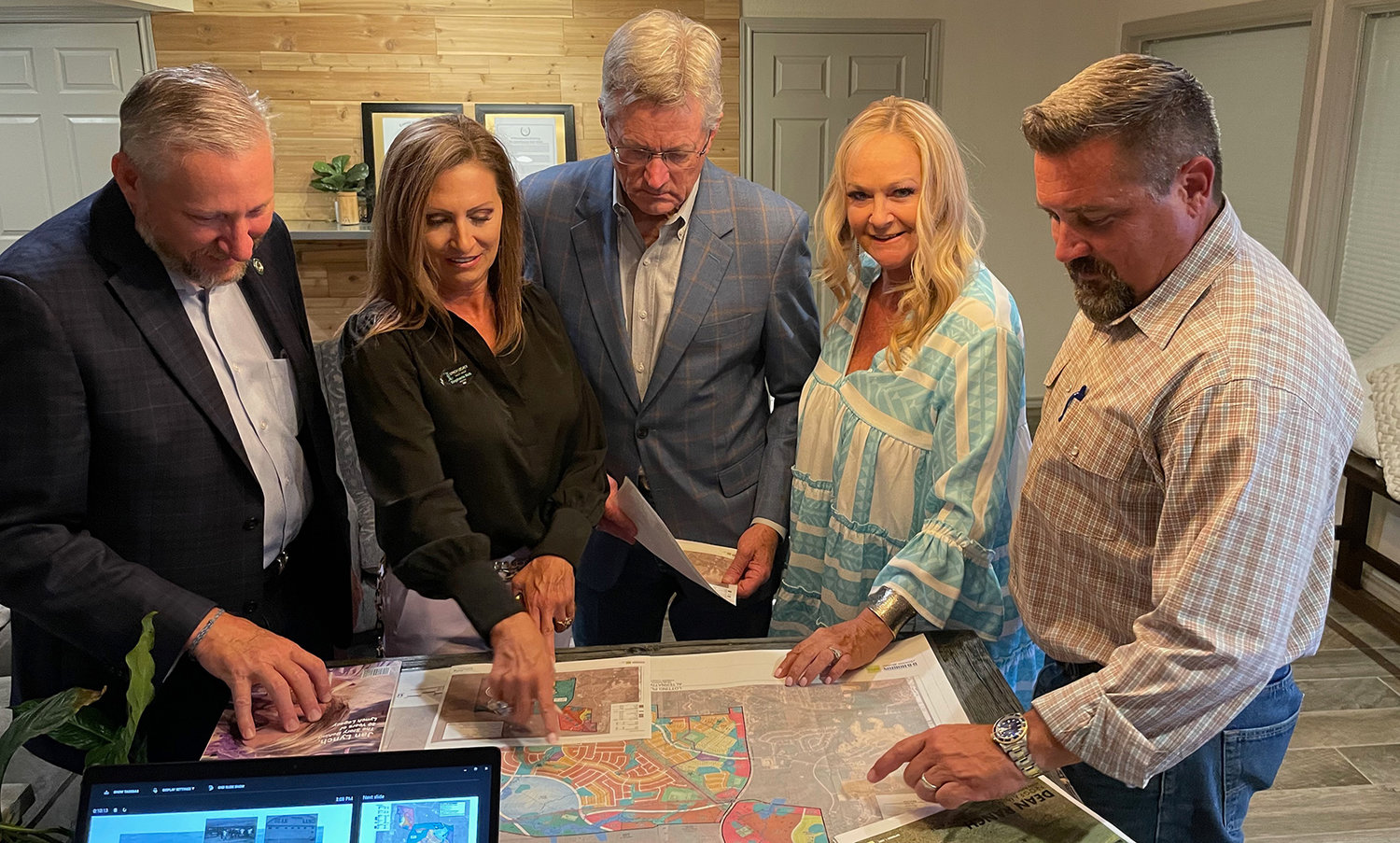 We gained respect because we knew our business. And we knew the business model. We knew it would work out here and we had the connections to the local community and the local people.”
Stacy Lynch
By Randy Keck
The Community News

The recent sale of the Dean Ranch was big news not only in east Parker County, but in the county overall — the largest real estate transaction in Parker County history.

The big news around Aledo last year was the release of  238 acres by the City of Fort Worth to the City of Aledo, providing the city its coveted “front door” on the east side of FM 1187 south of Bankhead.

The untold story is that the two news developments were related, and years in the making.

Here is how it unfolded:

The story begins with Stacy Lynch and Stephanie Rich from Lynch Legacy Group.

The Lynch family, starting with Roy and his wife, Jan, have been doing real estate based in Willow Park for more than 50 years.

Roy passed away a few years ago, and daughter Stacy recently purchased the business.

Since then Stacy affiliated the real estate company with EXP Realty, and Stacy has steered toward a specialty in commercial real estate transactions.

“Stephanie and I have been working with D.R. Horton for probably two and a half years looking for land acquisitions out here in Parker County,” Lynch said.

“When it came time for Dean Ranch to be put this on the market, it was very secret, they weren't going to put it on the market to the whole community. They just wanted to pick out five local brokers. And so we were lucky enough to be one of those,” Lynch added.

Lynch, who has also provided services to the Aledo Independent School District in locating sites for schools, said she felt she was on the Dean Ranch radar because she had reached out to the ranch about a year and a half previously attempting to negotiate a school site on the northwest quadrant of the ranch (northwest of the FM1187/Farmer Road and I-20 intersection).

For the purpose of this story, there are three tracts to the Dean Ranch.
The northwest tract, called Business Centre North, is 187 acres at the northwest corner of FM 1187/Farmer Road and I-20.
The southwest tract, Business Centre South, is 323 acres going south of I-20 on the western side of FM 1187 down to Bankhead.
The remainder, and largest portion, is the 1,493 acres that lie north of Sonic in Aledo up to just north of Bankhead.
Of that 1,493 acres, about 238 acres will be in the City of Aledo and the rest will be City of Fort Worth.
Just to the north of the remainder, the southeast corner at FM 1187 and I-20 is Walsh Ranch property.

About the time the five potential companies were to have a meeting with the Dean representatives, the initial COVID-19 shutdown happened. The Dean Ranch told Lynch they were going to wait to sell it.

Lynch and Rich’s plan was to call Ben Clark if they had gotten the listing, and the disappointed duo gave him the news that the sale was going to be delayed.

But Lynch and Rich continued to work through the shutdown, being classified as an essential business.

“We worked every day,” Lynch said. “We came in every day, we just were trying to find properties to sell. And so I just reached out because we had another buyer for the southwest tract — Stephanie [Rich] had a client that she's had for a few years.”

Lynch called Dean Ranch and asked that, if her group could sell the land at the original asking price, would Dean sell it. They responded in the affirmative.

The real estate duo met with Ben Clark about the main 1,493-acre tract. They contacted Robert Beall, one of Rich’s longtime clients, about one of the other tracts.

Beall is heavily invested in Hudson Oaks, and now works with his son, Logan.

Sammy Klein, another local person and owner of Oakland Floors, was interested in the third tract.

In a short time, these two women put together the biggest real estate deal in Parker County history, and had the entirety of the property under contract before it even hit the market.

To understand how Aledo’s receipt of 238 acres from the City of Fort Worth fits in, we have to go back before the sale of the Dean Ranch property.

According to Lynch, “There was a meeting with the Parker County Economic Development Council back when it first started.”

Lynch said those in the meeting were Kit Marshall, who was mayor of aledo at the time; Nick Stanley, who is now mayor of Aledo; Stacy Lynch, and Pat Lawler, head of the Parker County Economic Development Commission, and Chris Strayer from the Fort Worth Chamber of Commerce.

“This is way before Dean even started,” Lynch said. But the conversation got more serious once the land was under contract.

“I'm gonna give credit on this Aledo piece to two people that I feel were very instrumental — Ben Clark with D.R. Horton and Kit Marshall. It was very important to D.R. Horton and Ben, that Aledo get their front door back,” Lynch said.

The benefit to Aledo residents in this transaction was that the City of Aledo controls the development in that portion of the acreage. The city has recently passed higher building standards that will be in place when Aledo’s portion of the east side of FM 1187 is developed.

Lynch said she believes the Aledo portion will be a master-planned development.

“It won't be ones and twos and who's going in here — it's going to be consistent in nature andI truly trust that the city council is fully capable of making this beautiful and and I think they're going to have guidelines,” she said.

“It’s going to be representative of what the city wants and what people want to see,” Rich added.

And the property, in terms of listings, remains in local hands as the buyers have re-listed the property with Lynch and Rich.

Lynch, who grew up in Aledo, referenced the advantage of having local companies in the process.

“It was coming regardless,” she said. It could have been listed with an out-of-town or out-of-state company.

It has been said that a big glass ceiling was broken with the closing of the biggest land deal in Parker County by a won am-owned agency and two women agents.

But Lynch said that wasn’t what was on their minds at the time.

“We're both very honored,” Lynch said. “Stephanie and I are both very honored to have done this — was that our end goal? No. Our end goal was to to get a deal done and do what we do best, and that’s sell real estate, and and so we kept our heads down and didn't ever really look up until it was done.”

Lynch did say that it is challenging for women in the commercial real estate world.

“We gained respect because we knew our business. And we knew the business model. We knew it would work out here and we had the connections to the local community and the local people. And so I think that really helped,” Lynch said. “I'm gonna give glory to God because I feel like this is not something that I ever, ever imagined would ever happen.

“I think Stephanie and I had been working together four or five years and did we see that this was going to break the glass ceiling? We just would walk through one door and it would take us to the next or take us to the next and and ended up selling the whole 2,000 acres. And so we're really proud. It’s an honor to be in this position, but I truly believe it was God opening doors and we just went through them.”

“We also feel that being in this position — Stacy living here for so long, and I've only been here about seven, but we do feel like it's our responsibility to try as hard as we can to keep Parker County as it is and help it grow the right way. And we take that very seriously,” Rich said.

As will happen, some negative comments about the transaction have been seen on some social media gossip pages.

When asked her response, Lynch said she would be happy to discuss the transaction with anyone.

”Our door is open. We would love for them to come talk to us face-to-face and let us sit down. In fact, we've had some people reach out to us and we have literally invited them to come into our office, sit down and let us explain to them what we know,” Lynch said. “It's something that is coming and if it weren't Stephanie and I doing it, I promise you the Dallas brokers would not give you the time of day. We want to give you our time and our effort and our image and give you an insight of what's actually happening.”