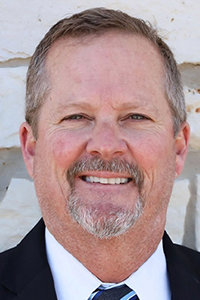 Aledo business owner Brent Gough has been voted in as the new president of the Weatherford College Foundation Board of Directors.

Gough succeeds Bob Glenn, who died shortly after he stepped down as president in May.

After naming Gough president, the group gave Glenn the distinction of president emeritus, the first in the history of the foundation, shortly before he died one week later at the age of 80.

“Bob was one of a kind, no one can replace him,” Gough said. “He inspired the rest of the board to continue his mission of changing the lives of WC students through scholarships and other support.”

Glenn, a past recipient of the WC Alumnus of the Year Award and the Carlos Hartnett Award, had served as president of the foundation since 2014. As a volunteer since his retirement from banking in 2019, Glenn raised more than $600,000 in new endowed scholarship funds for WC students.

Gough, also an alumnus of Weatherford College, has served on the board since 2014, including several years as treasurer, chairing the investment committee. The Graham native earned his bachelor’s degree in business from Tarleton State University and has been in the financial services industry for almost 25 years, now as president of Gough Wealth Management in Aledo.

“Weatherford College was very good to me and is so important to this community,” Gough said. “It’s my honor to help this foundation and support WC President Tod Allen Farmer in all of the great things the college is doing for our students.”

He and his wife, Meredith, have four children and two grandchildren and reside in Parker County. They established the Brent and Meredith Gough Scholarship Endowment several years ago.

For more information on the Weatherford College Foundation, visit www.wc.edu/about/foundation.