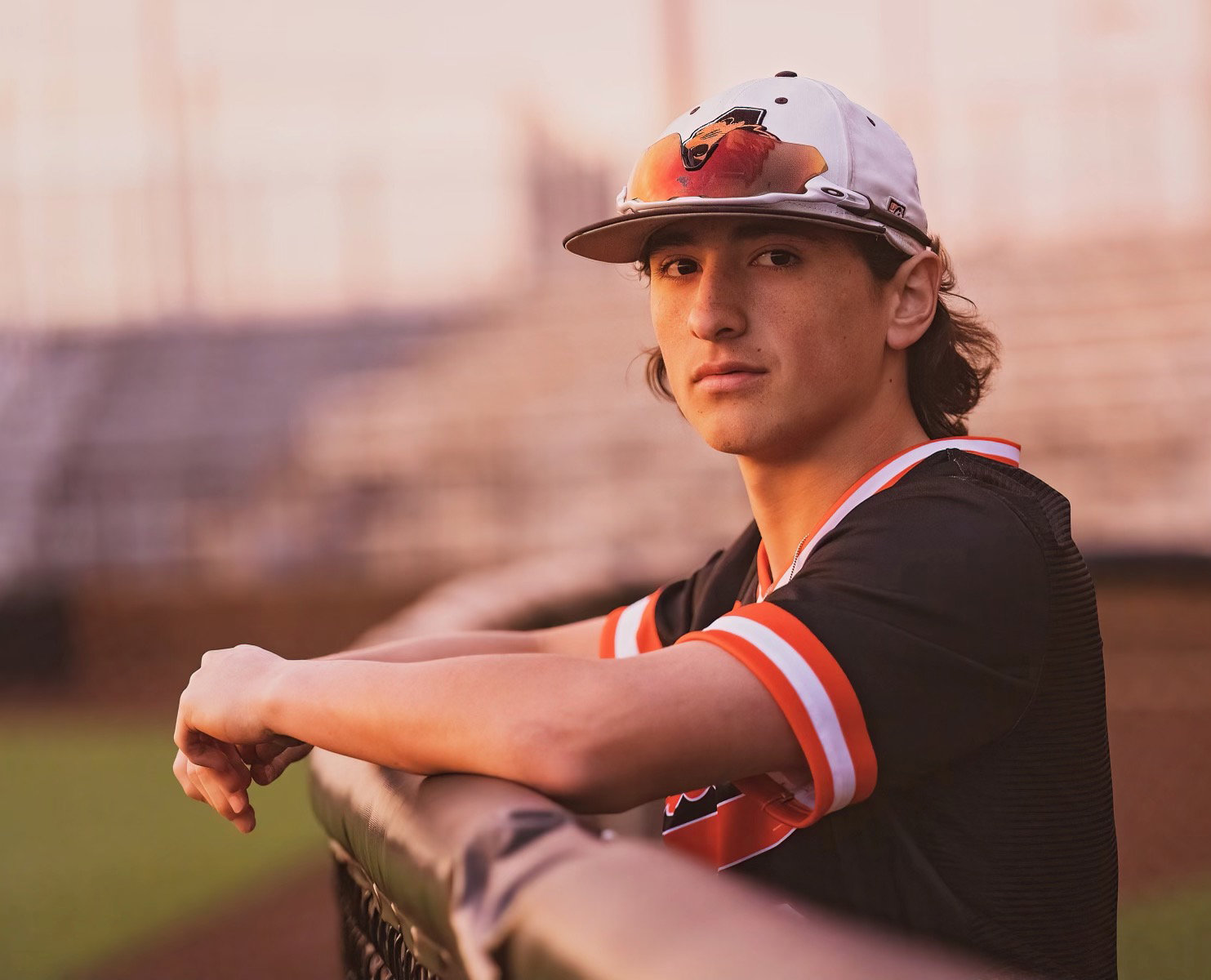 A phrase originating from the mid-19th century says “If at first you don’t succeed, try, try again.” The phrase has caught plenty of meaning in the past 200 years, with many prime examples.

For the past two years, Aledo Bearcat infielder Cade Pulido has truly embodied that phrase. The 2022 graduate overcame a setback from his junior year to completely redeem himself in his senior year.

Pulido started playing baseball at an early age and grew into the game throughout his childhood. Once he moved to his club team, he connected with his future Aledo teammates for the first time.

“I was about 3 and playing t-ball,” Pulido explained. “Then as I grew up I moved into select ball around 8 years old. That’s where I met all my buddies like Ethan, Hunter, Carter, Adrian but then I separated from them and went to a different team.”

After rejoining his classmates for their freshman year, the COVID-19 pandemic prevented the 2020 baseball season from being completed. The early termination hurt Pulido as he was prevented from making a mark on a full season.

“He battled for playing time,” Aledo baseball head coach Chad Barry remembered. “Towards the end of their sophomore year, we start to really say ‘Can they really play for us on the varsity or not?’ If we don’t ever believe that they can then we have to start looking at other options. And he kind of fell into that category in his sophomore year.”

With life starting to return back to normal just in time for the 2021 baseball season, players, fans, and coaches anticipated a full season to take place as tryouts began.

“I worked really hard that whole offseason,” Pulido said. “I knew the situation I was going to be in and that I had to outwork people. During the tryout process I thought I did pretty decent, but we always think that we can do better.”

“We, as a program, try not to put juniors on JV,” Barry explained. “We felt like we had a good second baseman in Guzman and as well Keaton Laidley before he got hurt. We just felt like he had two guys that were the same age as him that would be playing in front of him.”

Pulido was left off of the final cut list, making it an unprecedented spring without baseball for the young infielder. 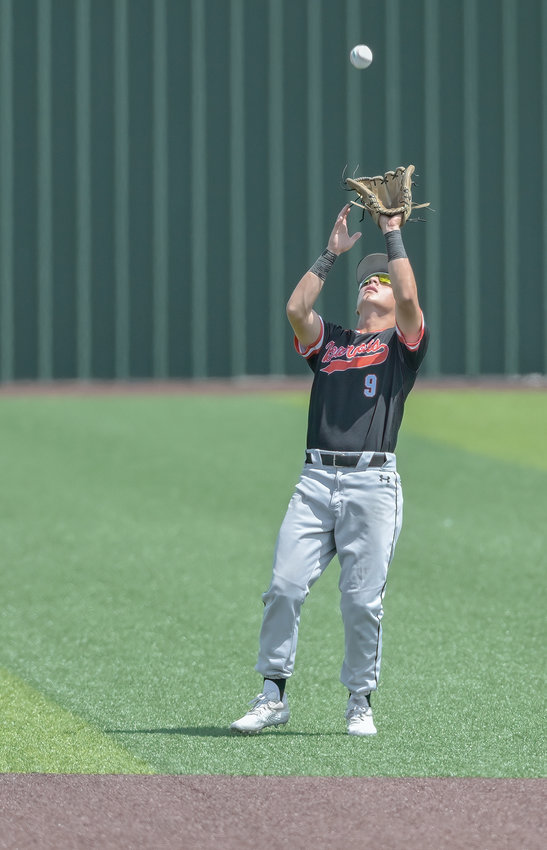 Cade Pulido backs up to cover a fly ball to short right field in the regional final against Mansfield Legacy.

“I got a text from Barry telling me to come to his office,” Pulido said. “I remember thinking ‘Oh no, this is not going to be good.’ I thought he was going to move me down to JV. Ultimately there weren’t enough varsity jerseys and had he put me on JV there would have been underclassmen playing above me. I kind of took that as a wake up call. I didn’t think it was his best decision but I can’t change that.”

However, rather than throwing in the towel and ending his career, he immediately went right back to work.

“It was funny because I was on the field with them every day,” Pulido reminisced. “I was hitting in the cages just to show Barry that I was still working. Then I would go down to the weight room and lift…I never stopped working. From the day I got cut until I made the team again, it was an everyday thing. ”

“Every time you looked around he was in the batting cage,” Barry recalled. “He was playing catch with somebody in the outfield, or he was in the weight room. He took it upon himself to prove me wrong, and he did. When it was all said and done, I regretted my decision.”

Pulido kept working out off the field as the Bearcats marched to the regional final before falling to Amarillo. Still, he kept working to make the roster for the next season.

“What I saw from him was just a year of hard work,” Barry declared. “You could tell he had gotten stronger, he had gotten faster, he had a better arm, he had a mentality about himself. He played with a chip on his shoulder. He felt like every time he stepped on the field, he felt like he had to prove something to everybody.”

Pulido made the team and got opportunities to play in the early tournaments. It was in one tournament game against South Grand Prairie which his hard work and dedication were truly personified.

“Eathan Jaques was throwing a no-hitter,” Barry recollected. “Pulido was playing second that game, and I distinctly remember a play where there was a foul ball behind first base over by the bullpen.”

“At the time I wasn’t really focusing on Ethan’s no-hitter,” Pulido recalled. “It was their leadoff batter and hit this pop fly. Every ball that gets hit, I react and see if I have a chance to get it. When the ball went up, I had no hesitation. I just started running.”

Pulido made a dead sprint from his position at second base to track the ball down and slid feet first, as if he was on ice, to make the catch.

“In my peripheral vision, I could see the fence,” Pulido described. “So I was looking at the ball and the fence and I knew it was going to be close. I slid feet first into the wall instead of running straight into it and then I just made the catch.”

“He was sold out,” Barry said. “He was going wheels-off trying to get to it, and I remember going ‘Wow! What a play.’ But he played like that every time.”

Pulido was used often throughout the rest of the 2021 season and made a solid presence known at the plate, accumulating 18 hits in 68 at-bats for a batting average of .265. He hit three triples on the year, trailing only centerfielder Max Belyeu (4) on the team. He totaled 22 RBI and 17 runs scored for a grand total of 39 runs.

“I’ve never been as proud of any kid that has come through this program as I am of him,” Barry expressed. “His determination, not taking no for an answer and saying ‘I’m going to prove all my critics wrong’ and then going out and doing it. I think it speaks volumes of him and the way he’s been raised and his passion for the game itself. It’s something we need a heck of a lot more of. Regardless of what sport you’re coaching, if you’ve got a bunch of Cade Pulidos your job is going to be a lot of fun.”

Pulido plans to attend Texas A&M-Corpus Christi to study Civil Engineering and hopefully walk on with the baseball program for the Islanders.