Aledo Growth Committee to plan for ongoing influx of students

Application available for community members to join through Aug. 12 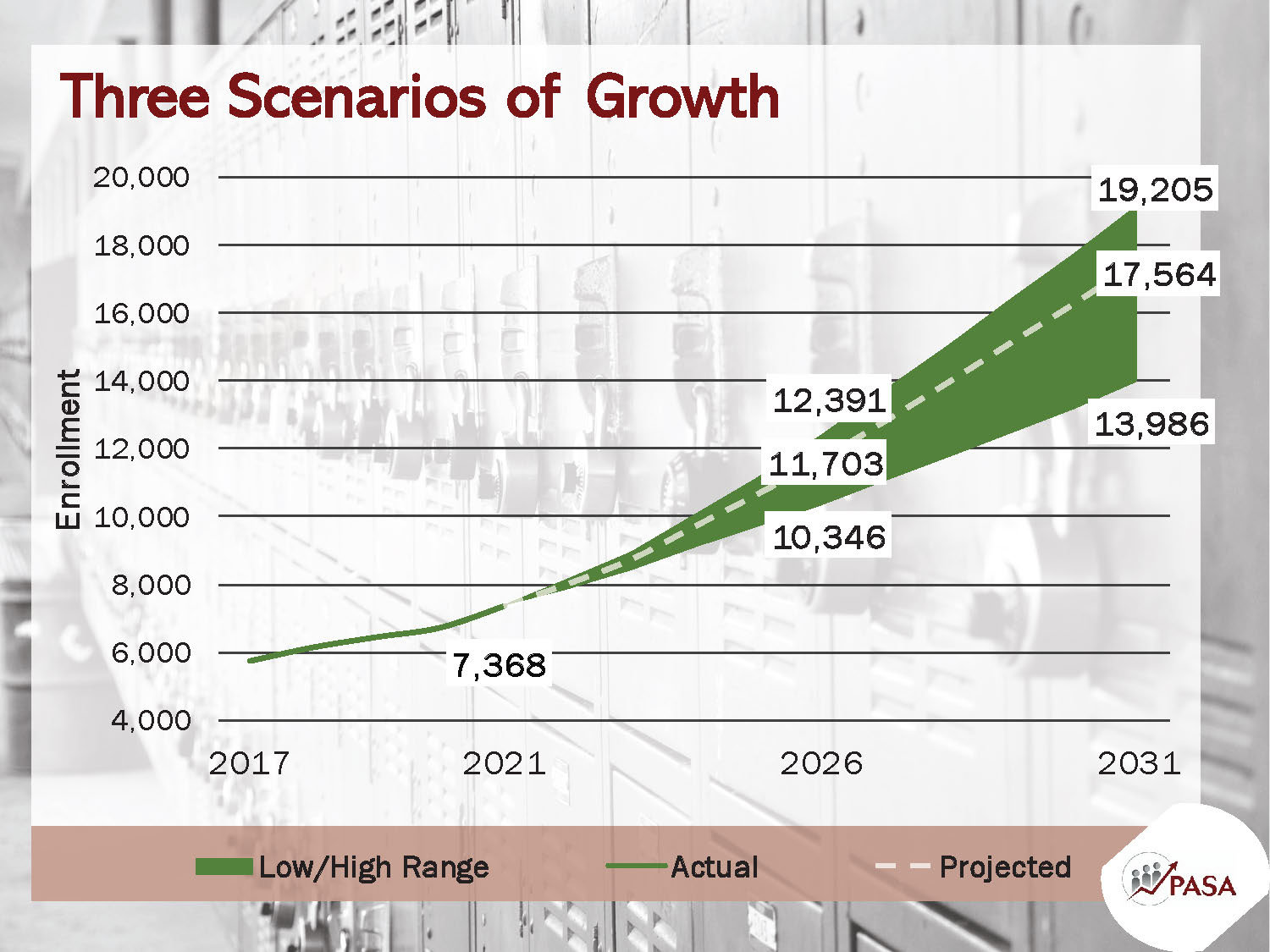 In the low-growth scenario the Aledo ISD student population could still almost double by 2031. In the high-growth scenario it could increase more than 2.5 times.
Population and Survey Analysts p
Posted Thursday, July 28, 2022 9:27 pm

I just want to make sure you guys know that when we hear about what our buildout might be like, we’re not talking about one or two high schools; we’re talking about multiple, probably four or five, depending on what high school is like in Aledo in the future.”
Aledo ISD Superintendent Dr. Susan Bohn
By Randy Keck
The Community News

The rapid enrollment growth in the Aledo ISD was on everyone’s mind when the school board voted to convene a growth committee to formulate a plan for needed future facilities and to develop the inevitable bond proposal that would fund them.

At the special meeting on Monday, July 25, Superintendent Dr. Susan Bohn reviewed the presentation from the district’s demographers in June (See The Community News, July 1, 2022).

“What we’re talking about tonight is moving forward to make sure that we’re planning ahead to take care of the needs of our kids as we grow,” Bohn said, adding that “one of every four kids has moved to Aledo over the last five years.”

Another reality that might be difficult for many long-time Aledoans is Bohn’s look into the far future.

“I just want to make sure you guys know that when we hear about what our buildout might be like, we’re not talking about one or two high schools; we’re talking about multiple, probably four or five, depending on what high school is like in Aledo in the future,” Bohn said. “And so that’s just a little context to give our community with respect to this. I think one thing that is our responsibility, the responsibility of our partners, media partners, and others in the community, leaders in the community, is that we’re in a different type of growth scenario now than we’ve ever been.

“And it’s different for the entire community to come to terms with; it’s not bad, it’s just different. It’s something that we certainly have to plan for, because we know it’s coming.”

Based on data from Population and Survey Analysts (PASA) and current attendance zones, three of the district’s six elementary schools (Coder, McCall, and Walsh) will reach their capacity by the next (2023-24) school year. Another two campuses (Annetta and Stuard) will max out in the following 2024-25 school year.

In fact, overall K-5 student population will exceed the district’s capacity in 2024-25.

In addition, based on projections of new growth, the yet-to-open McAnally Middle School will reach its capacity in four years; overall district capacity for grades 6-8 and Aledo High School will max out in five years.

The board is faced with how to provide facilities for the virtual flood of students expected at all levels in the next 5-10 years, but Bohn pointed out to the board that the task must begin now for the onerous task of planning for secondary schools.

One attribute the school district has in its favor is its handling of bond finances.

Bohn pointed out to the board that through its financial advisors (BOK), the district has saved local taxpayers $48.2 million through managing bond debt. She said BOK has begun an analysis of the district’s available debt capacity for an upcoming bond election.

Another plus in the district’s favor is its historic overall tax rate, which has dropped steadily from $1.5950 to $1.3929 over the past four years.

Bohn’s proposal, which the board adopted, is for an “Aledo Growth Committee” constituted of the following:

The charge to the Aledo Growth Committee is to:

Anyone wishing to serve on the Aledo Growth Committee can apply here. Deadline to apply is Aug. 12, 2022.

More information on the Aledo Growth Committee can be found at https://www.aledoisd.org/agc.

This article appears in the July 29, 2012 issue of The Community News.

DPS Offers Tips and Resources Ahead of New School Year