Bearcats off to 1-0 start 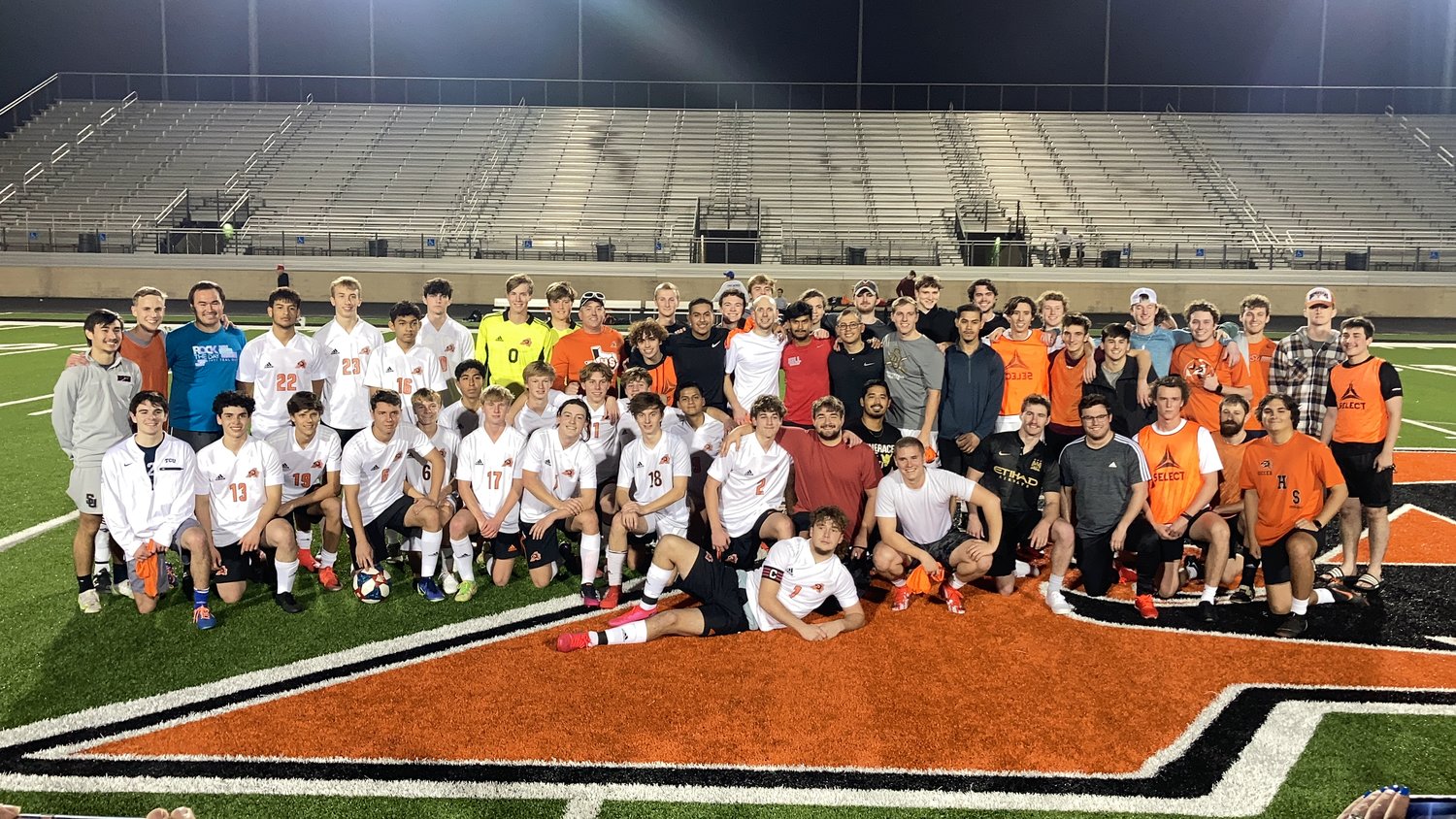 The boys soccer season is officially underway, and the Aledo Bearcats have started off the season the way they always want to. On Thursday, Dec. 30, the team held its annual Alumni scrimmage where all former Bearcat soccer players are invited to come out and scrimmage the varsity squad of that year.

The event has happened 18 times as of this season with a dead even record of 7-7-4 between the varsity and the alumni.

“It’s awesome,” head coach Derek Vierling said after the event. “We’ve got an alum that is now a doctor, he’s married, got three kids, and he scored a goal today. It’s fun seeing that stuff, they’re great men. And it gives us a great chance to see where we are as a team.”

Due to the success in football, Vierling admitted that schools sometimes have a vendetta against Aledo in soccer scrimmages.

“Something I have noticed in the past five or six years, the other schools are so upset with us that they want to play a scrimmage against us like it’s the World Cup Final. They’re just killing us and we’d get hurt physically. We scrimmaged Weatherford and we had a kid go to the hospital with a broken nose. So this scrimmage is a good relief as well as it is fun.”

Early in the second half, Vierling’s son Reid scored a goal that neither one of them will forget.

“It always feels good to score a goal,” Reid said with a chuckle. “Especially against my dad’s team, that’s always fun.”

Reid has watched the program grow as he grew up and sees how special it is for the program to be where it is now.

“I think this is his 22nd year,” Reid said. “He started the program back in the day when it was just a small little town, and a town that’s built on winning. He’s definitely built a program that knows how to win here.”

Just days after the scrimmage, the Bearcats took the field for their first action of the year against the Abilene Wylie Bulldogs.

Aledo dominated most of the match, only giving up a few shots on goal and spending most of the time in the Bulldog end of the pitch. However, first game jitters appeared to hinder the team’s performance as multiple shots went awry, leaving it a 0-0 score at the half. Taylon Kessler had multiple opportunities but just couldn’t drive it home.

In the second half, the Bearcats continued their possession domination creating even more chances. Harvey Keene got in the shot column multiple times but could not find the net. In the 43rd minute, a foul by Abilene Wylie gave Aledo a penalty kick opportunity. Clay Murador took a nice stutter step and buried the shot in the back of the net to give Aledo a 1-0 lead.

The rest of the second half was much like the first, with both teams battling for possession and the Bearcats trying to find their footing offensively. After an injury to Murador took him out of the game, Cooper Trice checked in and scored in the 76th minute when Keene’s initial shot was blocked and the bounce brought it right back to Trice.

From there, Wylie was in desperation mode and could not get anything going by the time the clock hit zero.

“We should have scored a lot more in the first half,” Vierling said after the match. “I think there was one that was not offside but they called it offside, and if we scored that one, it would have probably gotten out of hand. But we got the win, the shutout, and we got Clay back in.”

The Bearcats start off 1-0 on the new year and will be playing in the Colleyville Heritage tournament this weekend.